My Son, the Writer 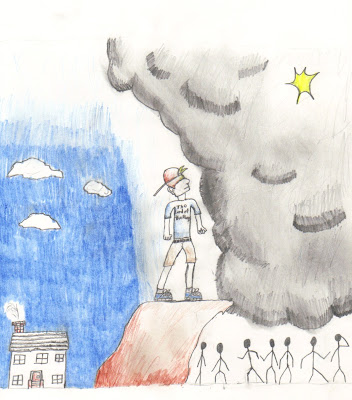 My husband and I homeschooled our youngest son for five years, from 4th through 8th grade--and this was an experience that was a complete joy and privilege for us. So during those years, I was my son's English teacher, and I became aware almost from the get-go that he was quite a gifted writer, especially for one so young.

We didn't homeschool our baby for high school--he attended the same Catholic high school to which his brothers had gone. One of the early assignments that his 9th grade Honors English teacher gave his class was an interesting creative writing project. The students were to create a "book" of sorts, by writing essays or very short fiction stories (unified in theme) that would form the "chapters." They had to make a front cover, compose a concise "about the author" blurb for the last page of the book (complete with a photo), and write up an attention-grabbing synopsis to put on the back cover. They also had to include some readers' comments along with the synopsis, so my baby asked his older brother and me to critique his work. Here's what my son's mommy, in her totally unbiased opinion, had to say about her boy's magnus opus: "A deeply moving and powerful narrative...this talented first time author gives the reader a glimpse into the heart and soul of a boy on the verge on manhood. Terrific!" I know that sounds over-the-top; but seriously, this seemingly mundane English project produced a rather impressive collection of eloquent prose--especially when you consider that it came from the pen (make that the computer keyboard) of a 14-year-old boy. His brother commented," A remarkable debut effort. Very insightful. I couldn't put it down." (Can you tell my #2 son and I were trying to make our comments sound like the kind you find on real book jackets?)

For proof that I'm not just an overly proud but delusional mother, I give you the first "chapter" of my son's "book," with minor details omitted for privacy's sake:

A Hidden Gem
If you are in the downtown area of [our town], go past the highway, turn right at the first intersection--you know the one, where if you go straight, people will mistake you for an employee at Liberty Mutual--and keep going down that road. Keep going, keep going. Eventually you come to a heavily-wooded area. It comes suddenly, as if you were flying a plane over Africa and crashed into the rainforest without warning. Then, after going through a roller coaster made of concrete, on your right you will see a street, my street.

It's a comfortable little neighborhood, not too grand, not poor. It is like a Hershey's chocolate bar: sweet enough to satisfy the wealthiest person's craving, but not too rich to upset the poor person's stomach or checkbook. To an outsider looking in, it is just another street among many others. But as with most great things in this world, sometimes you just need to scratch away the surface and see what's inside.

Driving down the street, there are pleasant houses on either side, all of them tucked behind trees and surrounded by forest, as if the woods were fighting violently to regain their lost territory. Though they look nice, keep going past these imposters. Keep going. Just a little further...There it is! [our address] My home.

It is the last house on the right; a big, white house with black shutters. It is a two story building with a large front yard, big enough to fit five rowdy boys who decided never to grow up. To common passers-by, it is just an ordinary house at the end of some street. And yes, like any home, it is where I sleep, it is where I eat, and it is where I live. But to me, it is so much more than just an inn or a breakfast nook.

It is a familiar face that says, "Hello there! How was your trip?" after I've traveled long distances; a life-long friend that is always there when I don't know where else to go. It is my playground, my home field advantage for all my backyard football games; where our family-famous Wiffle Ball homerun derbies are held. It is my place of study; where I have been schooled for the past five years and still get schooled. It is where I learned about life, about the One who made me, and the One who sacrificed Himself for us.

This is where the seven O'Callaghans* live. And although there are nicer houses on our street, our house is a hidden gem, stowed away from the rest of the world. It is everything I want out of a house. Everything I need out of a home.

(*This is the fictional family name my son used for his stories--but his fiction is otherwise very autobiographical, and he's really talking about the Pearls!)


It is good for this mother to know that, although he's far away now and becoming happily immersed in college life, this is how my youngest son--the writer!-- feels about his family home.
Posted by Laura Pearl at 6:07 AM