We spent last week in VA, checking on our house and catching up with the four boys who live there and their families, and also with our youngest son and his wife, who have recently moved to Nashville and had a little time between jobs and grad school to visit with us. What a great week we had!

I plan to share pictures from that family-packed week in a future post, but today I have a different topic to tackle.  Today I'm talking about school days.

Our oldest son and his wife homeschool their kids, so I don't know their official "start date" for the 2021-2022 academic year. (But I'm happy to report that I'm planning to hold a weekly sewing lesson class this school year for my granddaughters!)  Our middle son's oldest two children started their first week of first grade and kindergarten at a small private Christian school while we were in VA.  Our second-oldest son's firstborn was set to start his first day of kindergarten yesterday, while we were on the road, northward bound.  When we saw him and his family on Sunday, our son told us that his boy's Catholic school uniform is gray pants and a white shirt--just what our boys had to wear at their Catholic grade school back in the day.  Wow, did that bring back memories!

We are back in NY now, where we will spend the rest of the summer keeping tabs on our VRBO rental house (and boating around Lake Champlain).  Thinking about our grandson's Catholic school uniform, I decided to find a picture of his dad wearing his gray-and-white get-up to show my daughter-in-law, and I realized that I had one on an old post here at the blog.  I did some digging through the archives and found that post, written 10 years ago when our youngest son (28 now and married) was about to graduate from high school and I hadn't even become a Grammy yet.  So much has changed in those 10 years!  And yet, with grandchildren it's almost like you get to live those sweet early years with your own children all over again.  In a way, it seems like old times. 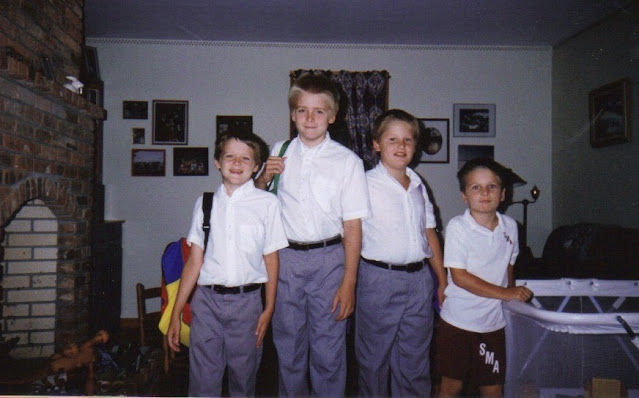 Here's that heart-tugging archived post, if you're interested.  (Meanwhile, I'll just be here crying into my coffee.)

Email ThisBlogThis!Share to TwitterShare to FacebookShare to Pinterest
Labels: grandchildren, life with boys

A Date to Remember, A Life to Celebrate

Yesterday was the 48th anniversary of "Will You Go with Me?"

August 6 is a red letter day on my calendar every year because it's the day my husband and I officially started dating, when we were just a couple of crazy 15-year-old kids way, way back in 1973. (I blogged about this memorable date nine years ago--see link above--and here I am bringing it up again.)

When we were 15, we could never have imagined what was in store for us in the coming decades.  We could never have predicted that we would actually stay together forever and how very blessed we would be.  We were the best of friends, and quite smitten; yet we couldn't know then that we would end up married seven years later, become the parents of five incredible sons, and one day get to play the best role of all, as Papa and Grammy to 17-going-on-18 beloved grandchildren.

We thought 63 was older than dirt, simply unimaginable; and yet here we are.  We blinked a few times and 63 happened.

Youth is marvelous, but fleeting, and some spend their later years trying desperately to hang onto it; but there are perks that come with getting older, gifts one can only receive after numerous trips around the sun.

One such gift was a recent phone call from our oldest son, with the happy news that he and his wife are expecting baby #6, which is especially wonderful after two tragic miscarriages in the past year or so. They have gotten through the first trimester and heard a healthy heartbeat, and we are all over the moon about this precious little soul who will be the 18th grandchild with us here, God willing.  (We also have five wee saints in Heaven, watching over all of us.)

Another such gift was a pair of photos, sent by daughter-in-law Ginger (wife of son #2), of her hubby and our youngest son and his wife. Son #5, who was a captain in the Army, just became a civilian again and is getting ready to start grad school.  He and his wife Babisiu, who will celebrate their second anniversary in September, had some free time before beginning the next chapter of their life in Nashville, and they drove to VA to see all the brothers.   It looks like #5 is trying to emulate #2 with the facial hair; but that (along with his long-ish locks) is actually a mild rebellion after ten years (four of Army ROTC, six of active duty) of having to sport a clean-shaven face and a "high and tight" haircut. 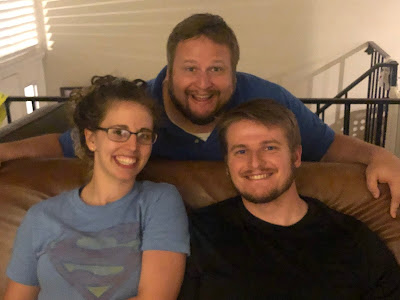 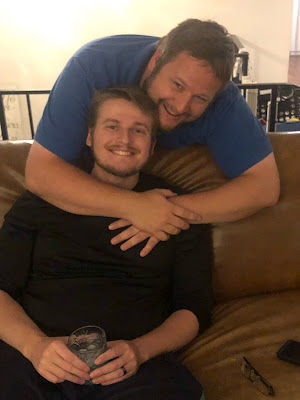 Or a 35-year-old third-born son who poses in matching polo shirts with his six-year-old firstborn son, the oldest of his brood of four. 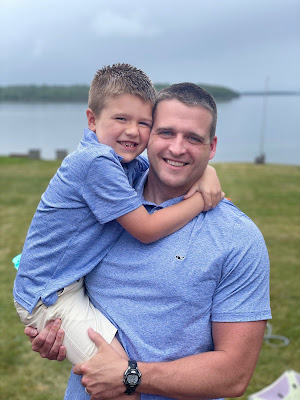 How adorable are those two guys?
I can't sign off without mentioning son #4.  He is the 33-year-old father of almost-four-year-old triplets plus a toddler.  His is a very full and crazy life, as you can imagine, and we are so proud of the way he and his wife have handled it all.
These are my blessings, my life, my joy.  And it all started when the cutest boy I'd ever known asked me to go steady--or "go with"--him, many (I mean many!) years ago.
Posted by Laura Pearl at 7:52 AM 6 comments:

My husband and I have been in Upstate NY since late June.  Four of our boys and their families came up here for a week in early July, but otherwise we haven't been with our gang--and I miss them.  On Sunday, we're heading down to VA to check on our house there, and to break up the long summer and see our kids and grandkids.  All five boys and their families will be there, and I'm extremely excited to reconnect with everyone.
So I thought it was apropos to do a post about our VA house. 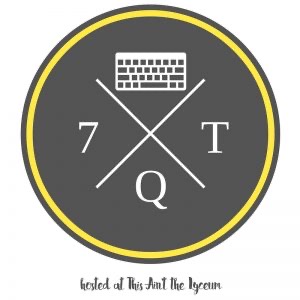 A little over a year ago, just after we’d just finished off our VA basement, we got a discarded wooden fireplace mantle from son #3 and his wife.  (A neighbor of theirs had done a renovation and was giving it away for free, and our kids liked it but didn’t have a place to use it in their new house.)  I love a good trompe l'oeil treatment about as much as anyone, so I decided to take that mantle and create a faux fireplace with a blazing fire in it.  Actually, this was something we had considered doing in the basement of our old house in NH, but we never got around to it.

I  thought I’d post the step-by-step transformation of this mantle project here at the blog.  (I did this a while ago in an Instagram story—back before I deleted my account—so you might have seen it already.) 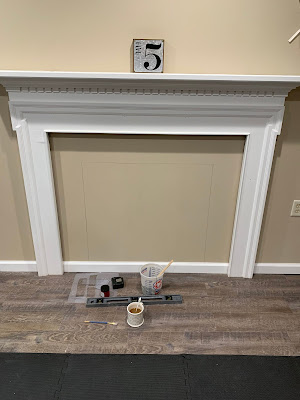 TAKE 1
First step: paint in the gray "mortar" that will go behind the bricks.  (I’m sorry.  The first step was really “get husband to expertly mount mantle to wall.”  I forgot that part!  But as you can see from the first photo up there, he did a great job!) 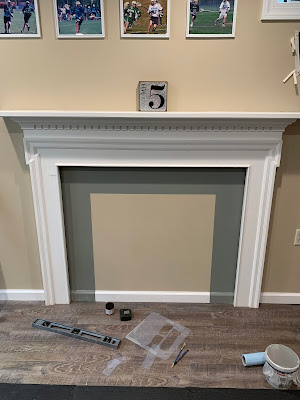 Add the bricks—using a template made by tracing the bricks on the side of our house! 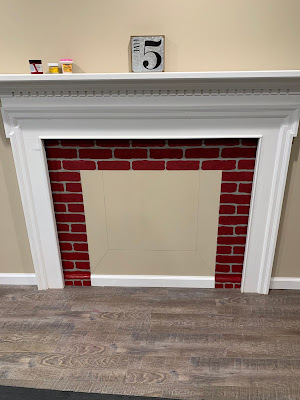 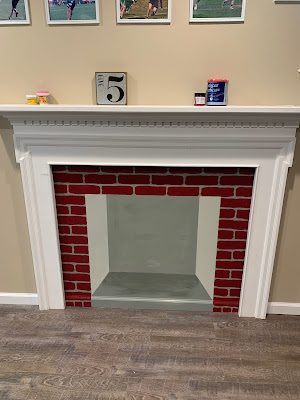 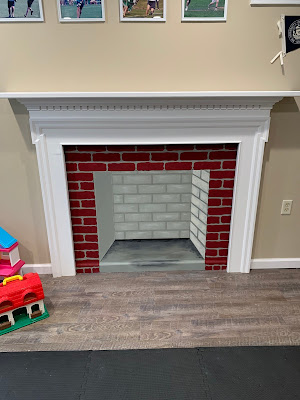 TAKE 5
Make an andiron pattern to trace; sketch in and paint two of them. 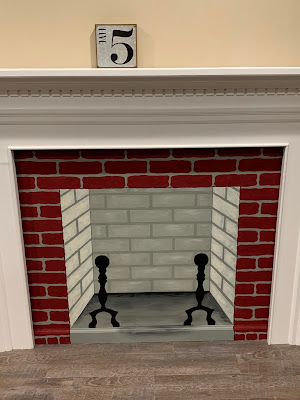 TAKE 6
Blacken parts of the interior bricks to look “sooty”; add logs in the grate. 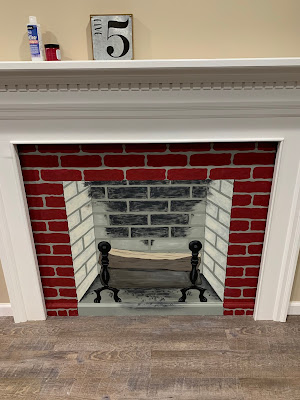 TAKE 7
Now make it burn, baby, burn!  (Sorry, that’s a disco-era reference from the 70’s that young whippersnappers won’t even get, and now you know how old I am.)  I kind of wanted to leave it with the logs unlit (you know, so the grandkids would be safe playing near it—ha ha!).  But my husband definitely wanted a fire. 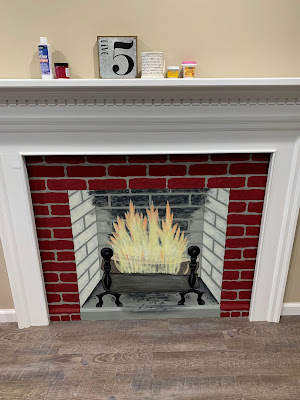 By this point, I was pretty happy with my faux fireplace, and it was essentially finished.   But the flames needed tweaking—they were a bit dull-looking.  So I added some color to enliven them, as well as some more details (such as red-hot embers underneath). 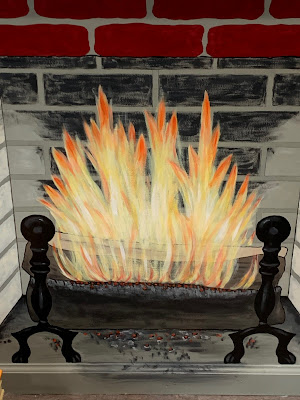 And there you have it: a fireplace safe for our grandchildren’s playroom.  It fills in an empty wall nicely and “warms up" the space considerably! 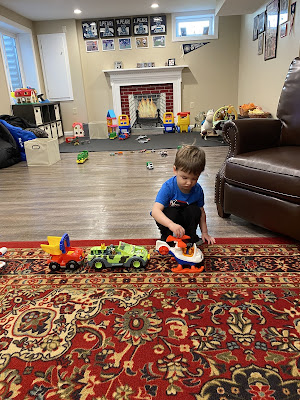 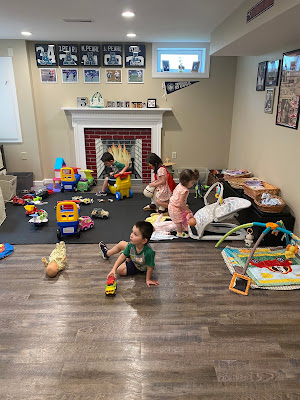 I had originally thought I would distress the bricks a bit, to make them look old, instead of keeping them this dark red.  But I liked the way it looked and decided to leave well enough alone.  (My middle son humorously suggested that maybe I should touch the bricks up a little bit every year that we live here, so they’ll "age" along with the house!  We shall see...)
For now, as far as this “fool the eye” project goes, c'est finis!  Now allez vous, head on over to Kelly's for more 7QT fun.
Posted by Laura Pearl at 7:13 AM 2 comments: