I'm Back, and Life Will Never Be the Same

If you've been checking in here and wondering why it's been almost a month since I last posted something at String of Pearls, there's a very good reason for my hiatus.  On November 25, my dad passed away.  We had known that he was probably terminal, but were hopeful that his chemo treatments were going to buy him some time--even a year or two, according to the best case scenario.  On November 21, however, he got very sick and had to be admitted to the ER; that very day, he got the devastating news that his leukemia was not responding to the chemo and he had at most a week or two to live.
Dad had previously thought he wanted to die at home, and we were preparing to be trained by hospice so that we could fulfill his wishes; but he ultimately chose to spend his last days at the hospital.  I believe it helped him to keep from getting anxious, having all that medical staff nearby.

However, it was anything but lonely there for him.  Every day, it was like there was a party in his room, with talking, laughter, food and drink.  He was always surrounded by loved ones: his wife, his sister, his kids, his grandkids, and even a few of his great-grandkids were there with him, so that he was never alone.  And it was simply an amazing time--joy-filled in its way, if you can believe that.  As one of my sisters said, it was like we were having a big Irish wake...but the guest of honor actually got to be present to party along with everyone else. 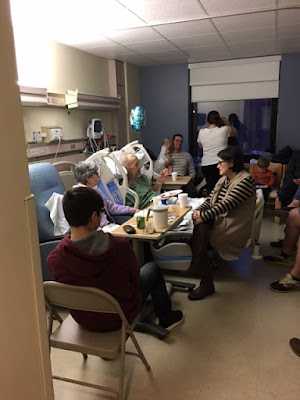 Dad's doctors even allowed him his nightly after-dinner glass of Tia Maria (which he hid under his tray whenever the nurses came around, even though it was written right on his chart that he was allowed to have it!).

Dad ("Bigfoot" to his grandkids and great-grandkids) was completely lucid and fully engaged with those around him, telling lots of stories and even jokes; he kept his sense of humor until the very end.  "How are you doing, Leon?" a nurse would ask; and he would chuckle and respond with a wry, "I've been better."  Here's an excerpt from my Christmas newsletter, just to give you an idea of what my father's passing was like: A whole bunch of us (including his beloved wife, his three daughters and their husbands, a number of grandchildren, and three of his ten great-grandchildren) brought a lasagna dinner to the hospital and celebrated Thanksgiving with him: he smiled and raised his after-dinner glass of Tia Maria for a toast; he regaled us with stories of his first date with my mom and their short courtship before he asked her to marry him.  Then just hours later, not long after midnight, he died with a brown scapular around his neck as we stood around his bed, praying and laying our hands on him.  He was enjoying the company of his family almost to his last moments, and he did not suffer.  His was the holiest, the most peaceful death one could ever imagine.  You couldn’t script a more perfect passing from this earthly life to the eternal one.  God love him; he had a hard life in many ways, but was also very blessed and never took his blessings for granted.  I hope Dad’s enjoying a beautiful Christmas in Heaven, most especially with the father he lost when he was only six.  May he rest in peace!

Dad died one day shy of his 82nd birthday.  He really wanted to make it to the 26th, but God had other plans for his birthday celebration.  I have so much to say about my dad's last days and hours, so much I want to write down and post here because I feel it absolutely must be shared.  But I have been suffering from the most severe writer's block I have ever experienced.  There is so much to say, and I fear that no matter how hard I try, I won't be able to do the story justice.  But in the days to come, I'm going to force myself to sit in front of this computer and try to get it all down, while the details are still fresh enough in my mind.  I don't want to forget one minute of it...but actually, if I live to be 100, I don't think I could ever forget it.  The experience of watching my dad face the end of his earthly life with such courage and peace was profoundly life-changing for me.

I had our Christmas cards printed up months ago, because for once we were ahead of the game: we had a great family picture, with--miracle of miracles!--all 18 of us together (including all 7 grandchildren), since we'd had the forethought to have a professional photographer take pictures during our week-long family reunion this summer at our Oyster Haven retreat on Lake Champlain.  But I haven't had the heart to finally start addressing the envelopes and getting them in the mail.  Today, I am forcing myself to do so. 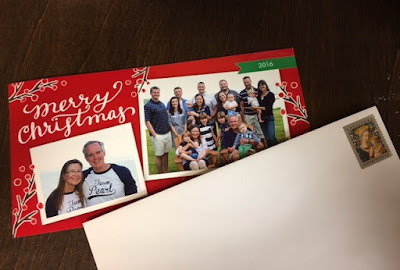 And in the coming days, I will post more about my father and his extraordinary passing from his earthly life to his eternal one.  Until then, God bless you and yours throughout this holiday season and always.
Posted by Laura Pearl at 1:46 PM 24 comments: