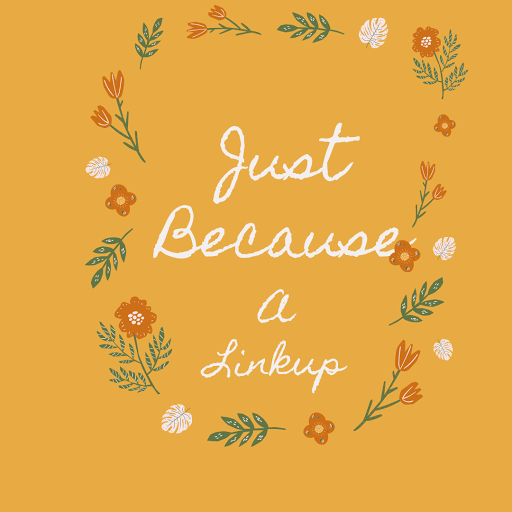 This is becoming a huge favorite of mine--this "Just Because" link-up with Rosie over at A Blog for My Mom. Back in 2011 when I started my little String o' Pearls (the blog formerly known as String of Pearls), Rosie was one of the first Catholic bloggers I discovered, followed, and corresponded with.  I'm so glad that she's still here, when so many of the other gals I used to hang out with in the blogosphere have abandoned this platform for the more popular, higher visibility world of  Instagram (which I kind of did, too, I must admit--that is, before I decided to give up my other social media accounts, cold turkey).  Thanks, Rosie, for sticking around, and for giving the rest of us die-hard bloggers a place to connect each week!

I mentioned in a post not too long ago that my husband and I are doing Ascension Press's Bible in a Year with Fr. Mike Schmitz.  Wow!  Just wow.  I can't recommend this podcast series highly enough; I'm telling you, it has been kind of life-changing for me.  As a cradle Catholic who loves and tries to live her Faith, it's embarrassing to admit how little time I have spent in my 62 years on this planet actually reading the Bible (and I'm a person who LOVES to read!).  I am learning so much, and I can't think of a better teacher than Fr. Mike, who explains each day's readings with gentle humor and enormous compassion.  And boy oh boy, do we humans need a lot of compassion and forgiveness!

Human beings being prone to sin is not a new concept; one need only to read the Old Testament to understand how very fallen our nature really is, and how much we need God.  I look around the world today and am shocked and dismayed by how far from God and His teachings it has wandered; but reading the Bible makes me realize that what we are seeing these days is nothing new.  From the earliest days of human life on earth (pretty much on day one we had the Adam and Eve debacle), this turning away from God has happened over and over and over--indeed, we are a "stiff-necked people."   God's chosen people, the Israelites whom He brought out of slavery in Egypt and promised a land flowing with milk and honey,  kept messing up--big time!--and then desperately beseeching His forgiveness and help.  And time after time, God in His infinite mercy saved His people from utter disaster.  The tale of human history that the Bible tells illustrates beyond a shadow of a doubt that God gave us the Ten Commandments for our own good, not to make our lives harder but to make them infinitely easier.  It's only when we break those commandments that we suffer in body, mind, and soul.

Anyway, today is day 97 out of 365, and we've already read through Genesis, Job, Exodus, Leviticus, Numbers, Deuteronomy, Judges, and Ruth, with portions of Psalms and Proverbs mixed in there, and we are currently going through the first book of Samuel. And I have to say, I have become a great fan of Ruth, about whom I knew very little before starting this Bible in a Year study.  The Book of Ruth is just four chapters long, but it made quite an impact on me. 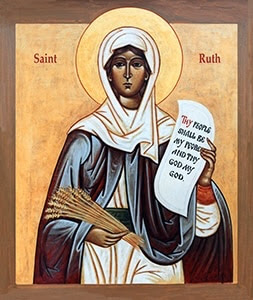 You probably know the story of Ruth already; but I'll give a quick synopsis of it here anyway.  An Israelite man named Elimelech (husband of Naomi) and his two sons, Mahlon and Killion, all die, leaving three grieving widows.  Ruth, the widow of Mahlon, is a Moabite.  She was raised in a pagan family but is drawn to the faith of her husband's family. Naomi loves her daughters-in-law very much, and they in turn love her; but nonetheless after her sons' deaths she encourages both of them to return home to their parents, so that they will not be destitute.  But Ruth is so devoted to Naomi and her new faith that she refuses to return to her own people.  "Whither thou goest, I will go.  Thy name shall be my name, and thy God my God," declares Ruth.

Ruth is considered a model of bravery, faith, and obedience, and she is rewarded for these traits.  She is determined to support herself and Naomi and goes to work for a man named Boaz, who is a kinsman of her late husband, toiling in his fields from morning 'til night.  Boaz ends up marrying Ruth, and from their line comes their great-grandson,  King David.  And of course, this means that Jesus is a direct descendant of Ruth's.

After we finished the Book of Ruth, I told my husband that I thought I should make my five daughters-in-law read it, if they haven't already.  You know, as a reference, as a guide for how to act if you want to be Mom Pearl's favorite.  Ha ha!  (Seriously, though, I would never ask my girls to leave their people for my sake; but I know that they would do just about anything for me other than that, and I am not exaggerating when I say that I am an exceedingly lucky mother-in-law. And I have five favorite daughters-in law.)

Here at the blog, I've named my girls Regina, Ginger, Preciosa, Braveheart, and Babisiu. I think perhaps I shall rename them Ruth 1, Ruth 2, Ruth 3, Ruth 4, and Ruth 5 (with their numbers corresponding to their husband's birth order).  What do you think? 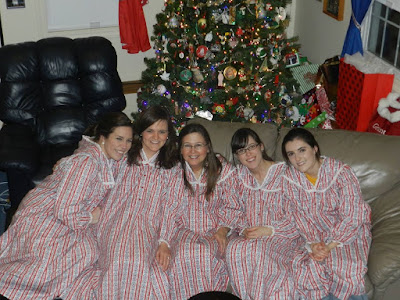 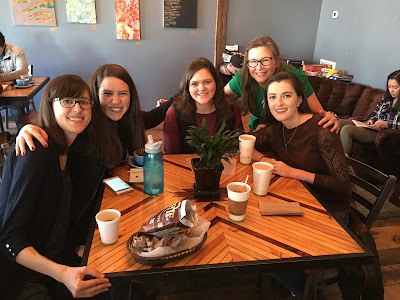 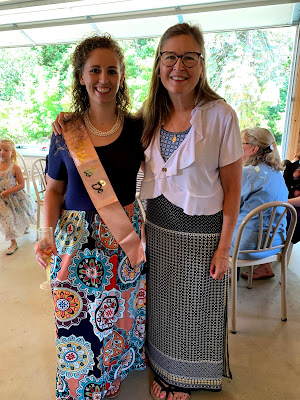 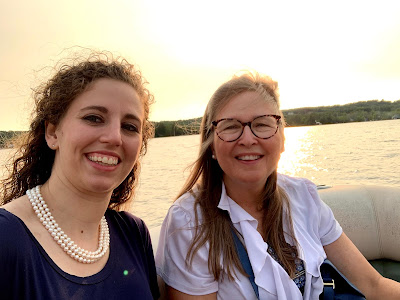 I wish I had a picture of all five of my daughters-in-law together, but unfortunately I don't.  (Babisiu/Ruth 5, in those last two pictures, just joined us in 2019, and she and our youngest son are the only ones who don't live close-by in VA. YET.  #goals)
I'm ashamed to admit that I always thought that familiar line, "Whither thou goest, I will go," was meant to be romantic.  It reminded me of something one of the Bronte sisters might have penned for a desperate female character to say to a handsome and mysterious love interest who was about to leave her behind.  But instead, it is actually a much more deeply meaningful sentiment than any you might find in a fictional love story.  Ruth's refusal to leave Naomi is especially poignant when you realize that at that time, in that part of the world, if a widow didn't return to her family in order to find a new husband among her kin, she would be destined to a life of poverty and loneliness. Ruth was brave enough to face such a future if necessary, out of love for Naomi and devotion to her God.
I just love hard-working, self-sacrificing, God-fearing Ruth.  She's my new favorite Biblical heroine.  And I bet she was Naomi's favorite.  [Insert winky-face emoji here.]
That's it for me. Now whither shall thou goest?  How about thou goest on over to Rosie's?
Posted by Laura Pearl at 11:56 AM

Email ThisBlogThis!Share to TwitterShare to FacebookShare to Pinterest
Labels: daughters-in-law, Faith, Just Because, The Bible in a Year