I don't have much time to blog today, because I'm going down the street in a little while to have coffee with one of my neighbors.  She has three young daughters who are students at the Catholic school our boys attended (many moons ago!).  They're preparing a big celebration for the school's 100th anniversary, and she wanted to get together with me (someone from the old guard) to see if I could offer any insights.  I'm looking forward to sitting down with her and talking about an institution that played an enormous part in the lives of my sons when they were growing up.  The older four attended this school from K-8, and our baby went there from K-3 (before we decided to homeschool him for grades 4-8).  And truthfully, I'm just looking forward to visiting with this nice gal--and drinking coffee, of course!

With Halloween around the corner, I've been thinking of all the costumes my boys used to wear and how much they loved the whole trick-or-treating rigmarole.  My husband and I have never been into those gruesome, bloody get-ups--ghosts, ghouls, goblins, and such; we liked the cute and harmless costumes best.  Here is what our crew looked like before we took to the streets on Halloween night, 1988: 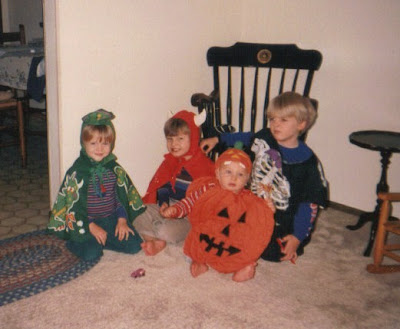 Son #1 (5) is trying his best to make himself look intimidating in his skeleton costume, but he's really only managing to look sort of grumpy.  (He probably is grumpy, because he realizes that he's not a very scary-looking skeleton!)

Son #2 (not quite 4) is the one wearing the horns--and this costume suits him to a T, because he could be a little devil from time to time.  Note that he's giving you his most devilish smile.  (Are you scared yet?)

Son #3 (2 and 1/2) is probably wondering how in the world a cape is supposed to make him look like a dragon; but this was a happy-go-lucky kid with an insatiable sweet tooth, and he would have worn anything I put him in if it meant he was going to get candy.

And son #4 (9 mos.) is just sitting there being round and chubby, like the jack-o-lantern he's meant to be, wondering what in the world is going on.  I could eat him up.

Each of these costumes was made from a pre-printed panel I purchased at JoAnn's (with the exception of the jack-o-lantern, which I fashioned on my own for my oldest son's first Halloween).  They are not the most creative costumes, but they got the job done: candy was procured, and the people rejoiced.

I can hardly wait to see my twin granddaughters in their Halloween costumes!  Now that will be a treat!