I hope I'm not losing anyone out there yet.  The subject matter of my recent posts--my grown sons as young boys in their childhood Halloween costumes--is thoroughly engaging as far as I'm concerned, of course.  I just hope my readers (all twenty-something of them!) won't drop "String of Pearls" like a fun-sized Milky Way bar into a pumpkin-shaped plastic bucket.  (Did that simile work?  Or should I just have stuck to the old familiar stand-by "like a hot potato" instead?)

ANYWAY, this blog is now officially dedicated to the cute-little-boys-in-Halloween-costumes theme until October 31, per the request of two of my girls (my girls!  I have girls!  After raising only boys, I now have girls!).  As noted on Wednesday, both my daughter-in-law and son #3's girlfriend have asked that I keep this party going until the holiday is over.  So that's the plan, and my mission now is to accomplish this without boring everyone.

Okay then, here's a photo from 1996 that makes me smile every time I look at it: 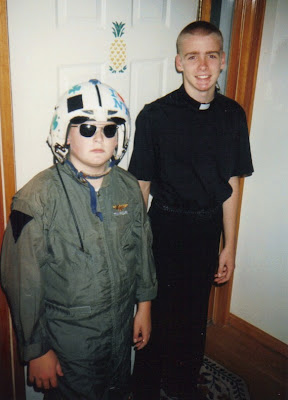 This one is a little different than the photos I've been posting so far, though, because these boys of mine were not dressed up to go out trick-or-treating here.  They were on their way to a junior high Halloween dance at their Catholic grade school.  So these killer costumes were not for the procurement of candy; they were for the ladies.  (Parents of small children, be forewarned: you're going to blink, and suddenly your precious babies are going to be asking you to drive them to grade school dances...and then they're going to be in high school, and they'll drive themselves.  It happens, and there's nothing you can do to stop it.)

My contribution to these awesome costumes was a big goose egg.  All I had to do was go up into the attic and unearth one of my husband's old Navy flight suits and one of his old helmets, rustle up a pair of cool-looking shades, and presto--son #2's very macho costume was complete.  He was transformed into an almost-12-year-old Top Gun fighter pilot.  And if I remember correctly, our parish priest lent my eldest son (13) a shirt and collar for the occasion.  Father may have believed (or hoped) at the time that this pious altar server would one day have a calling to the priesthood, but my boy ended up being called to a different vocation.  He's married now, and the father of twins with another on the way!

Ah, good times...good times.  These old pictures are so much fun to look at.  (Aren't they? And just think, there are more costumes to come!  Hello...hello...are you asleep or something?)
Posted by Laura Pearl at 7:23 AM