Okay, posting that adorable picture of my four oldest boys dressed up for Halloween yesterday was so much fun for me that I ended up looking though my photo albums to find some other costumes from yesteryear, and I unearthed this little gem from 1996: 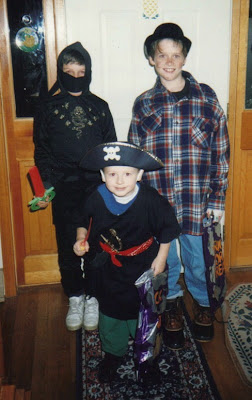 That Halloween, son #3 (10) decided to fall back on that go-to favorite of trick-or-treaters everywhere, the hobo.  All I had to do was buy him a derby-style hat (the millinery choice of hobos worldwide) at the party store, blacken his cheeks a little, cut the fingers off of an old pair of gloves, and lend him one of his father's over-sized flannel shirts.  Easy-peasy.

Son #4 (8) just had to be a ninja.  His was one of the few store-bought costumes I purchased over the years, because I didn't know exactly what a ninja costume was supposed to look like and this one was cheap.  He loved that costume, and I believe he wore it the next Halloween as well.  If it still fit him, I think he'd wear it today.  (He remains quite enamored of ninja culture.)

Son #5 (3) is an adorable little pirate here--YARRRR! For his getup, all I had to buy was the pirate hat and a plastic swashbuckler's sword.  The rest was achieved with an over-sized t-shirt and a bandana belt tied at the waist.  He was your typical little boy, so I think he wanted to be a pirate mostly because that meant he got to carry a sword.

My mom was the Halloween costume-maker extraordinaire.  I remember when I was about 7 years old, she fashioned an award-winning Raggedy Ann costume, complete with a red yarn wig that she designed herself and made by hand.  I don't know how she did it, with five small children born in a six-year span.  She was, and is, the "Energizer Bunny."  When it came to Halloween costumes for my guys, I never put as much effort into the process as she did.  I give her lots of credit.

But these three boys were pretty cute trick-or-treaters just the same, don't you agree?
Posted by Laura Pearl at 9:55 AM