Okay, for those of you who've been waiting with bated breath to find out how my squirrel problem was resolved, you'll be happy to know that at about 11:00 Monday morning, two young men from Animal Control came, and within about ten minutes they'd caught my little midnight visitor.

I thought I'd managed to get the squirrel contained in a small area of one of our bedrooms; but when I opened the door a crack to check on him after I woke up from my shortened sleep, I saw that a vase I'd had up on a high shelf had been knocked to the ground, so I knew he'd escaped from confinement and had been moving about throughout the night. I was afraid to even enter the room at this point--squirrels sometimes have rabies, you know--so I closed the door and waited for the professionals to arrive.

When these two young outdoorsy-looking guys showed up, wearing thick suede work gloves but carrying with them no equipment at all (I imagined they'd at least have a big butterfly net or something), I asked them what they were going to catch the squirrel with. They smiled and one of them replied, "Our hands." Of course! Why didn't I think of that? The two of them went upstairs and closed the door to the room behind them, and as I listened outside, I heard all kinds of bumps and thumps and bangs, furniture being moved, and the two of them chuckling and saying things like, "Whoa, he's a fast one." Eventually, they emerged and, sure enough, one of them was holding the culprit in his gloved hands.

Now that the squirrel was safely in the hands of the experts and no longer a threat to me, I was a lot braver, and the furry little guy looked completely harmless and unbelievably cute. So of course, I wanted to take pictures of him. (The Animal Control guys were actually very nice about it, and held him up for me while I snapped away.) Really, look at this face: is it adorable or what? 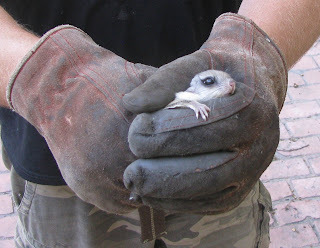 If this had happend when my boys were young and living in the house, they'd probably have wanted to keep him as a pet. In fact, if my sons are reading this right now, they're no doubt thinking this whole episode was "SWEET!"

The two guys put the squirrel in a little wire cage and asked me if I wanted him released in my yard, or if I wanted them to take him farther away and let him go. I was worried that he was a baby and needed his mother, and if so, they should leave him near my house--and that's when I found out that he wasn't a baby squirrel after all. They told me that he was a full-grown adult flying squirrel, which is a lot smaller than your typical gray squirrel. The unusually large eyes that I commented on in yesterday's post are one of the features of this particular nocturnal animal. He also had a flat, rather than a bushy, tail, and thin flaps of skin connecting his front and back paws. When I was chasing him around in the wee hours, I thought that he was sort of strange-looking; however, I never guessed that he was a flying squirrel, because I didn't even know that we have them in our area. I was informed that he most likely gained entry into the house by gliding down the chimney, which explains the sudden noises I heard downstairs that had me thinking someone had broken into my house.

One of the Animal Control guys told me that I was lucky--because if I was going to have my home invaded by a squirrel, this was the kind to have. Flying squirrels, I found out, are quite docile. (If I had known that going in, I thought with dismay, I MIGHT have had the guts to try to grab him myself...no, never mind; I still wouldn't have.) These little squirrels rarely do much damage, either, whereas a regular gray squirrel would probably have destroyed the room. He told me that he and his partner have been called into houses where squirrels have chewed away the moldings around the windows in their efforts to escape. That made me remember the time when my sister-in-law's vacation home was trashed by a couple of gray squirrels that had gotten down the chimney, wreaked havoc, and died near the fireplace. She'd had to call this company known for cleaning up crime scenes to take care of the awful mess those critters left in their wake. So I guess I was lucky that the squirrel who found his way down my chimney Sunday night was a meek and mild little flying squirrel. He'd knocked over a vase (and it wasn't even broken), chewed on a basket, and left me a tiny present on the rug. But otherwise, once he was gone it was as if he'd never been here. 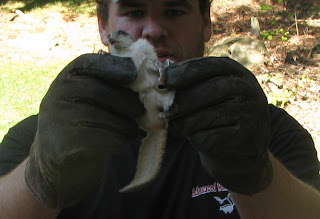 So in the end, it was win-win: the squirrel survived, I survived. The only unfortunate part of the story is that when the Animal Control people come to your home to remove wild things for you, it isn't free. And it isn't cheap. But I have no idea what kind of strategy you're supposed to employ to catch a lightning-fast little creature like that. If it wasn't for those guys, that thing would still be zooming around, finding tight little places just out of my reach in which to hide, and I'd be a basket case. It was worth it to me to pay for expert services to deal with a situation like this; you just can't put a price tag on peace of mind.

(Forgive me for the title of this post. It alludes to an Angelina Jolie movie from years back called "Girl Interrupted." Although I never saw it, I'm guessing it was terrible.)

Email ThisBlogThis!Share to TwitterShare to FacebookShare to Pinterest
Labels: animals