Well, I had an interesting--make that terrifying, alarming, awful--night last night. To begin with, it was my first night sleeping alone in my house again in several weeks. If you've been reading this blog, you know that my husband and I have been on the road, moving our daughter-in-law and our twin granddaughters east, and then staying with her until the joyful return of our Army captain son from deployment. We finally got back home three days ago, and then yesterday my man left for a six-day trip. So last night, lying in bed by myself, my fertile imagination was conjuring up all sorts of scenarios involving intruders with evil intent and I was having trouble settling down to go to sleep. I was acting like a real Nervous Nelly: I got up and puttered about; I read for awhile; I watched parts of the movie "Mommie Dearest," because it was either that or "Extreme Hoarders." (Have you noticed that television these days is a bit of a wasteland?)

Anyway, at about midnight, I muted the volume on the TV because I was sure I heard noises inside the house--exactly the kind of noises a person would make if he was tippytoeing around downstairs--and for once, I didn't think I was imagining them. At first, I didn't know what to do. I told myself that it was probably just the house making its usual creaky noises, the ones that seem so much louder when my husband isn't home with me. But boy, it sure did sound like something else this time...Heart pounding, I grabbed my cell phone and began to dial 911, but stopped myself. I hated the idea of having the police waste their time coming out to the house on account of my overactive imagination (something, regrettably, that I'd done once before, when we were new to this neighborhood). So I decided instead to go downstairs, turn on all the lights, have a look around, and put my fears to rest. Otherwise, I was going to be up all night worrying.

You know how in scary movies, a young girl will go alone in the dark to investigate when she hears the sound of an intruder in the night? And the killer is waiting for her in some darkened corner? And you want to yell at your television set, "What are you DOING?! Don't go!" I never could figure out why she didn't just hide under the bed, curled up in the fetal position. But I was about to do the stupid-girl-in-the-scary-movie routine myself. With my pulse pounding in my ears, I grabbed the trusty six-foot-long lacrosse defense shaft (essentially a lethal metal weapon) that I keep just under my side of the bed for protection, and I went downstairs. I figured it was better to do that than to stay upstairs all night with my heart in my throat. Just as you would guess, everything was in order. The doors were still locked. There wasn't a burglar or murderer in sight. Phew! Silly me.

I got settled back in bed, but I was still a little jittery and I wasn't quite ready to turn out the lights. I hoped that watching some more of "Mommie Dearest" would do the trick and help me to doze off. Then I realized that watching that movie on such a night was a huge mistake, because Faye Dunnaway as Joan Crawford is downright frightening. So at about 12:30, I opened up my book again and tried to read. I was lying there in bed, and suddenly out of the corner of my eye I saw a gray shadow streak across the carpet in my bedroom. Before it disappeared behind my dresser, I got a quick glimpse of it, and realized to my horror that it was a baby squirrel. (Remember that scene with the squirrel from the movie "Christmas Vacation"? Suddenly, I understood the Griswolds' terror.) I don't know how in the world that critter got into the house. The only thing I can figure is that before I went to bed, when I opened the front door and turned on the porch light to check and see if the mums I have in a pot out there had survived the benign neglect they've received the past few weeks, he must have streaked inside, right past my feet, without me noticing him. But how he got in was neither here nor there; now, this was my reality: it was the middle of the night, my knight in shining armor was on a plane to Europe, and I had no idea how I was going to get rid of this nocturnal breaker-inner.

Let me tell you a few things about baby squirrels: 1) They are very cute. They have enormous black eyes, eyes that they need to grow into, eyes that are way too big for their bodies. It makes them look like stuffed animals or adorable cartoon illustrations from a children's book. It is because of this that, although I probably should have, I could not whack my furry little squirrel intruder with the metal shaft. I simply couldn't do it. He made me furious and brought me to tears of frustration, but there was no way I was going to kill him. 2)They are very quick and fast. This baby squirrel and I played a game of cat-and-mouse until almost 2:00 a.m., but there was no way I was ever going to catch him. Even if I'd wanted to whack him with the lacrosse stick, he was so fast that I'm sure I would have missed every time. 3)They can make themselves skinny when necessary. Just when you think they have nowhere to go, they squeeze themselves into some tiny hiding place just out of reach.

My first priority was to get the squirrel out of my room so that I could eventually get to sleep. After many unsuccessul attempts to corral him into a hat box (how I thought this would work, I'll never know), I finally scared him towards the doorway and he scurried out of my room and into one of the other empty bedrooms. I shut the door so that I would at least have him cornered in that room, and spent a goodly amount of time in there trying to draw him out of various hiding places, with the lacrosse stick in one hand and a laundry basket in the other. My great plan was to throw the basket over him and keep him prisoner, and then later in the morning call Animal Control to come and take him away. But that little devil was just too quick for me. I had absolutely no control over this animal; in fact, the opposite was true: until I could figure out a way to get him out of my house, I was his hostage, and I wasn't going to sleep a wink all night. Finally, I decided to just trap him where he was hiding, in the heat register along the floor a couple of inches from the wall corner, by jamming one of my son's sweatshirts into the register. Now he had the wall stopping him in one direction and the sweatshirt in the other. Then I wedged the overturned laundry basket on top of the register, and threw another sweatshirt on top of that to weigh it down. When I finally closed the door behind me and went to my room, I felt fairly certain that there was no way that little squirrel was going to be able to extricate himself from the prison I'd created for him...but I've been up for about an hour already, and I'm afraid to go into that bedroom and look! In a little while, I'm going to make a call to Animal Control. I don't care if it's Columbus Day; somebody over there better be on duty! 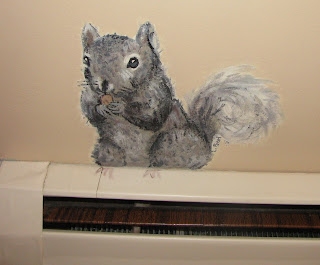 Here is something I painted on the wall of our downstairs bathroom not long after we moved into this house. That's right, it's a squirrel...painted to look as if it's perched on the heat register. (How ironic! And prophetic!)  He's cute, isn't he? Sure he is. I just love to paint animals on the walls in my house. I've painted dolphins, starfish, birds, pigs, a mouse...and this squirrel. You see, I love nature. I love animals. But after last night, I realize that I only love animals when they're out in nature, not in my house! After my traumatic run-in with that baby squirrel, I'm tempted to paint right over this little one-dimensional squirrel on the wall; it will only be a reminder to me of a night I'd rather forget.

Well, I don't know when they open, but I'm off to call Animal Control. Wish me luck!

(Note: I did turn the thermostat down to 60 before I went to sleep, even though it was a mild night--just to make sure the heat wouldn't turn on and cook my little friend. I thought I'd let you know this before you decided to call the SPCA on me.)
Posted by Laura Pearl at 6:30 AM

Email ThisBlogThis!Share to TwitterShare to FacebookShare to Pinterest
Labels: animals