Life is like this amazing, never-before-read novel, with so many unexpected plot twists.  And just when you get immersed in one particular chapter of it (I'm a wife!  I'm pregnant! I'm a mommy! My firstborn can walk! Welcome to the world, son #5!  I can't believe I have a teenager!  My youngest is a college graduate!  My boys are all married men!  I'm a grandmother!  I have 16--count them, 16!--grandchildren!), that one ends and a whole new one begins.

Here's the latest plot twist in the story of my beautiful and extraordinarily blessed life: my husband has retired from his long-held job as a commercial airline pilot.  His official retirement date was September 1.

Due to the decrease in air travel caused by the pandemic, his airline was forced to make drastic changes.  The company went from being on the cusp of hiring thousands of new pilots just before the Covid-19 crisis hit to having to let thousands of their currently employed pilots go--forget about hiring any new ones.

In order to give some of the less senior pilots a chance to avoid furlough, an early retirement option was offered.  At 62, my husband is three years shy of mandatory retirement age, but he decided to take the early out.  It's like a dream come true for him, really, being able to retire ahead of schedule and spend more time with our ever-expanding family.  And with me, of course!  (This surprising turn of events, this unplanned early retirement, would have to be filed under the title "unexpected pluses of the Covid-19 pandemic.")

In typical Pearl family fashion, my husband's retirement party last weekend was a simple one held here at our house, with our four oldest boys, who live near us in VA, and their wives and children. 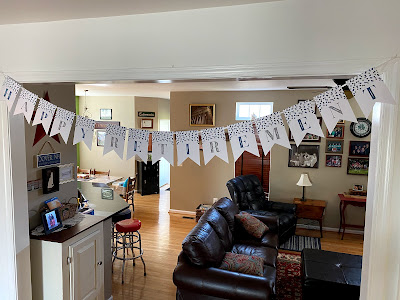 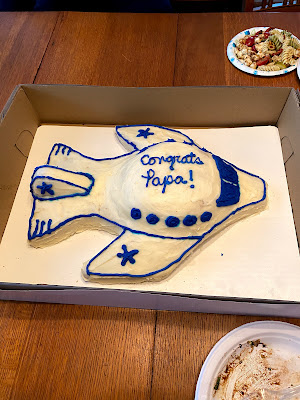 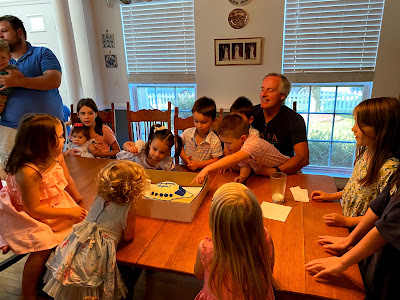 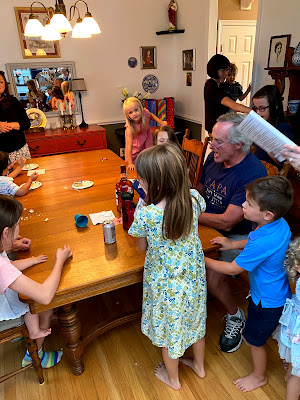 There were a lot of little people there to celebrate their Papa's retirement.  And there might have also been a tear-inducing video slide show set to music, put together by our second son and his wife, filled with so many beautiful images of a full and happy life that has been incredibly rich in blessings. [Sniff]

I am proud of the long and successful career my guy had with this major airline, where he was hired in early 1988 after serving eight years in the US Navy as a fighter pilot.  He spent his first few months as an engineer on the 727 before moving on to spend about a year-and-a-half as a copilot on the DC-9.  In late 1989, he began flying the 767, and he spent the bulk of his 32-year career on this aircraft.  He started flying the 767-ER internationally in 1996 and became a captain in 2006--an upgrade which he put off as long as possible during our boys' school years, because his seniority as a first officer allowed him more flexibility with his schedule (meaning more time for coaching his boys in football and lacrosse and more quality family time in general).  He thought he might finish out his career on the 767-ER, but in 2016 he transitioned and became a captain on the A330, which he continued flying internationally until his recent retirement.

With a husband flying internationally for 24 straight years, you might think that I saw much of the world right along with him.  Many pilots' wives tag along on their husbands' trips--especially the ones to popular European destinations--if there are seats available on the plane.  But I was not your typical airline pilot's wife.  Not by a long shot!

I didn't particularly care about traveling abroad (even though my husband got to visit pretty much every major city in Europe, Northern Africa, and the Middle East that a tourist would want to see), and I had a pretty intense fear of flying.  In fact, when he first got hired by the airline in 1988, I told him that I hoped he didn't think I was going to become a jet-setter, because I wanted to keep my feet securely planted on terra firma, and I wasn't going to leave my babies (we had four boys at the time) to go off galivanting around the globe.  He knew this about me from the get-go, and it never bothered him that I didn't want to travel.  In fact, after he'd been working for the airline for a while he admitted that it was a bit of a relief that I wasn't always saying "take me somewhere!" every time he got back home from a trip, tired and looking forward to a homecooked meal and sleeping in his own bed.  The last place he wanted to be when he wasn't working was in an airport, trying to get stand-by seats on a flight.  In fact, all the traveling he did over the years made him more of a homebody than ever.

We did take a few special family trips by plane: to Bermuda, to visit my husband's brother's family; to Disney World--our one and only trip to the Magic Kingdom; to South Bend, so that our three oldest could attend a lacrosse camp at Notre Dame.  My husband took one or two of his sons at a time out to Notre Dame for football weekends, while I held down the fort with the others.  And when our boys were out at Notre Dame during their college years, they were able to fly back and forth between New Hampshire and Indiana as non-revenue stand-bys, and that was a financial blessing indeed during their college years.  But generally, we didn't do a whole lot of travel by air, opting instead for road trips to visit relatives.  However, I used to tell my husband all the time that although I couldn't fly off with him AWAY from my babies, I felt sure that if they grew up and flew far away from our nest, I would be able to overcome my fears and fly TO them.  I pretty much promised him that it would be so.

Do you think I was able to keep that promise?  Did I conquer my fear of flying?

Yes, I did.  (Mostly!)
And remember what I said about chapters, about how they end and brand new ones begin?  In December of 2011, with our youngest son settled as a freshman undergrad at Notre Dame and our four older boys already college graduates and out on their own in the working world (the oldest married with twin daughters), I finally got on a plane that my husband was "driving" and accompanied him on a working trip to Nice (which included a little side trip to Monaco!). He'd been flying international trips for 15 years before I ever got around to tagging along on one; but the time was finally right. 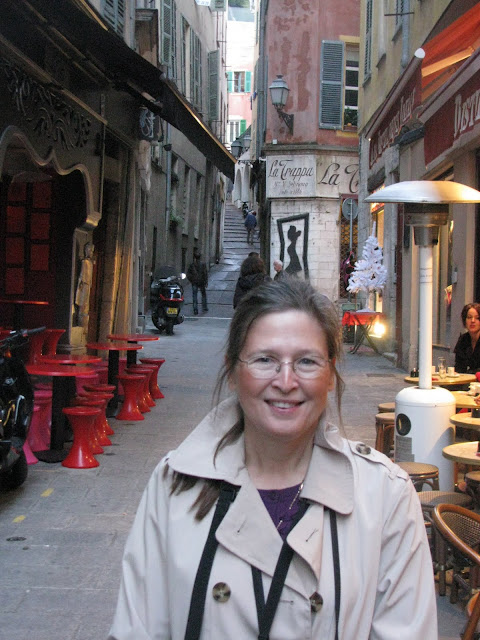 You know what?  I'm going to end here and pick back up next time with a brief re-cap of our Nice trip (about which I wrote a number of posts a LONG time ago, in my earliest blogging days--here, here, and here, for instance..and maybe now there's no need for a re-cap?).  And then after that, perhaps I'll reminisce about some other wonderful trips that I finally got around to taking with my husband--proudly sitting in my passenger seat, thinking, "That's right, everyone!  My husband is flying this plane!"

That chapter of his life is finished now; after spending his entire adult working life--40 years!--with a cockpit for an office, it is unlikely that my favorite pilot will ever fly a plane again.  That's bittersweet...but mostly sweet.

I was almost going to use this post to announce my own retirement, from this blog...but perhaps I'll stick around for a little bit after all.  I might have another chapter or two to write before I'm done.  Au revoir, mes amis!
Posted by Laura Pearl at 9:21 PM