More on Our Trip 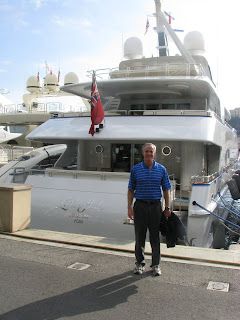 I'm still on a high this morning after my first trip to Europe with my husband. On the way back home, when we were on the JFK-to-Boston shuttle, my husband ran into another pilot he knows; and when this guy found out I'd gone to Nice, he said he thought that was the nicest of all their airline's European destinations. I've never been anywhere else, so I have nothing with which to compare it; but I do know that I loved Nice SO much. And I can attest to the fact that the area in which it is located--on the coast of southern France, right by the sea--is just indescribably beautiful. I am a huge fan of the Cote d'Azur, let me tell you. I would go there again (and I might, if the opportunity ever arises).

And if we ever get back to Monaco, my husband and I decided we might look into buying this sweet yacht called "Little Fish." It's bigger than our house. It's pretty nice, n'est pas? Maybe we'll buy two of them.

My flight home was just as fantastic as my flight over. Again, I was up in business class, getting the royal treatment the whole way. (It seems like maybe the flight attendants give special attention to the captain's wife when she's on board--and were they ever nice to me!) This time, when they offered all of us lucky folks up front a flute of champagne while we were still on the ground, I said, "Sure, why not?!" As I sipped my champagne, I gazed out the window at the amazing scenery--which was spectacular even when viewed from the runway at the airport--and was overcome with a feeling of sadness that our little mini-second honeymoon in Nice was coming to an end. But soon after take-off, fortunately, I was able to forget my tristesse and drown my sorrows in business class cuisine! For starters, the appetizer was a salmon and asparagus creation, and that was followed by a green salad. For my main course, I chose chicken with baked pumpkin (that was something new for me, and it was scrumptious). To top it all off, I had a chocolate tart, and when the flight attendant asked if I'd like to add some whipped cream and chocolate sauce to a dessert that was probably already about 600 calories, I again said, "Sure, why not?!"

After dinner, I reclined my seat and snuggled in for the duration, with two pillows this time (the seat beside me was empty, so I nabbed an extra one), and turned on my little T.V. to watch a lightweight romantic comedy called Monte Carlo. The main reason I wanted to watch it, of course, was because it was shot on location, and I wanted to be able to see things I've 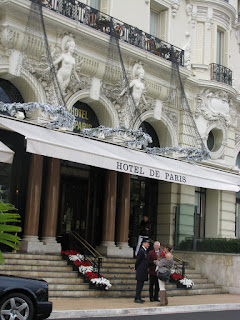 seen now with my own eyes and say "I've been there!" I can't tell you how many times my husband has said those words when we've watched films set in Europe! I dozed through most of this movie on the first run-through. But after about two hours of sleeping off and on, I was up for the rest of the flight, and watched not only Monte Carlo, but also Mr. Popper's Penguins (a Jim Carrey movie that won't win any Academy Awards, but was cute and amusing). In Monte Carlo, the three main characters stay at the Hotel de Paris, pictured here. And I saw this!

The flight home was about nine hours long--two hours longer than the flight over, because we were flying into a headwind--and after watching the two movies, I spent the rest of the time mostly reading. At one point, a flight attendant came around offering warmed chocolate-chocolate chip cookies, and I said, "I don't mind if I do!" About an hour and a half before landing, another light meal was served. This time, I had a cold Salade Nicoise, which was composed of shrimp, a hardboiled egg, thinly sliced potatoes, green beans, olives, and tomatoes, with a chocolate truffle candy for dessert...and then, as if the piece of candy wasn't enough, I accepted the offer of another warmed chocolate-chocolate chip cookie. I could really get used to eating like this! But now I have to go on a diet.

Anyway, I don't mean to go on and on, but this trip was such a once-in-a-lifetime experience for me. My joie de vivre is through the roof! I'm not finished talking about it yet...by the end of the week, I may have you all bored to tears. But before I lose you, take a look at these pictures from our Sunday in M 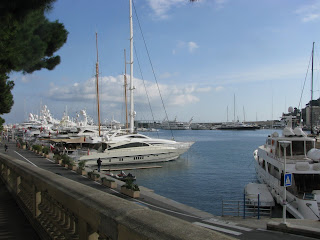 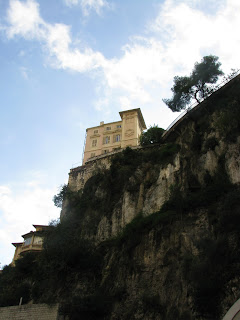 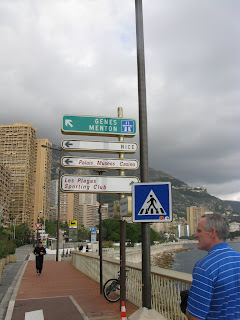 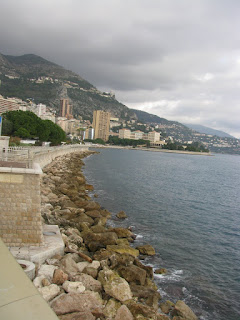 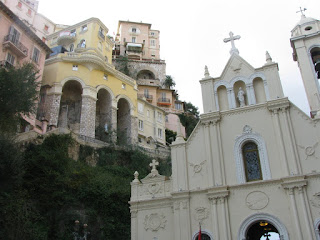 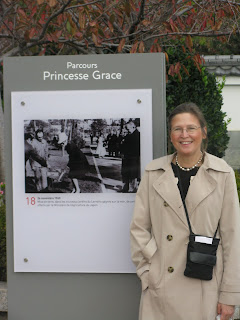