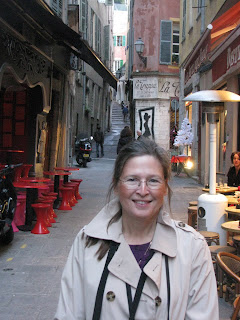 Okay, I was just showing off there, acting like I'm Miss Fluent and walking around Nice throwing out French words left and right. Just the opposite is true. I've been so shy about using even the simplest French mots that when someone says bonjour to me, I come back with a lame American "hi." I've been saying "thank you" when I want to say merci. My plan was to have all this fun trying to parle francaise--at the very least to use some basic French phrases--and I keep totally losing my nerve. My husband has been Monsieur francaise compared to me. So when we touristes go out and about again today, I'm determined to get over my shyness.

While I haven't been speaking the language, those French sentences above are true, at least when it comes to my husband and me: tourists like to walk; they admire all that they see; and they take many pictures. We spent about six hours walking all around Nice yesterday, and it was magnifique! We went all over the city and saw so many amazing things: beautiful churches, "old town," hundreds of quaint shops and restaurants (where people were sitting outside at little tables, dining al fresco in the unseasonably warm December temperatures), brasseries, boulangeries, boucheries (bistros, bakeries, butcher shops), cafes. We even saw an Irish pub, if you can believe it. Not to mention Subway and McDonald's. Don't worry, though; we did not get Big Macs for lunch. We stopped at a cafe and had drinks (cafe au lait for me, une biere for him). We shopped for beautiful scented soaps from Provence. We went over to the boardwalk by the Riviera. After hours of sightseeing, we had a nice dinner, sort of al fresco (tables were set up outside the restaurant, but there was a plastic enclosure around them to keep out the nighttime cold); we both enjoyed our poulet et frites (chicken and French fries), and then we headed back to our hotel with a bag of goodies we'd bought at a Monoprix grocery store. We sat out on our balcony, with Nice lit up all around us, and shared a bottle of wine, a baguette of French bread, and some fromage, jambon, and chocolats (cheese, ham, and I don't think I need to translate that last one, which is, of course, one of the most essential food items on earth). It was an absolutely perfect day. 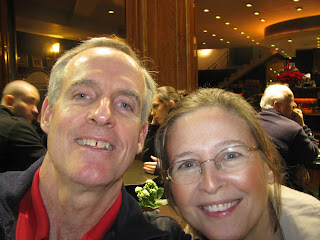 Here are some pictures from Day One in Nice. Note that at the boucheries here, the bacon they sell doesn't look anything like the kind we see in our American grocery stores. (Yikes!) Also, I was amused by the lady hanging her wet clothes out to dry, with people walking along the narrow cobblestone street right underneath her window! And the interior of the Catholic church we visited yesterday was so beautiful, it actually made me cry. It was dusky when I took the pictures of the Cote d'Azur, but hopefully I'll be able to get better ones today...in Monaco! 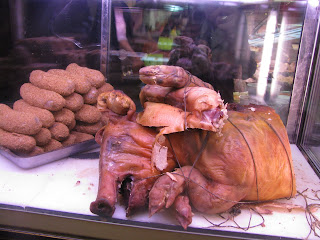 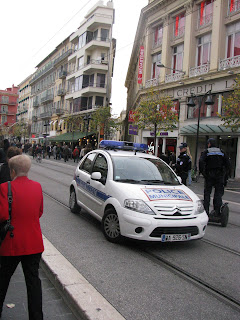 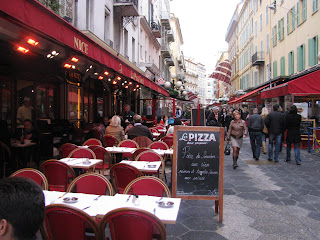 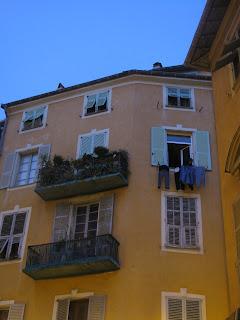 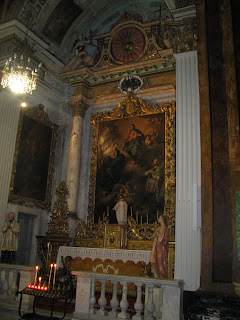 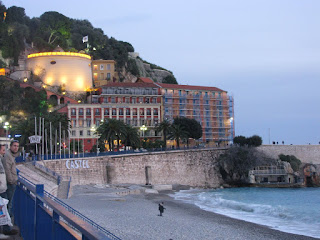 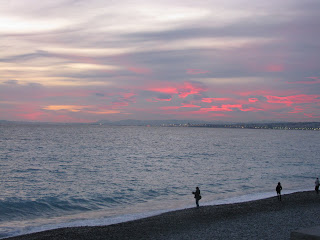 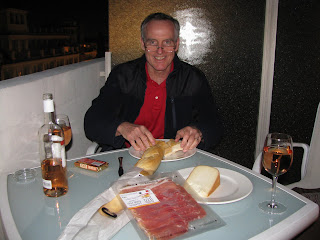