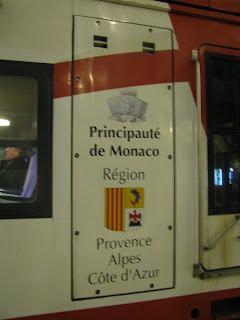 Yesterday, after going to 9:00 a.m. Mass at a church called Notre Dame (which is within spitting distance of our hotel in Nice), I had some cafe au lait and my husband had some chocolat chaud--and I must admit, sheepishly, that we got these at a nearby McDonald's--and then went back to our room and finished the half of a baguette that was left over from our little late night snack on the balcony last night. Afterwards, we walked over to the train station and took a 25-minute ride, along the magnificent Cote d'Azur...to MONACO! My husband has been an airline pilot for almost 24 years and has been flying internationally for 15; he has been to many European cities, and has probably been to Nice already about a dozen times. But when he was there the other times, he never went to Monaco. So even though my guy is a longtime world traveler and this is my first trip overseas, this is one place that we got to experience together for the very first time. When we strolled around Monte Carlo, it was as new and awe-inspiring to him as it was to me. I have always been fascinated by Grace Kelly/Princess Grace and have read a lot about her, so I was thrilled to be able to visit the little principality that she called home. And it was like something out of a storybook--too beautiful to be real--so it didn't disappoint. It was a very special day. 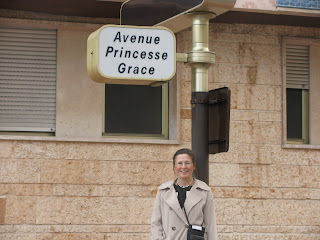 I can't possibly do our day in Monaco (and then last night in Nice, when we sat down by the beach--on the French Riviera!--sipping cold cans of Heineken and talking) justice in the time I have this morning. We need to get down to the lobby in a bit and meet up with the rest of my husband's crew. But when I get back home and have more time, I'll do another post or two about the trip and show you lots of pictures. Let me just say this, though: Monte Carlo is the most beautiful and exotic city. It's like something out of a dream, this beautiful city built up high on hills overlooking the Mediterranen. It's an awesome place to visit, but I think you have to be incredibly rich to live there. My husband and I saw yachts parked in the marina that were so enormous, they looked like they needed their own zip codes. We had drinks in a cafe in the square by the Monte Carlo Casino and the Hotel de Paris (two of the most ornate and incredible buildings I've ever seen!), and for one beer and one cafe au lait, we had to pay 19e before the tip. That made the prices we were paying for things in Nice seem like nothing! But I'm sure most of the beautiful people who typically frequent that cafe can afford it. I saw more women wearing furs in that square than I've ever seen in one place in my life.

Everything about yesterday--and the day before, too--has been idyllic. This trip came up all of a sudden, when another pilot wanted to swap trips with my husband. We didn't even have a chance to make any plans ahead of time, and yet we did so much and everything has been so wonderful. Even the weather has been amazing. It's December, and Nice and Monte Carlo have their Christmas markets all set up; but the sun has been shining and it's been warm enough over here to go about in a sweater or light coat (and my husband even spent part of the day yesterday in short sleeves, without any jacket at all). I could go on and on...and on. Let me just wrap this up by saying that this has been the most fantastic trip, and our dimanche en Monaco was a Sunday I'll never forget.
Posted by Laura Pearl at 1:44 AM