I have gotten two requests to continue showing old pictures of my boys' Halloween costumes--one from my firstborn son's wife (and the mother of my twin granddaughters), and the other from the girlfriend of son #3.  I can't possibly say no to those two darling girls, so I guess I'm on a roll here.  Don't even try to stop me!

As requested, here's another classic picture from a Halloween long, long ago (Halloween 1989, when my four oldest sons were 6, almost 5, 3 and 1/2, and almost 2--and son #5 wasn't even a twinkle in his parents' eyes yet): 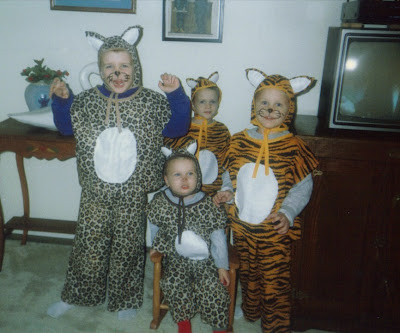 I know I've complained ad nauseam on this blog about how much I dislike cats...and these four little trick-or-treaters are wearing costumes that are most definitely feline in nature.  But there are two indisputable facts that contributed to my decision to dress them up as leopards and tigers that year:


1: Little boys LOVE lions and tigers and any species of wild cat that can roar loudly;
and
2: little kids look positively, irresistibly adorable in any sort of Halloween costume
that involves animal ears.

It appears that son #4 didn't let me put on his whiskers, although I did manage to paint a black smudge on his cute little nose...and son #3 apparently opted out of the face painting altogether.  But my little lads do look pretty adorable, don't they?  These outfits were homemade, but instead of purchasing patterns, I kind of winged it--so they aren't the most sophisticated costumes you ever saw.  But the pants and tops were nice and baggy and could be slipped over their regular warm clothes (which was good, because we were living in the blustery suburbs of Chicago at the time), and overall, I think they worked.

Such happy times...and so long ago!  (What really dates this photo is the TV set!  That was our fanciest TV back in the day, the one on which we watched Disney VHS movies as a family.  It looks so old-fashioned to me now, and so tiny...)

Stay tuned for another Halloween costume picture tomorrow!
Posted by Laura Pearl at 6:25 AM