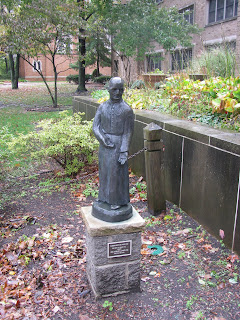 This statue stands right outside the front door of my youngest son's college dorm. It depicts St. Andre Bessette, C.S.C., a Congregation of the Holy Cross brother who was canonized by Pope Benedict the XVI in 2010. This humble and holy man spent almost 40 years as the porter (or doorman) at a Holy Cross boarding school called the College of Notre Dame in Montrael, and therefore he has been given the nickname "God's Doorkeeper." It is comforting to me to see this image of St. Andre every time I enter or leave my son's new home--and to know that he passes by it all the time as well. This saint spent so many years of his life greeting young men at the door of a school called Notre Dame, so it seems fitting that his image should stand at the door of a dormitory at a university with the same name.

Aside from answering the door, St. Andre spent much of his days receiving and consoling the poor and the sick. He had a special devotion to St. Joseph and presented many sick visitors with medals of the saint. He promised them that he would pray to God through St. Joseph's intercession. Many of those people with whom he prayed were healed, and before long he became known as a miracle worker. But he insisted, "I am nothing...only a tool in the hands of Providence, a lowly instrument at the service of St. Joseph." In the true fashion of a saint, along with being very humble he was also very simple and direct. "When praying," he said, "one speaks to God as one speaks to a friend."

It was St. Andre Bessette's hope that there would be a substantial shrine to St. Joseph located on Mount Royal above the city of Montrael. Construction on the beautiful church that would eventually become known as St. Joseph's Oratory began in 1914, and a smaller crypt church that could seat 1,000 was completed in 1917. But unfortunately, the grand towering basilica that St. Andre dreamed of took 50 years to complete, and he died in 1937 without seeing that completion. St. Andre is entombed now at the Oratory, which has become a world-famous pilgrimage destination that attracts more than 2 million visitors a year. It is the world's largest shrine dedicated to St. Joseph.

I have never visited St. Joseph's Oratory, but I hope to someday. My daughter-in-law and her parents took a trip to Montrael about a year ago and had planned to spend one day at the Oratory before seeing some other sights; but it was so awe-inspiring that they returned a second day. My daughter-in-law's father has a special devotion to this saint, and during the process of becoming an ordained deacon he was able to get a relic of St. Andre for his parish church.

There are so many wonderful and inspiring saints in the Catholic Church, and this former humble brother known as "God's Doorkeeper" is certainly one of them! I pray that he and St. Joseph will keep my son, and all the young men with whom he lives, healthy, happy, and safe.
Posted by Laura Pearl at 6:32 AM