It's a Beaut, Clark

Back when our boys were growing up in NH, it was our tradition for a number of years to go to a local Christmas tree farm to cut down our tree.  I loved how long those freshly cut trees would last (especially since we are definitely NOT those people who take down their tree by New Year's.  No judgment, you understand; it's just that we are not those people).  We always liked to keep our tree up at least until Epiphany.  And then we stretched it to the Baptism of Our Lord.

As time went on, we decided that maybe we would keep it up until our fourth son's birthday in late January...and then eventually, until Candlemas on February 2.

What can I say?  We love it when we have a Christmas tree in our house!  It's hard not to feel happy when you're looking at a decorated and lighted tree.  And eventually, we went with a fake tree so that we could enjoy it as long as we wanted and would never have to worry about it drying out on us while we were away from home, visiting with family in NY between Christmas and New Year's.  Also, the boys got old enough that they were too busy with school and sports for us to schedule a trip to the tree farm with everyone involved.  The year my husband and I found ourselves going there alone was the last year we had a real tree.

The artificial tree we had for many years in NH was a beauty.  We had the extra-high ceiling in the two-car attached garage that my husband converted into a giant sports-themed man cave/family room, so we were able to get one that was just shy of ten feet tall.  It had about 1,200 lights on it, a combination of color and white, and it was absolutely packed with ornaments, hundreds of them.  I loved that tree.  Each year, I added an ornament or two, some store-bought, some homemade, even though more ornaments was the last thing we needed. 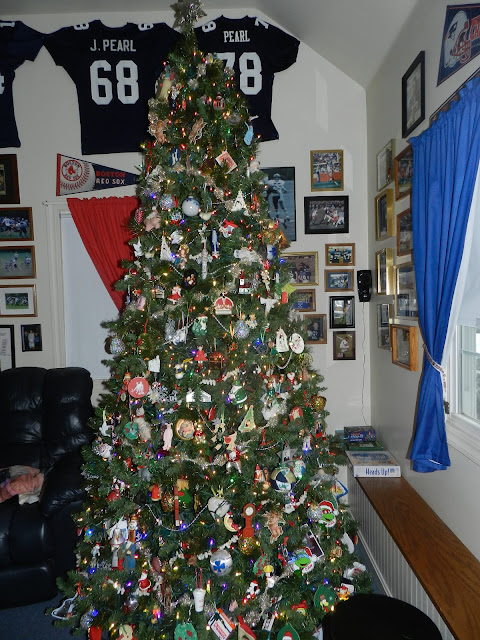 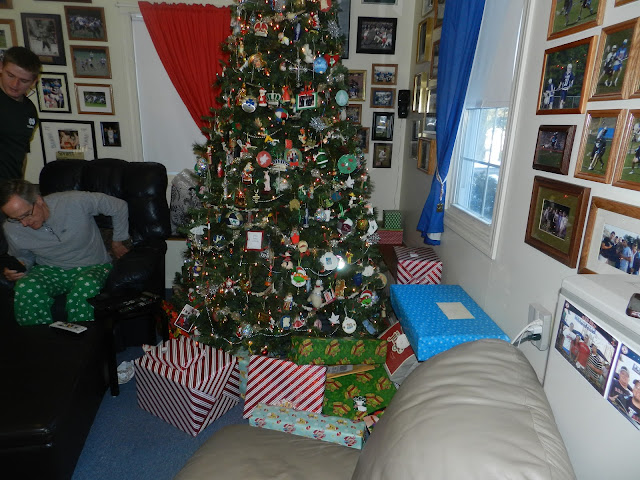 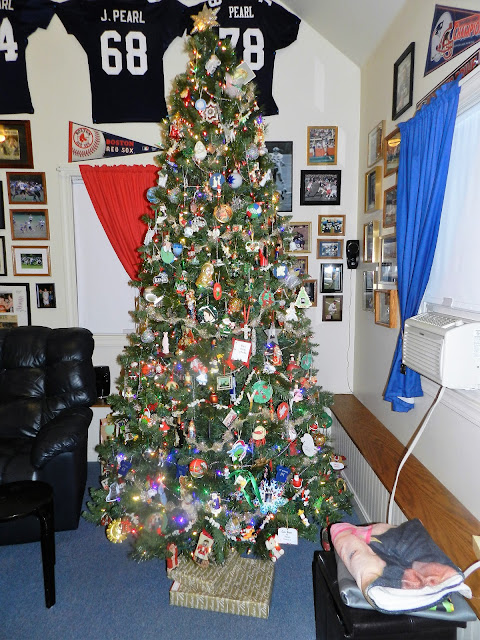 We celebrated our last Christmas in NH in 2016, and all five of our sons, along with the four daughters-in-law and seven grandchildren we had at the time, spent the holiday with us that year.  It was just wonderful. (Our youngest son also met—IRL—the girl he'd been corresponding with on Catholic Match at our house that Christmas; they've been married for over two years now so I'd say it worked out!) 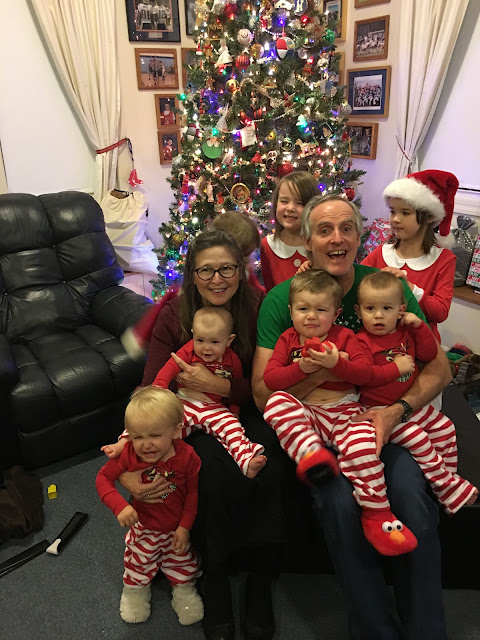 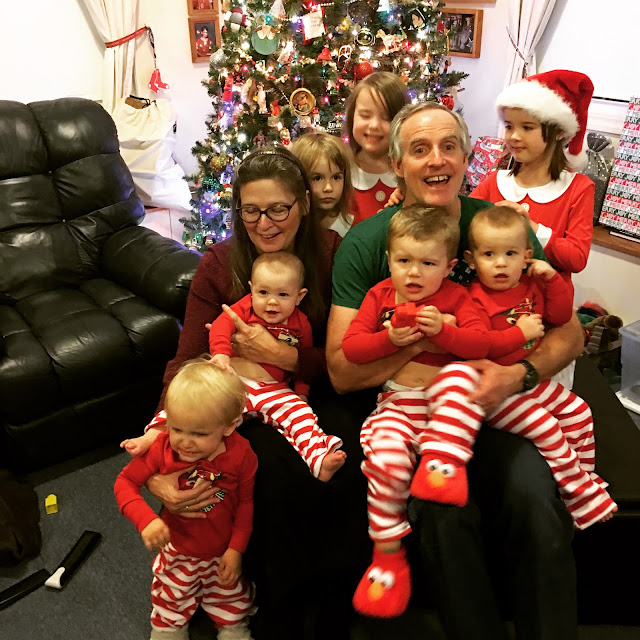 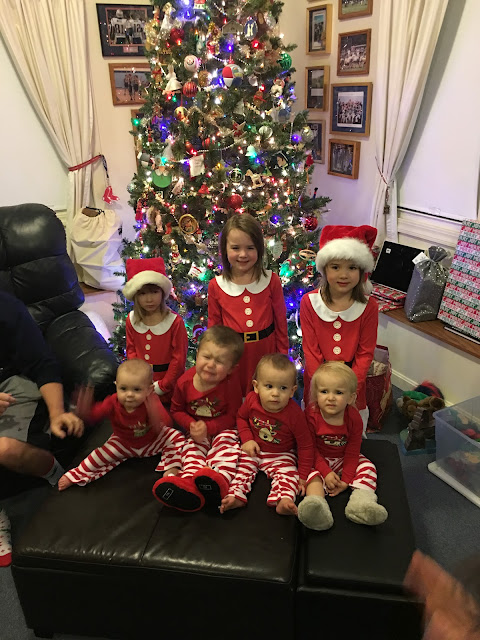 As you can see, it wasn't easy getting a picture of all the kiddos together—and that was ten grandchildren ago!

Shortly after those photos were taken, we were packing up a house that we'd lived in for 26 years to prepare for a big move south to VA, where our middle three boys (all but the “bookends”) had planted what appeared to be permanent roots.  By March of 2017, we were Virginians, and shortly after we got here, our oldest son switched careers and wound up moving close to us, too.  So now we had four of our five boys and all of our grandchildren near us.  It was too good to be true!

The one downside to the new house in VA was that there wasn't anywhere to display our enormous tree.  I was wondering if I would ever be satisfied with another one...but then we found a downsized tree that was absolutely perfect for us. (It's the official Griswold family tree, after all.) 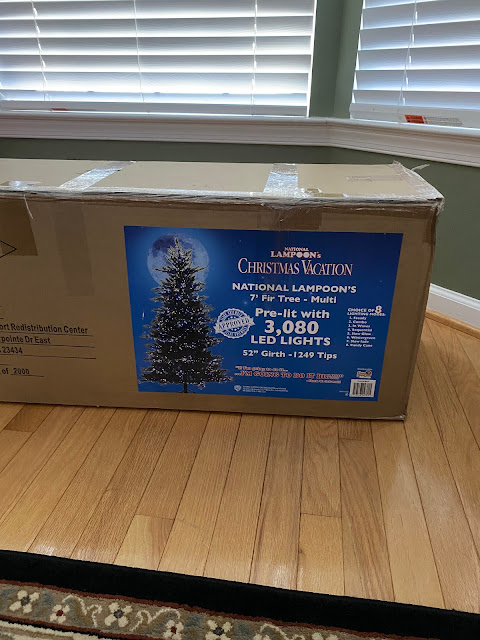 It fits nicely in the bay window of our cozy little living room.  For the past two years, I haven't put any ornaments on it, because there were too many curious (and sometimes destructive!) toddlers milling about.  But with all those lights (over 3,000!), it still looked pretty without anything on it but a garland and a star.

The triplets are four now, so we decided to decorate the tree again this year.  I've given boxes of ornaments away to each of our boys, but the branches are still sufficiently packed. 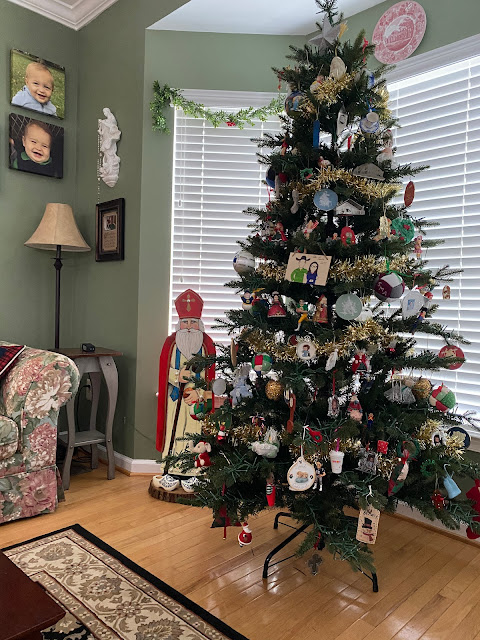 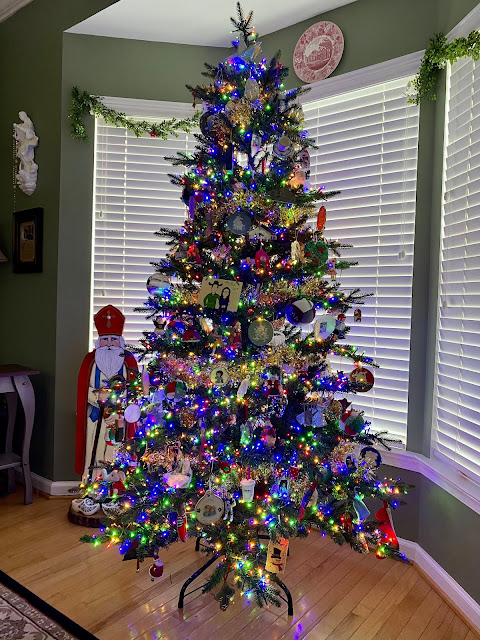 And when we moved here, we also got a smaller tree for a corner of our family room. 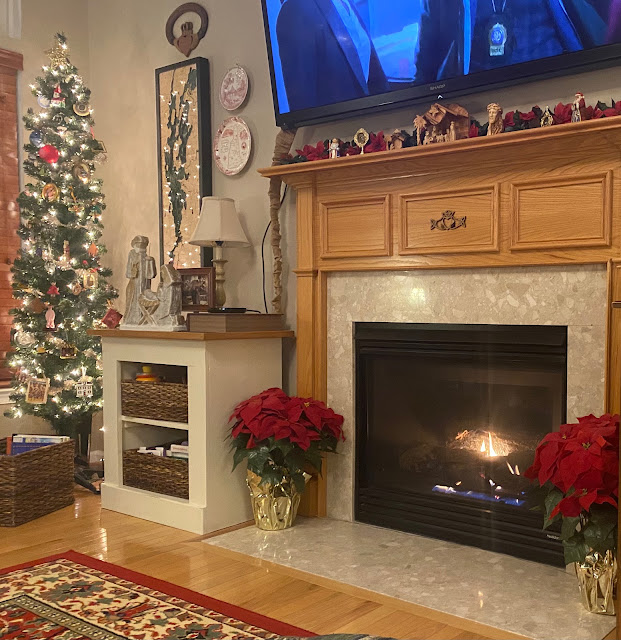 So we don't have our killer tree anymore; but I think we're doing just fine, don’t you agree?
A few days ago, we received a small package in the mail.  It was a gift from son #3’s in-laws: a tiny felt pennant with a Christmas Vacation quote on it. 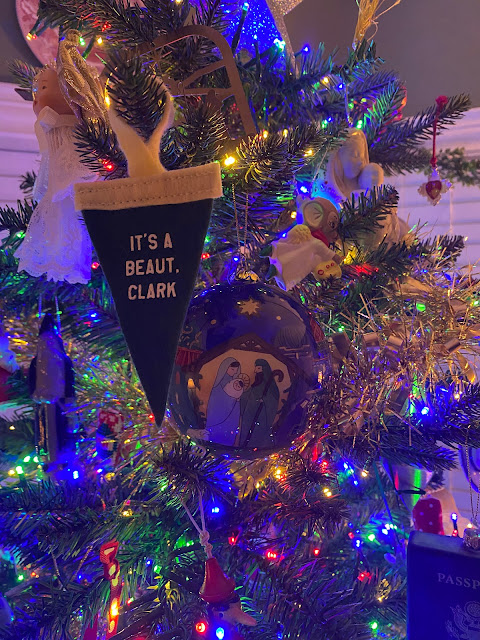 I'd say they've gotten to know us pretty well!
We are preparing to celebrate our fifth Christmas in the VA house, which is hard to believe.  The years in our new home state have positively flown by.  And now, with the imminent departure of son #1’s family (they are moving to a new home in the Midwest just after the holidays), we intend to cherish every moment we have with them—and with every member of our ever-growing Pearl clan.
Posted by Laura Pearl at 6:19 PM