A Homemade Christmas: St. Nicks for Everyone!

This year, my husband and I joined forces in Santa's workshop to create large wooden St. Nicholas figurines—five of them, one for each of our sons and their wives—for Christmas.  We had made one for us a few years ago and the kids said they'd like to have similar ones for their own houses.

Nothing could make me happier than having a project like this to work on!  I absolutely love making gifts; to me, it's so much more fun than shopping for them.

My favorite carpenter bought some pine boards, 1-inch thick and 10-inches wide.  I sketched the basic shape for him and he cut out five of them with his table saw and sanded them for me.

Then I set out to paint them. 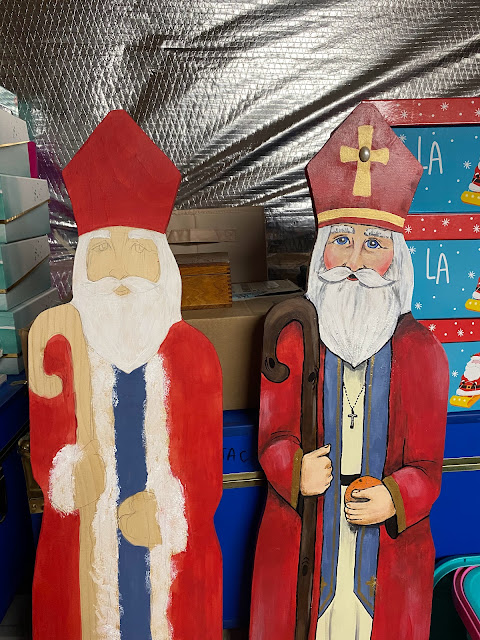 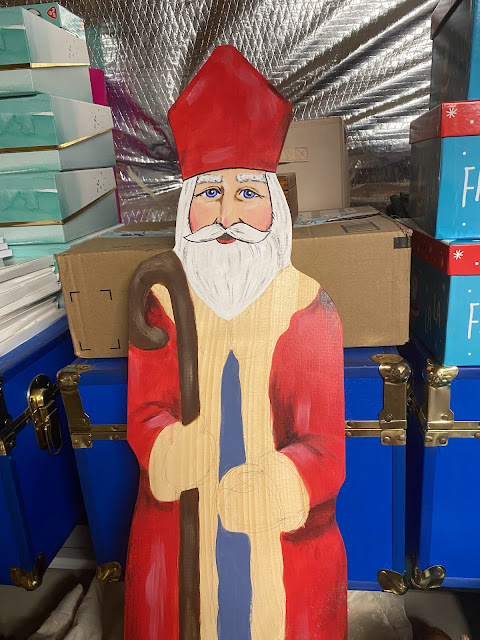 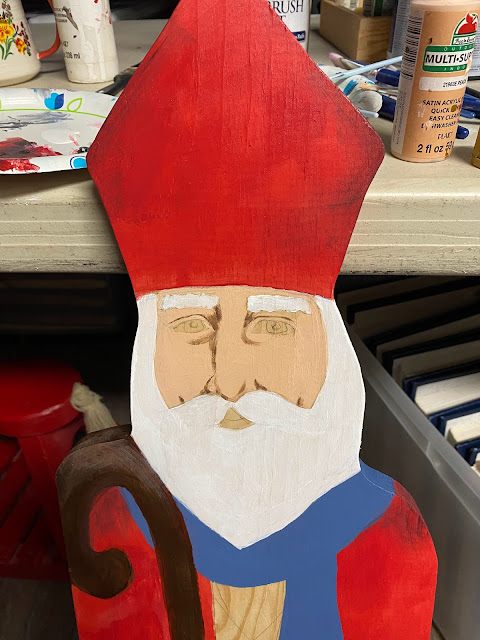 As I was working on them throughout November, I realized that totally by accident, the first two faces I finished sort of resembled two of our sons.  (I mean, not exactly; but sort of.) So then I set out to make each son's St. Nick look a little bit like he does.  I made the coats and other details slightly different, depending on each son's personality and interests, so that they would be five be one-of-a-kind St. Nicks. I also added pearl accents and glued a couple of coins on the bases (you know, because St. Nick is supposed to bring coins and leave them in the shoes).  I tried to find coins that were stamped with years—or in some cases, foreign countries—that are significant in our boys' lives. 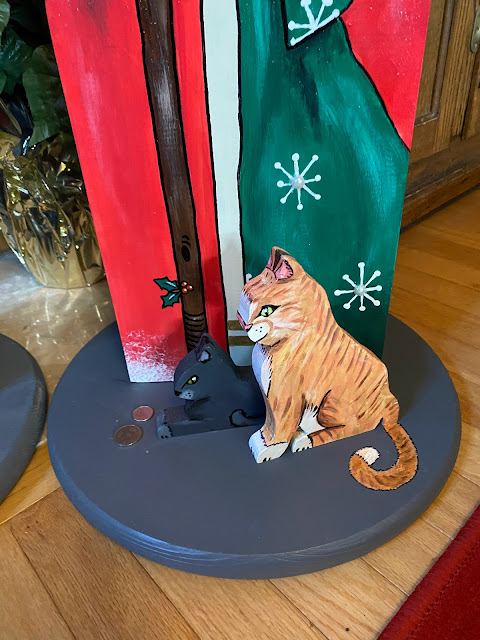 My hubby's carpenter skills were key; he is the one who got the St. Nicks securely screwed onto their bases, and then made triangular braces to go behind them, so that they would stand safely upright.  (So often, not just when he's woodworking, he reminds me of St. Joseph!)
By Thanksgiving, I was ALMOST done with this project, because I wanted to give son #5 his St. Nick while he was visiting us.  But he and his wife decided that since they're currently living in a small apartment, they will wait to take theirs home with them until they have a more permanent living situation and more room.
I finally finished them all up in time to give them out to the four oldest boys who live nearby during this last week of Advent.  Here they are, all lined up (in order, from oldest to youngest son, L to R): 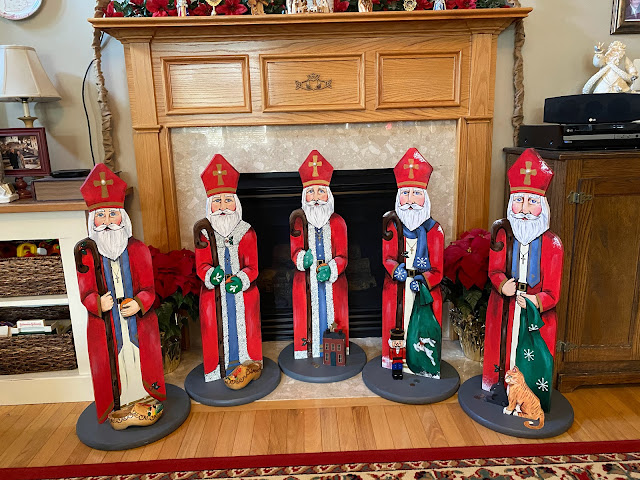 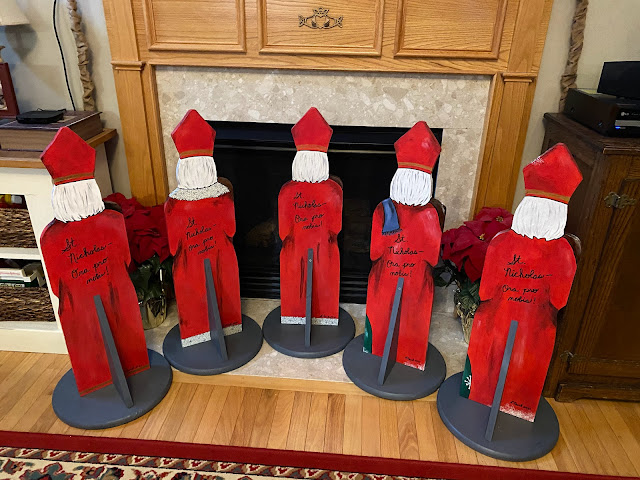 The ones we made for our kids are shorter and narrower than the one we made for ourselves, for two reasons: we forgot to measure ours before we went to Lowe's to buy the wood and didn't think the board we'd used was as wide as it was (12-inches); and actually, the wider boards were a good bit more expensive anyway.  Plus, I thought the new model, which is about three feet high, was a good size: big enough to make a statement, but not TOO big. 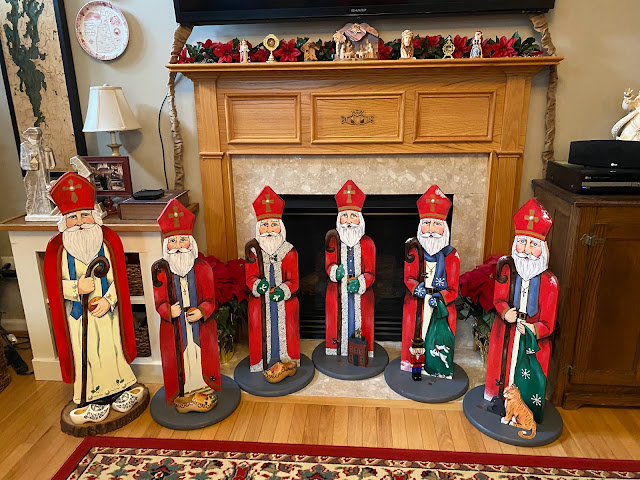 Okay, looking at that last photo makes me realize that ours is kind of huge.  Yikes, I hadn't really appreciated how big it was until we put it next to the others!  As one of our granddaughters said, it's like our St. Nick is the daddy and those are his five sons.  I love that.  That's how I'm going to think of ours from now on.

Our boys and their families appear to be pleased with these homemade Christmas gifts.  Here are son #2's four little guys giving their St. Nick some love. 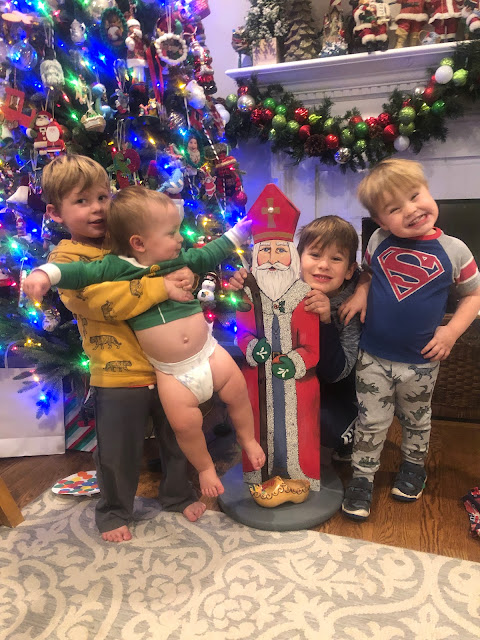 May we all have the pure and innocent joy of small children in our hearts this Christmas!  And St. Nicholas, pray for us!