Yesterday, the most awful thing happened.  My iPhone, which I had inexplicably decided to put in my back pocket (something I really never do) fell out of said pocket and...um...without giving you any more details than is absolutely necessary...it took a swan dive into the water and for a couple of seconds it was completely submerged.

I rescued it as quickly as I could, but I'm sure it wasn't quickly enough.  I dried off my precious (and expensive!) iPhone and instantly ran upstairs to ask my daughter-in-law if she had any rice.  She did--she had a bag of nice and healthy brown rice--so I filled a bowl with it and submerged my cell phone in those moisture-absorbing grains, hoping past hope that the near-drowning which had occurred would not result in any post-traumatic electronic stress for my poor baby.  So far, whenever I've turned it on to see if all the functions are working, it appears to be unharmed.  But our youngest son got his iPhone wet awhile back, and it took several weeks for the damage that had been done to render it useless and in need of replacement.  But still, I hope for a rice-induced miracle.

I fear that such hopes are in vain, however, and that I have killed my trusty, multi-tasking companion, the gadget which has been pretty much at my side since Christmas 2012--when, despite my protestations that it was the LAST thing in the world I needed, I received it as a gift from my husband.  Oh, how naive I was!  Anyone who has ever had a cell phone, and especially a smart phone, knows just how dependent upon them their owners become, try as they might to ignore them.  They are hard to ignore, it must be admitted.  And even I (who was determined never to even OWN one, much less get attached to it) can see how that can be a problem if you're not careful. 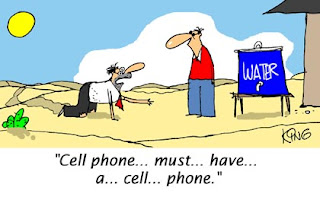 It's funny that this happened to me yesterday, making me think hard about what a cell phone-free life (horrors!) is going to be like for me until I can get my ruined iPhone replaced; and then I went on one of the blogs I follow and--lo and behold!--today's topic involved the way people rudely ignore each other at the table (even on dates!) because they are fiddling with their iPhones.  It's a very interesting, thought-provoking, and well-written piece, so I thought I'd give you a link to it here if you want to check it out.