A City Filled with Bikes and Boats

Amsterdam is a very interesting city, full of cobblestone streets and lovely old buildings with--what appears to be the norm in Europe, from my limited experience--absolutely stunning architectural details. It was not like anything I'd seen before. The houses along the canals are tall and narrow, attached to one another the way the brownstones are in NYC and Boston. What's unique about them, though, is that their facades actually lean forward a bit, and they have big hooks located at the top near their gabled roofs. These hooks, with the help of ropes and pulleys, are for hoisting furniture and other heavy items into the homes. Because the buildings are so tall and narrow, so are their staircases, and without the hoisting hooks it would be impossible to move things in or out. 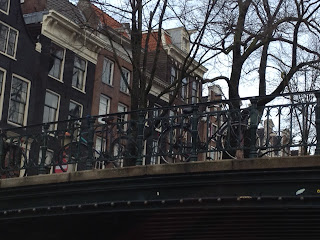 Bikes are obviously a major mode of transportation in Amsterdam. Everywhere we went, we saw bikes, bikes, and more bikes. At the beginning of the canal tour we took on Saturday, while we were still out in the large harbor, the tour guide pointed out a mulit-level parking gargage near the water's edge. It had space to hold about 2,000 vehicles; but it wasn't for cars--it was for bicycles! And it was pretty full, too.

Not surprisingly, as the city is built on water (its landscape is composed of dams, dikes, bridges, and canals), there are also lots and lots of boats, including houseboats that are moored along the canals like cars parked up to the curb. 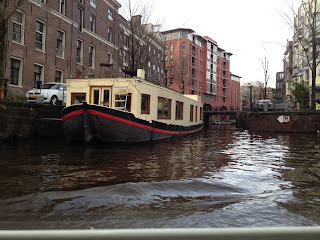 I never gave much thought to Amsterdam before our recent trip; and although my husband had been there numerous times for work, I never cared one way or the other about seeing it (just like I never cared about seeing Nice, silly me!). Although I would have lived a perfectly full and happy life had I never visited this beautiful and historical Dutch city, I'm so glad that I had the opportunity to do so. I truly did enjoy my short stay in Amsterdam, a city filled with bikes and boats.
Posted by Laura Pearl at 7:18 AM