In July of 2012, when I had approved the final galley of Finding Grace and it was about to go to print, my publisher (Cheryl Dickow of Bezalel Books) said I should relax for a little bit and try to recharge my batteries.  The work that comes after publication, she warned me, is much harder than the work that comes beforehand.  I couldn't help but wonder, How could that be?  I had just completed four and a half years of writing and rewriting, followed by another five months of fine-tuning the manuscript, creating the book's cover, and going through numerous publisher's galleys, until I was finally satisfied that my novel was ready for publication--so I had trouble believing that anything that happened after the book was published would be tougher than what I'd gone through to get to that point.

It's obvious that Cheryl, an author in her own right and a well-known and respected woman in the world of Catholic writing and publishing, knows a lot more about having a book published than I do, because I'm here to tell you that she was absolutely right.

The process of marketing one's own work is not for the shy or faint of heart--both qualities that might describe the gal who wrote Finding Grace--and self-promotion is exceedingly painful for someone as private, reserved, and happy-when-she's-not-the-center-of-attention as I am.  I mean, my natural tendency is to apologize for the book up front to a potential buyer, "I don't know if you're going to like it.  Maybe you shouldn't spend the money..."  A salesman I am NOT.  But when you have a book published by a small publishing house, the lion's share of the work involved in publicizing it--in selling it--falls on the shoulders of the author.

At first, I was so amazed to see my humble little title on Amazon that I thought to myself, Mission accomplished!  The book is out there, on-line for all to see, without any work on my part.  I was happy enough with that Amazon listing for about the first month after my book was released.  But Amazon carries millions of titles, and it takes more than having your book on that mega-site to achieve success with it.  If no one knows about your book, no one is going to go on Amazon and miraculously "stumble upon" it.  So eventually, I had to leave my comfort zone and take the steps necessary to promote my own book.

I began to do Google searches in order to find websites that showcased Catholic fiction, as well as Catholic book reviewers who might be willing to read my book and publish their reviews.  In the process of doing this, I began some wonderful e-mail friendships with several Catholic authors and even did some book exchanges with them, where I sent them a copy of Finding Grace and received one of theirs in return.  My husband, who has enough faith in me for the two of us, also helped a lot.  He has been incredibly supportive throughout this whole endeavor (starting about 30 years ago, when he began his mantra of  "I believe in you, someday you'll write that book of yours," simply because I told him it was a dream of mine to do so).  Noticing that some of the books on my publisher's website had earned the Catholic Writers Guild Seal of Approval, he encouraged me to apply  for that--so I owe it all to him that Finding Grace received the seal in late November of 2012.  Eventually, the guild will send out a sell sheet to about 500 bookstores and libraries, and that may turn out to be the most effective marketing tool I could ever ask for.

And speaking of libraries: My daughter-in-law (the librarian) told me that if you have a library card for your local public library, you can find a form on-line requesting that they purchase a book that they don't have.  She actually did this recently, and just found out today that the Pikes Peak Library out here in Colorado Springs has ordered a copy of Finding Grace and reserved it for her to check out as soon as they receive it.  Soooo....I hesitate to ask you this, dear readers, but if any of you out there are in possession of library cards and are willing to contact your local libraries to request that they purchase a copy of my book...well, I would be eternally grateful.  I know it takes a lot of chutzpah to ask you to do that, and chutzpah is not something I have in abundance (I'm blushing right now, by the way).  But the last time I checked, Finding Grace was ranked #859,093 in sales on Amazon (not exactly a Top Ten Bestseller, as you can see!), and if copies are going to get into the hands of the impressionable young readers I hope to reach with the book, I could use all the help I can get. 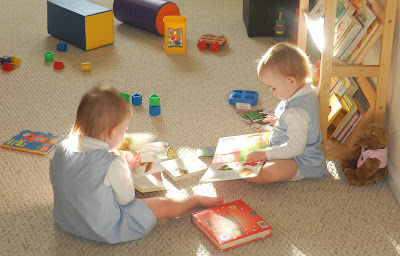 The inveterate bookworms pictured here are obviously much too young for Grammy's book right now...but it was the thought of all the future grandchildren I hoped to have, like these twin granddaughters who arrived when I was still working on it, that inspired me to write Finding Grace in the first place.  I have two copies set aside with their names on them, just waiting until they're the right age to handle the mature themes of the story.

But for all the teens and young adults out there who might enjoy and be edified by Finding Grace, it sure would be nice if they could find it at their local public library...(I'm blushing again.)
Posted by Laura Pearl at 4:21 PM