A Fond Farewell to the T.V. Show "Chuck"

For five years now, my husband and I have enjoyed the T.V. show "Chuck," which until this past season aired on NBC on Monday night at 8:00 (this season--it moved to Friday). For four of those years, we had our second and fifth sons living in the house with us, but they never really got into it, preferring to watch "House"--which was on at the same time on another channel-- instead. We always watched "House" with them, because we think watching favorite T.V. shows should be a social event and as much as possible a form of family bonding; but we always DVR'd "Chuck" so that the two of us could watch it later. If my husband was home the following day, we would settle in to watch it while we had our lunch; if he had to work that day, we would have a "'Chuck' lunch date" as soon as we could after he got back from his trip.

But on January 27, our beloved show aired its last episode, a two-hour finale. And it might sound kind of ridiculous, but I'm a bit sad! I can't believe that this funny, extremely entertaining show with its talented ensemble cast of endearing characters is going off the air after only five seasons, when so many shows that are complete garbage stay on for a decade and longer. In this day and age, when half of what's offered on the tube is so-called "reality" television that really could turn your brain to mush, "Chuck" was a sweet, intelligent, family-friendly program (funny, without resorting to the tireless barrage of double entendres and dirty jokes that most modern comedies rely upon to get laughs). 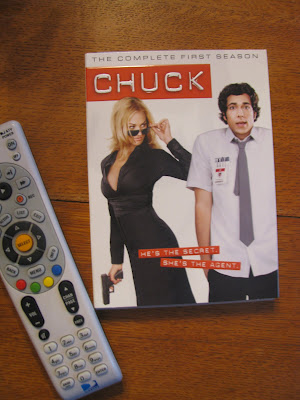 The show stars the eminently likable Zachary Levi as Chuck Bartowski, a mild-mannered, self-proclaimed computer "nerd," who works at Buy More (think Best Buy) and is part of the "Nerd Herd" (think "Geek Squad"). In the series opener, he receives an encrypted e-mail from an old college friend who's now working for the CIA, and the message subliminally embeds something called the "Intersect"--which contains all of our government's greatest spy secrets--into his brain. He has now become an invaluable "asset" to the CIA, because this database in his brain (which is activated by different triggers that cause him to "flash" and receive important information) can be used to thwart international terrorists and assassination attempts, to find and capture bad guys. When they realize Chuck is carrying around the Intersect, the CIA sends two agents, John Casey and Sarah Walker, to watch over him. To keep others from suspecting their true identities, Casey goes undercover by taking a job at the Buy More and Walker poses as Chuck's new girlfriend, and--here's the shocker--Chuck and Sarah eventually fall in love as the show goes on. Some of the comedy comes from watching Chuck try to continue interacting with his family, friends, and co-workers as the lovable computer whiz next door, while living a secret double life and going on dangerous spy missions with Casey and Walker. It might sound like a silly show--and I admit, the premise is kind of goofy--but it's been so much fun to watch.

[Sigh...] My husband and I have so few shows that we really look forward to watching together; now we have one less.

A couple of Christmases ago, one of our sons got us the DVD set of the first season of "Chuck." Now that it's off the air, I think we'll have to break it out and watch the series again from the beginning. I foresee lots of lunch dates watching old "Chuck" episodes. (And hint, hint, guys: seasons two through five would make excellent gifts in the future!)

In the meantime, I'd like to wish a fond farewell to "Chuck," a show that, in my opinion, was axed long before its time.
Posted by Laura Pearl at 8:57 AM