About This Global Warming... 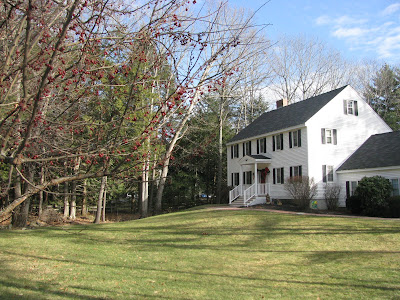 I took this picture just a couple of days ago. This is what it looked like in front of our house on January 10, proving that miracles really do happen--because miraculously, there wasn't a speck of snow in sight. We had a freakish October Nor'easter here that dumped a few feet of snow on us and gave us a white Halloween. But so far, despite the fact that we're almost halfway through the month of January, we haven't had another snowstorm.

Yup, we had a green Christmas here in New England (aside from a Christmas night dusting of snow--and really, that was just a couple of flakes), and the temperatures during January have been hovering mostly in the high 30's and low 40's. We've even had some days that felt like spring--sunshine and high 50's--and I was starting to get used to the idea of a Southern-style winter. One without six-foot-tall mountains of snow on either side of our driveway. One without brutally cold winds that sting your cheeks. One without--well, you get my drift. I've always liked living in a part of the country where you can experience all of the seasons, but sometimes the winters up here are so long and cold and depressing, you feel like you're going to go crazy if you see even one more snowflake fall out of the sky--so I've been more than okay with the unseasonably warm winter we've been having up until this point. Yes, I admit it: I just love that global warming! (I made a vow to myself at the outset that I wouldn't get political or controversial in this blog, so I won't tell you how I really feel about all the hysteria over global warming.)

But wait a minute: in spite of the inevitable and inexorable warming of our beloved globe, I awoke this morning to find that it's all blizzardy outside. It's snowing hard and--oh, goody!--later, we're supposed to get some sleet and freezing rain mixed in there, too, before it all turns to rain. I knew the weather we've been enjoying so far was too good to be true! I knew I couldn't depend on that finicky, fickle global warming business to keep Old Man Winter out of the Northeast this year.

So about this global warming...what exactly is the deal? You know, I'm beginning to understand why the new PC term for this scientific theory is "climate change." But, hey, about this climate change...how come when I look out my window on this mid-January day, the climate looks about the same as it always does this time of year?
Posted by Laura Pearl at 7:25 AM