What's Wrong with This Picture?

Today is the anniversary of the devastating Japanese attack on Pearl Harbor in 1941, when we remember and pray for all of the souls who lost their lives that fateful day while serving this great country of ours. Normally I would do a post dedictated entirely to that event, and perhaps I should.

I can't seem to stop talking about my trip, though. Did you know I just came back from a trip to Nice? Have I told you that yet? Well, I did! And it was the most amazing experience! Before this trip, the only places I'd ever been outside the borders of the U.S. were Cancun (where we went for our honeymoon in the summer of 1982, about a year and a half after we got married), Bermuda (which we visited in 1991 with our four oldest boys, when my husband's brother and his family were stationed there at the Naval base), and Canada (which is so close to where I grew up that it never really seemed like a foreign country). Even though my husband's job has been taking him to cities all over Europe for the past fifteen years, I had never been across the Atlantic Ocean before I accompanied him on this awesome four-day trip to the Cote d'Azur. I can't stop thinking about all of the beautiful scenery I saw and how different things are over there than they are here.

Although, there was one hauntingly familiar, uber-American (and completely incongruous!) thing that kept popping up during my European holiday. Look closely, and see if you can find what's wrong with this picture taken on the streets of Nice: 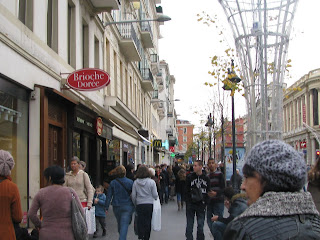 Now see if you can find it here, in Monaco--that idyllic little thoroughly European principality: 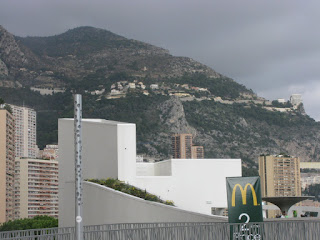 What is the deal with the golden arches popping up all over southern France?!

Okay, now I better come clean: I did order a coffee at a McDonald's in Nice on Sunday morning. I doubt Grace Kelly ever did that. But before you judge me, let me explain that it was a cafe au lait and tasted nothing like any coffee you would get in a Mickey D's over here. And I promise you, after that one slip I immersed myself in local culture and got my caffeine fixes strictly from little French establishments.
Posted by Laura Pearl at 6:58 AM