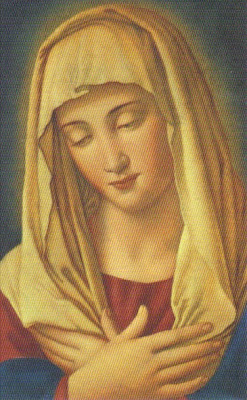 When the Archangel Gabriel appeared to Mary to tell Her that She had been chosen to become the Mother of God, She could have said no; but She didn't. Her response was: "Behold, I am the servant of the Lord. Let it be done to me according to your word." (Luke 1:38) This was Mary's yes; it is called Her fiat, which in Latin means "let it be done." As Robert Wenderski writes in "She Could Have Said No," an article in the May/June 2011 issue of Lay Witness, "...what if she politely declined, claiming unworthiness? The consequences are imponderable--all what we now call salvation history vanishes."

Mary's role in mankind's redemption is key. As Wenderski says, "God could have chosen any number of ways to redeem fallen humanity. He chose the best way. God wanted to become one of us, to assume human nature, so as to possess a human intellect and a human will. He desired to take a human body and be 'born of a woman.'"

Some non-Catholics cannot understand why Catholics venerate and pray to Our Blessed Mother. They believe that devotion to Mary takes away from devotion to Jesus; but nothing could be further from the truth. The two of them, Mother and Son, are inextricably intertwined. She is a Mediatrix; because Her Son loves His Mother, He will do what She asks, if it is for the good of our souls. (Remember, Jesus' first public miracle--the changing of the water into wine at the wedding feast at Cana--was performed at the request of His Mother.) When we pray to Mary, we are entreating Her to intercede for us with Her Divine Son. As Wenderski puts it, "Our Lady mediates grace (that Jesus merited) through her prayer. So, our heavenly Mother does for us now what she did for her Son when she walked this earth. She does everything she can to aid us."

When Mary visited her cousin Elizabeth (where She stayed for three months until the birth of Her cousins's son, John the Baptist), Elizabeth cried, "Blest are you among women and blest is the fruit of your womb." (Luke 1:42) Mary's joyous response to her cousin's greeting, also found in Luke's gospel, is known as the "Canticle of Mary" or the "Magnificat." Here are the first five lines of this beautiful prayer:


My soul magnifies the Lord,
And My spirit rejoices in God my Savior.
For He has regarded the low estate of His handmaiden,
For behold, henceforth all generations shall call me blessed.
For He who is mighty has done great things for me, and holy is His name.


She was a humble virgin who became the Queen of Heaven. She is the loving Mother of all mankind. But without Mary's fiat, where would we be? Because Mary said yes, God's Son came into the world and Heaven was opened to humanity. Thank you, loving Intercessor and Mediatrix! Thank you, dear Mother! And Holy Mary, Mother of God, pray for us sinners, now, and at the hour of our death. Amen!
Posted by Laura Pearl at 7:07 AM