Hans and Gretchen: They're a Couple of Characters 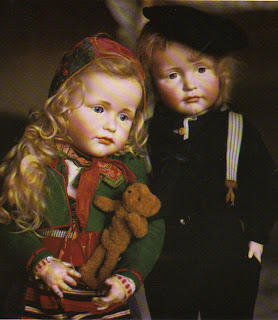 Okay, I need to start this off by apologizing to the menfolk in my family, because this is going to be a super-girly post about one of my favorite subjects: dolls. I know I put up a post about dolls not that long ago, "just the other day," as my mother is wont to say (May 14, "Thinking About Twins!"), so I should have gotten it out of my system with that one. But it wasn't enough, guys; it just wasn't enough. And I should get credit for my man-pleasing post about sports two days ago ("The Origins of Lacrosse"), shouldn't I? So I'm sorry, but you'll just have to bear with me on this one.

When I was taking doll classes years ago, I became very interested in antique German dolls known as "character dolls," which made their first appearance in 1908 at a doll exhibition in Munich. At the time they caused quite a stir, because they weren't like the "pretty" porcelain-headed dolls that had been produced in France and Germany during the 19th century. Those idealized doll faces, though beautiful, were more mask-like and stylized, with small mouths and enormous glass eyes; they all looked about the same, and were meant to illustrate the ultimate in feminine beauty. The dolls that shocked the world at the Munich exhibition presented human faces with more truth and realism. Their facial features more closely resembled those of real humans (warts and all, if you will). At first, these newfangled dolls were called "art dolls," but e 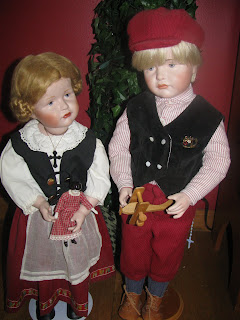 ventually they came to be known as "character dolls."

My dollmaking teacher had hundreds of molds for us to choose from, and she had many of the character doll molds. Real antique doll heads were used to create the molds from which reproductions can be made, which makes reproduction heads slightly larger than the originals. Even though a doll expert would be able to tell the difference between a copy and the real deal, when using an antique reproduction mold a modern dollmaker is required to carve her initials into the greenware of the doll's head before it is fired into porcelain; that way, she is unable to to try to pass off her doll as an original antique and sell it for much more than it is worth.

I have two favorites among the German character dolls: one is J. D. Kestner's "Hilda" (she can be seen modeling christening dresses in my April 7 post, "Making Christening Dresses, Part 2"); and the other is Kammer & Rhinehardt's "Hans/Gretchen" (using the same mold, the doll can be made as either a boy or a girl).

I have posted a picture of true antique versions of Hans and Gretchen, from a book called Rare Character Dolls by Maree Tarnowska. I have also posted a picture of the reproductions of Hans and Gretchen that I made in my doll class (the pair of blonds dressed in red and black). I tried to dress my little sweeties in antique fashion; some of the fabrics used to make Gretchen's dress are indeed vintage, as are her genuine leather shoes. Her wig is made of mohair, which is what the old dolls had, rather than synthetic fibers. I think my little doll couple looks very sweet, and I love them both; but I also think there's nothing like the real thing. There's just something about truly old dolls, ones that have been around for 100 years or more and have been passed down from generation to generation, that can't be duplicated. But since authentic antique dolls are prohibitively expensive (at least for this doll enthusiast), making reproductions is a great way to enjoy the beauty of such dolls without the cost.
Posted by Laura Pearl at 8:08 AM

Email ThisBlogThis!Share to TwitterShare to FacebookShare to Pinterest
Labels: dolls