God Has a Plan 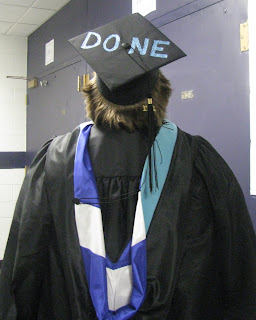 This is a picture of my second son, who received his Master's Degree in the Art of Teaching (Secondary Math Education) over the weekend. Much to his chagrin, he was persuaded--you might say forced--by some female friends, teaching interns with whom he worked throughout this school year and to whom he became quite close, to adorn the top of his cap with fabric paint. They knew he'd never buy the paint himself, so they bought it for him. And as if using any product with the word "fabric" in it wasn't bad enough, this paint had glitter in it, which my son saw as an affront to his very manhood. But he's a good friend and a good sport, and so in order to play nice and make the girls happy, he decorated his cap, choosing a sentiment that's short and sweet and to the point: DONE. After lots of hard work, which earned him summa cum laude honors on his undergraduate degree last year, he's finally done; he's ready now to move on to the next phase of his life and begin his career as a high school teacher and coach.

My son, like so many young people, had to take a few detours in the road to find out what he really wanted to do with his life. He went right from high school to his dream college 17 hours away in the Midwest; but two-plus years and a couple of changes in major later, he realized that he needed to take some time off, regroup, and figure out what he was truly interested in studying. He came home and worked for two years as a teacher's aide in a class of autistic students at our local middle school, and he also became an assistant coach for the football and lacrosse teams at his old high school. It was during this two-year stretch that he began to realize that he wanted to be a teacher; and although he enjoyed his work in the middle school, he also realized that he was meant to work at the high school level.

God does indeed have a plan for everyone, and this son's journey to his Master's Degree is a perfect example. My son never dreamed he'd earn his degree from the state university that's close to where we live; but he did, and he had a fantastic experience there. He also never gave the idea of teaching so much as a thought when he was younger; but now, he realizes that it's the only job he can imagine having. Not only is it something he enjoys, but teaching is the vocation that best utilizes his God-given talents and abilities--it's where he can put those natural gifts to good use and hopefully make a difference in the world.

When this son first returned home, my husband and I sometimes worried that if too much time went by, he might not want to get back up on the horse and finish his degree. We had to learn to trust that God knew what He was doing and was watching out for our boy. And He was. Just look at the outcome: now, this future teacher is the most highly educated person in our family, the only one out of the five brothers and their parents with an advanced degree of any kind! He used to joke, at his own expense, that he was on the "seven-year plan" for finishing college. But you know, it doesn't matter how long it takes. Some things are worth the wait, and this is definitely one of them. My husband and I have no doubt that each and every event that led our son to take the path he took was part of God's grand plan for him. He left a far-away university he'd always wanted to attend and ended up at a school to which he'd once sworn he'd never go; yet it was at this university near home that his true destiny was fulfilled.

Deo gratias!
Posted by Laura Pearl at 6:24 AM