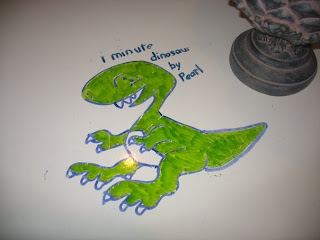 If I had a dime for every time some other young mommy said, after finding out that I had five boys (which, unbeknownst to me, was apparently some kind of curse), "Oh, God bless you!" or "You poor thing, no girls?", I would be a rich woman today. I think some people imagined that our home was a scene of constant fistfights and wrestling matches--of scruffy little hooligans swinging from chandeliers, or something along those lines. Oh sure, my boys could get crazy at times; they roughhoused, they bickered, and they made almost every activity a competition. Let's put it this way: we didn't have a lot of tea parties going on around here. But my boys could also spend hours at a time engaged in peaceful, quiet activities like looking at books and building intricate worlds for their Matchbox cars and toy dinosaurs out of colored wooden blocks. And drawing. Endlessly, determinedly, contentedly drawing. You've never seen so many drawings in your life!

All five of my sons were quite talented artists. There, I've said it. I've bragged shamelessly. But it's true! They all drew constantly when they were little guys, going through reams and reams of paper. If they had sharpened pencils and stacks of cheap white paper at their disposal, they were in Heaven. They would sometimes color in coloring books; but they preferred making their own pictures, and the ones they made themselves were almost always done in simple black and white. I didn't save every masterpiece, but I picked some samples from each of my boys and put them in binders for posterity. Seriously, if I'd saved everything they ever drew, I would need to rent one of those metal storage units to fit it all.

My boys liked to draw snakes, alligators, sharks, tigers, elephants, rhinos, and Teenage Mutant Ninja Turtles; but above all, they liked (and were incredibly good at) drawing dinosaurs. I would say that my sons' fascination with these pre-historic beasts--especially the king of them all, Tyrannosaurus Rex--bordered on an obsession. One of these weeks, I'm going to post a T-Rex drawing a day, Monday through Friday, starting with one by the oldest and ending with one by my baby. It'll be "T-Rex Week": you know, like Discovery Channel's "Shark Week."

For today, however, I decided to post my middle son's cartoonish "One-Minute Dinosaur"; it's his trademark, which he perfected years ago. He can--and does--still whip this dino out in no time. This particular son is not really into doing artwork anymore; actually, out of the five of them, only sons #2 and #4 still have a passion for drawing as adults. But I think this T-Rex by son #3 is pretty darn cute.

Stay tuned for "T-Rex Week," though; I think you'll be impressed!
Posted by Laura Pearl at 7:06 AM