So, I'm still working on getting all of our July memories recorded, because better late than never and all that good stuff.  I recently blogged about a nephew's wedding and a grandson's Baptism.   Now it's time to tackle the Fourth of July!  It was indeed a day of glorious family-centered celebrations.

All of our gang who were able to be there (our four youngest sons, their wives, and 13 of our grandchildren) moved into our Oyster Haven house on the 3rd, the day after the wedding.  On the 4th, we all headed a few miles down the road to my husband's childhood neighborhood, where every year they put on a giant parade, complete with a decorated fire engine bringing up the rear.  All the kids (and let's be honest, most of the grown-ups, too) dress up in red, white, and blue, and they have their bikes and strollers adorned with Stars and Stripes.  Spectators set their chairs up near the curbs in front of their houses and sit with beers or sodas in hand, catching up with neighbors as they march by.  Our grandkids really enjoyed taking part in this longstanding neighborhood tradition, one that their dads remember from their own childhood days when they were visiting their Papa and Grandma during summer vacations. 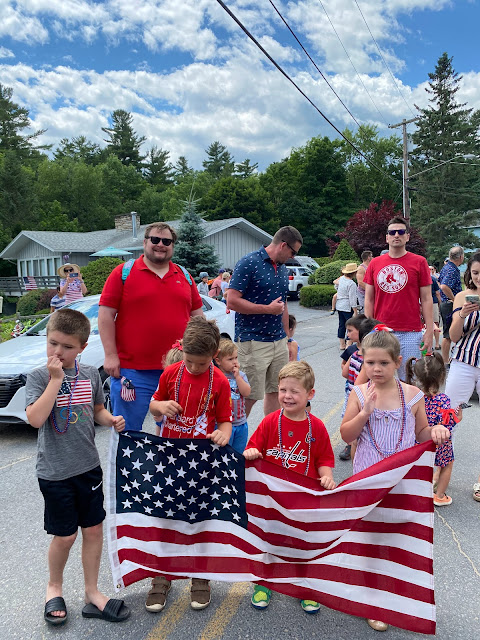 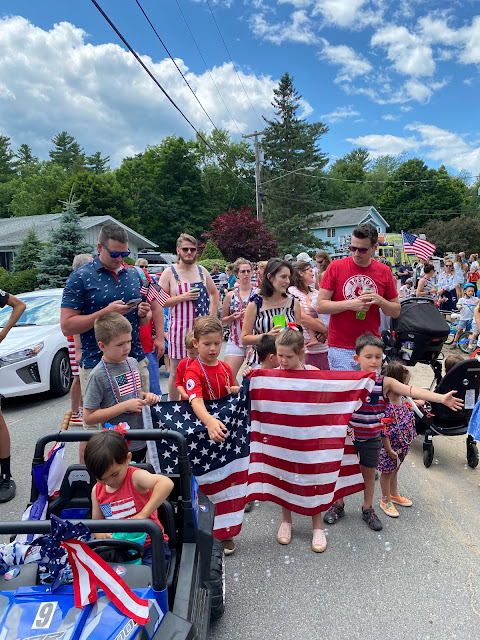 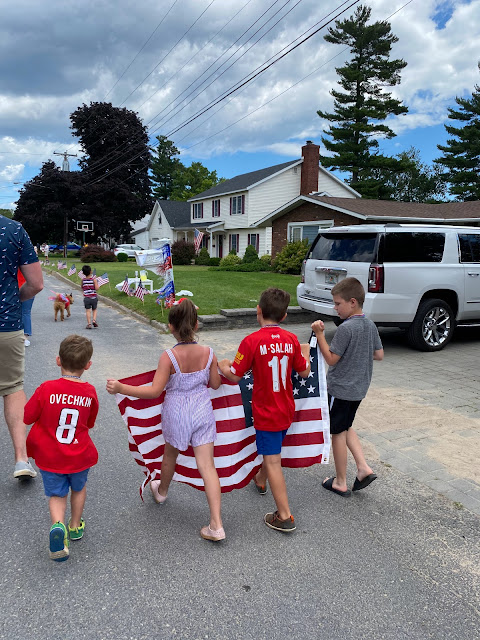 Our youngest son has been growing his hair and beard for a little over a year, ever since he ended his career as a field artillery officer in the Army and started grad school.  For the Fourth, he got a special haircut. Yes, he paid someone good money to give him a redneck mullet.  He went off in the morning, presumably to get a long overdue "real" haircut, and came back to surprise us with it!  We got a good laugh out of that. And as if the silly haircut wasn't enough, his parade outfit was short overalls emblazoned with Old Glory, no shirt underneath.  (Stop, you're killing us!)  When he walked into his aunt's house, where many of his Pearl aunts, uncles, and cousins were gathered to get ready to march in the parade, he was heard to say, "Did somebody order up some freedom?!" 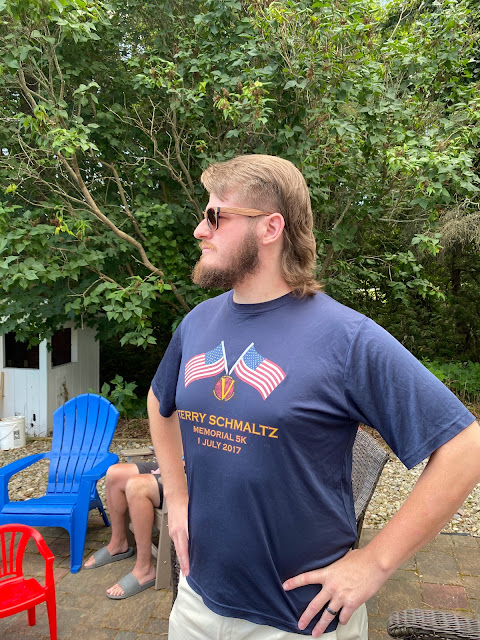 These three Pearl cousins were born within a six-day period; the nephew on the left came first, our youngest son came four days later, and then the niece in the middle came two days after our boy.  We called them "the triplets"...before there were TWO sets of ACTUAL triplets in the family!
We were able to get a group photo of many members of the newest generation of Pearls, the children of our boys and some of their cousins. 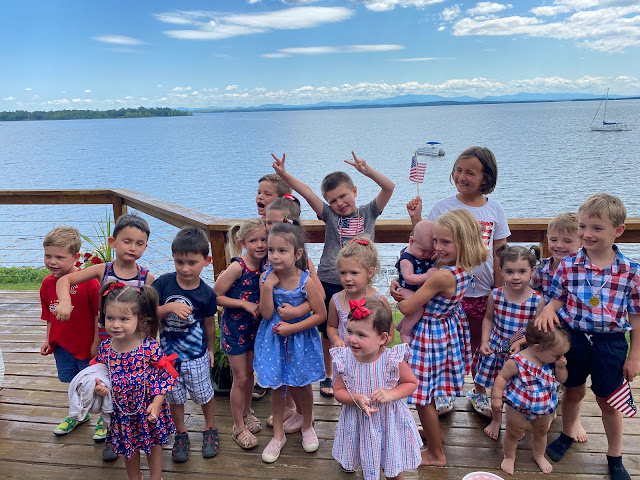 The fun wasn't over when the parade ended, though. Afterward, our crew said goodbye to the extended Pearl family and went back to our Oyster Haven haven for a cookout.  And then when the sun finally set, there were sparklers, glow necklaces, and the next-door neighbor's annual Independence Day fireworks, a truly spectacular show which we can watch right from our own back yard. 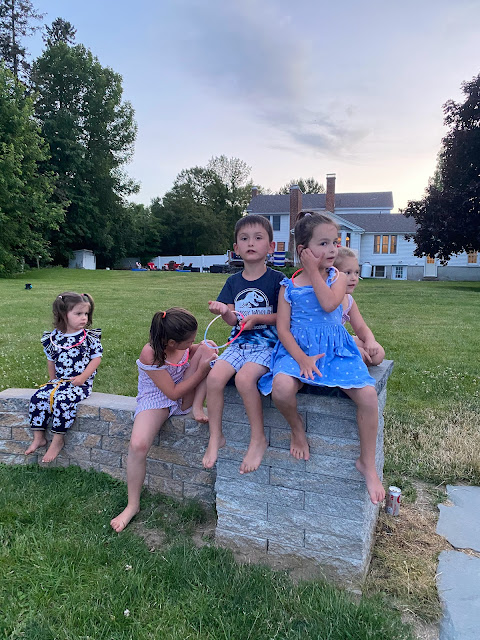 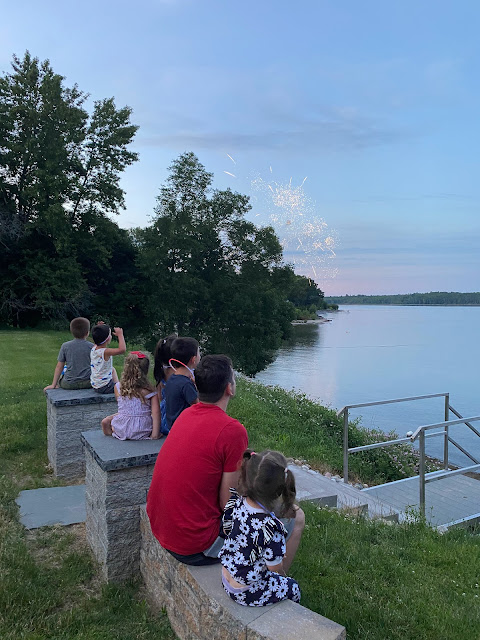 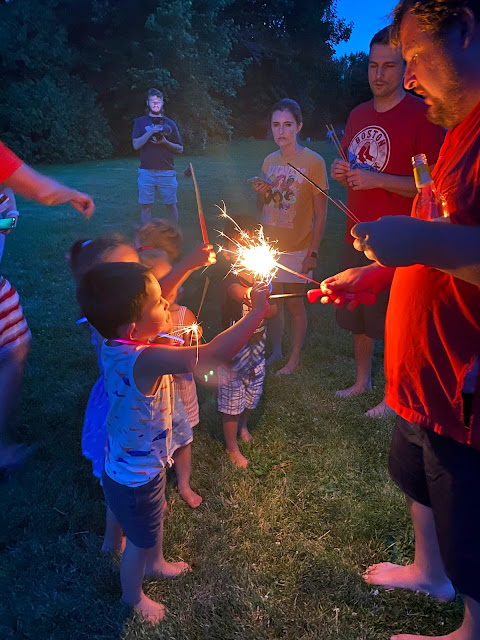 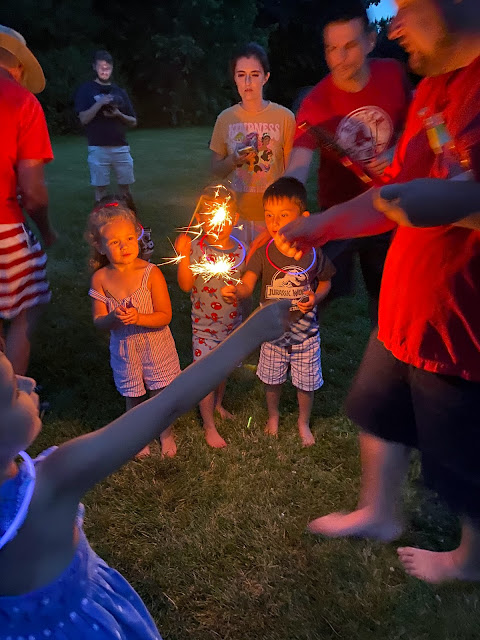 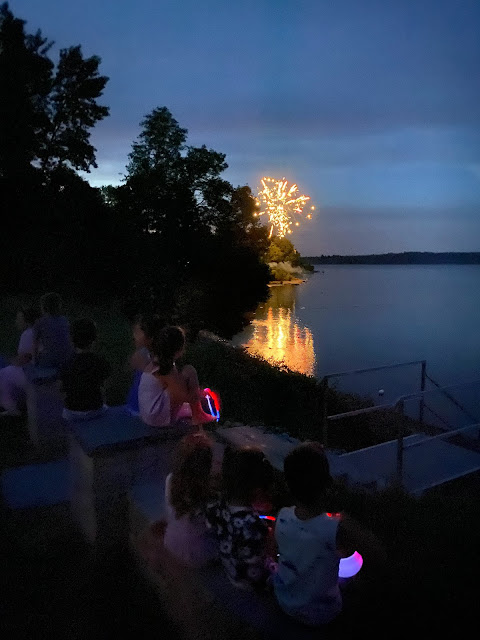 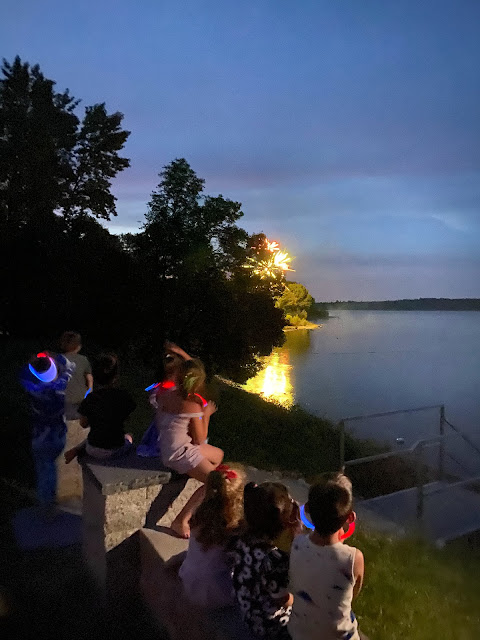 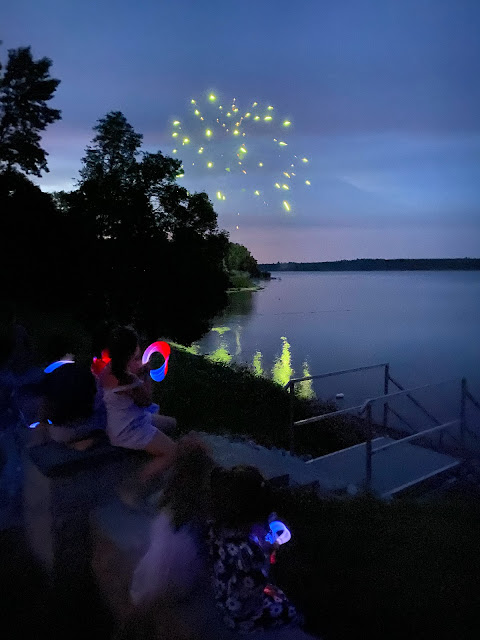 There are times when I don't recognize my country anymore, and I worry about what the future holds for our boys and their children.  I love them all more than life itself!  But on days such as this one, when we celebrated America the Beautiful with such innocent joy and happiness--with hot dogs and hamburgers on the grill, ice cream sandwiches, fireworks booming nearby over the lake, and the kids all running around the lawn at Oyster Haven long after it got dark, way past their bedtimes--it was hard to feel anything but hopeful.
When I look at the faces of my grandchildren I see the future, and it looks bright. 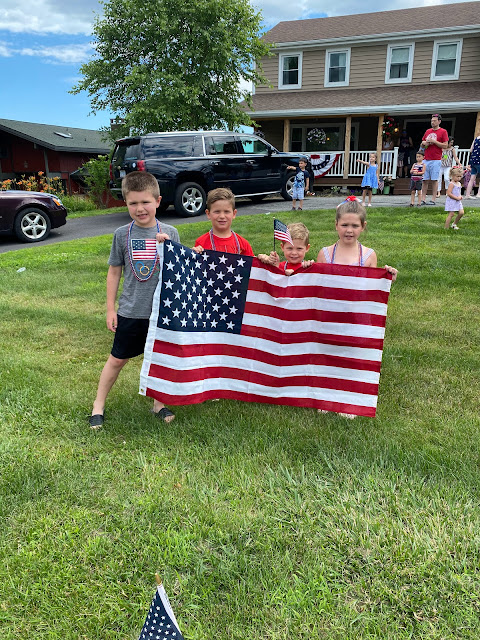 God bless my family, now and always.  And God bless America.  (I'm officially ordering up some freedom! Are you with me?!)
Posted by Laura Pearl at 12:53 PM