I started dating my husband in August of 1973, shortly after we’d both turned 15. He was an amazingly good skier.  He had almost made the US National team for his age group a few years before I’d met him, and he could have pursued the Olympic competition route if he hadn’t been more interested in having a more normal high school experience, where he could play seasonal sports.  During our high school years, he excelled in football and basketball, enjoying recreational skiing whenever he had the opportunity.
My husband’s family skied regularly at Whiteface Mountain, where they got a family pass every year. (Whiteface is home to an Olympic training site and was a venue for alpine skiing competitions during the 1932 and 1980 Games; the mountain is known for having the greatest vertical drop East of the Rockies.)  I had been skiing for a number of years, too, when I met him; however, I’d never been on any trails even close to as challenging as the ones he routinely conquered with ease at Whiteface and other ski resorts like it.  But once we started going out, I often went to Whiteface, which was about a 45-minute drive from our hometown, to ski with him, his dad, and his siblings.
A born teacher and coach, my new boyfriend spent hours with me that first winter, patiently giving advice on how to improve my technique and picking me up whenever I fell down and sat in a snow-covered heap, convinced that I’d never “get” it.  I often begged him to just go and ski with his family, because I was holding him back; but he never gave up on me.  And before that ski season ended, he'd made me confident enough to ride the chairlift to the very top with him.  I might not look as pretty as he did doing it, but because of all his help and encouragement, I could now handle the black diamonds at Whiteface—and trust me, they are extremely steep and intimidating!
All of that seems like only yesterday...and yet, it happened many, MANY years ago.
Last week, we took a long Sunday drive.  It was a glorious, sunny day.  We visited my dad’s grave, about a half-hour away, and then drove on another half-hour or so to the town where my husband’s mom grew up.  On the way, we passed that ski mountain that had played such a big role in our early courtship 49 years ago.
No one took as many pictures back then as they do today, in the age of the iPhone camera, and I don’t think there’s more than one, or perhaps two, of us together at Whiteface when we were young. So we figured we should pull over and take a selfie in front of it, for old times’ sake.

We did ski as often as we could with our boys for a number of years, before they got too busy with other sports (and lift tickets became prohibitively expensive!). Unfortunately, however, it’s been more than 10 years since either one of us has been on skis.  I’ve got osteoporosis now, so I’ll probably never get back on them again.  (One bad fall, and I could break a hip.  No thanks!)  So I sure am glad that I got to enjoy this exhilarating winter sport so often and so much when I had better bones.
Life is short, dear readers, isn’t it?  It passes in an instant.  And one day you find yourself older than you ever thought you’d be, like me, looking back at things you did half a century ago and saying, “It seems like only yesterday...” 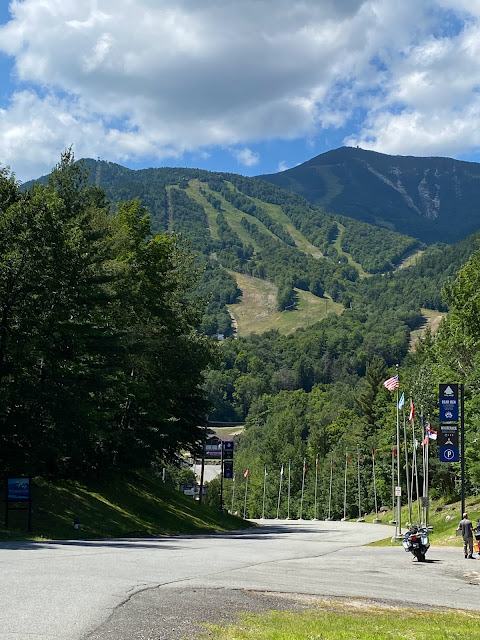