A Poignant Lesson about Dealing with Loss

Those of you who've been following along here for a long time (hi, my handful of faithful readers!), or those who might have only stumbled upon this humble little blog in the last few years or so, know that my husband and I made a big move south in March of 2017.  (It's a recurring topic here at String o' Pearls; but old folks like me tend to repeat their stories, as you might have heard.)  We left our longtime home in NH, where we'd lived in the same house for 26 years, and moved to a small town in Northern VA.  Three of our five sons had moved to the same area (two of them are practically next door neighbors, and the third lives less than two hours north of them), and they appeared to be putting down permanent roots; so after much soul searching (and much encouragement from the most loving peanut gallery imaginable), we decided to relocate.  We realized that if no one was going to be moving back to the Northeast, our home in NH didn't make much sense anymore...and we found a perfect little town as close to midway as possible between the two places where our VA boys lived and bought a house there.  At the time, we had ten grandchildren with a couple more on the way, and six of them were in VA.  With 3/5 of our sons and more than half of our grandchildren in the same vicinity, it appeared to be as perfect a situation as we could hope to expect.

Our oldest son and his wife and four little girls were living in the Midwest, near her parents.  We figured they would end up settling down out there.  Our youngest son was still single and in the Army, stationed in Germany, and we didn't know where he would end up when all was said and done.  But still, three out of five ain't bad, right?  The decision to move seemed like a no-brainer.

We had a few months in VA getting our new nest feathered, and then we went up to NY, where we spent the summer escaping the VA heat, enjoying Lake Champlain, and managing our Oyster Haven VRBO rental property.  And what do you know: during that time, our firstborn decided to make a radical career change that would have him working out of DC before too long...and living a stone's throw from us.  So when we returned from NY in early September, his wife and four daughters moved in with us while he finished his training.  Within a few months, they'd found a sweet old farmhouse to rent, and it was less than 20 minutes from our house!

A quick aside here: our fourth son's triplets were born right about the time our oldest son's family came to VA. Things got really busy really fast, I'll tell you!

I believe that there was some divine intervention at play with our move, I really do.  We sold our NH house for the full asking price without ever having to put it on the market and found the perfect cozy house in our new VA town, where we could become a central meeting place for our ever-growing family. We didn't initially win the bidding war for this house, but then got it because the other buyer's deal fell through.  Everything just fell into place.  I believe that God arranged things so that we could have not just three but all four of our sons who were married at the time and all of our grandchildren living so close to us that we could be a part of their daily lives.  It's been almost too good to be true.

In the almost five years that we've lived in VA, seven more grandchildren have been added to our string of Pearls, and two more will make an appearance in the coming months.  Our youngest son has gotten out of the Army and is married now.  It's just been an amazing time for our family.

Cue the deep sigh here...because life throws you curve balls, and change is inevitable. Our oldest son has switched companies and is going to be based in Iowa now, so just after the New Year he and his wife had to pack up and move back out to the Midwest.  They bought a charming farmhouse with more than four acres of land--and they are our aspiring homesteaders, so they plan to get chickens and sheep (which they had here in VA) and maybe even a cow! For our son, as far as job satisfaction and quality of life (time at home with his family!), this is just the best move ever. But when he and Regina and their five kids took off in their packed-to-the-gills minivan last Saturday, we felt a bit bereft. That, my friends, was a tough goodbye.

This feels like an enormous loss for my husband and me.  I get weepy-eyed often, trying to adjust to the reality that they won't be a stone's throw from us anymore, that when we say goodbye to them now and they ask "When will we see you again?" it might not be for months.  (Every single time they left our house when they lived near us here, they would ask that.  And it was never more than a few days until we saw them again--a week at most.)  We are going to miss them all so much...but I guess I should dry my tears, since we are planning to drive out to Iowa pretty soon, to help out in the week or two leading up to the birth of baby #6, who's due in early February.

I've been way too long-winded with my lead-up here.  I wanted to share something amazing that happened today, but I wanted to make sure you knew just how timely this occurrence was, given my current emotional state.

Our oldest son's four girls (aged 6-10) are doll fanatics. They have American Girl dolls, baby dolls, and porcelain dolls, and they are all played with regularly. Recently I was making a drop-off at Goodwill and I decided to pop in and see what they had.  There was a shelf piled high with porcelain dolls, so I combed through them and found three really pretty ones that were in great shape, priced between $5 and $8, and I decided that I would get them; as long as I could find a fourth, I thought I would bring them out with me when we go to Iowa, as housewarming presents for my favorite doll enthusiasts.

I went to another thrift store (one that I used to frequent with Regina...sniff!), and my search paid off.  I found a never-played-with Little Dutch Girl doll, still in the box with a Royalton Collection brand tag, with her arms and legs still protected by bubble wrap.  Her white garments had some brown mildew or age stains on them, but I spot-cleaned them and she looked terrific. 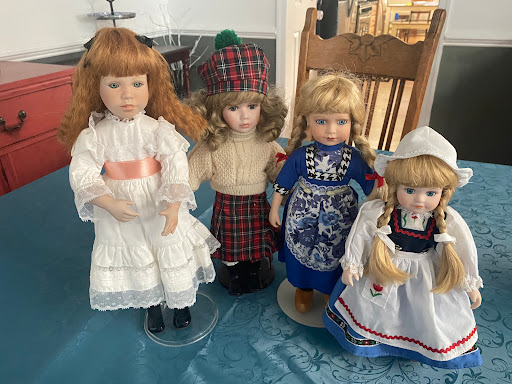 Today I was about to throw away the box that the Little Dutch Girl doll had come in, but as I turned it over, I saw that there was an exceedingly poignant hand-written message on it. 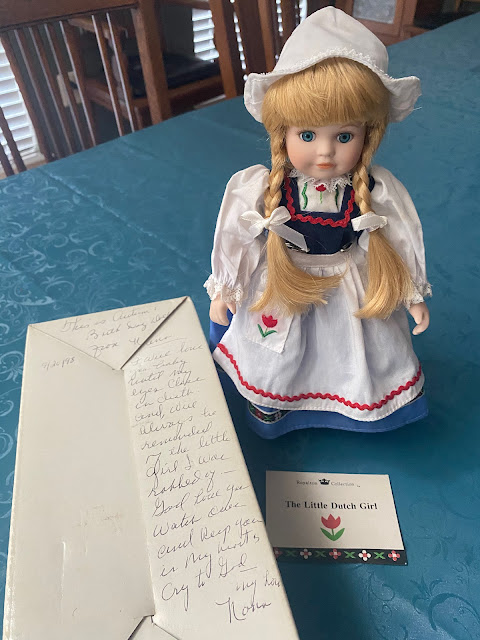 In case you have trouble reading it, here's what it says:

This is Autum's [sic] Birth Day Doll from Nana--

I will love you baby until my eyes close in death,

and will always be reminded of the little girl I was

God love you, watch over and keep you

Oh. my. goodness!  This is so sad...but if there was ever a time that I needed to see what real loss would be like, this is it.

Did Nana buy this doll for her granddaughter's birthday, even though the little one had already died? Is that why it was like new in the box?  My heart aches for the poor woman who wrote this note!

I will miss my babies terribly.  But I will be able to see them--maybe not as often as I'd like, but I will... unlike this poor grieving grandmother!  If this Nana is still alive, I pray that God has given her solace and peace! And if she's not, I hope she's been reunited with her beloved little darling in Heaven.

Even though five (soon to be six) of our grandchildren will be living a two-day drive away from us, Papa and Grammy still have a very full, very grandchild-rich life in VA.  Just this past week, we had dinner at son #2's house one night, with his four little guys (I forgot to take any pictures).

Another night, we watched son #3's sweet five-year-old daughter overcome her initial shyness to cheer with her squad on the sidelines at her Christian school's varsity girls' basketball game. 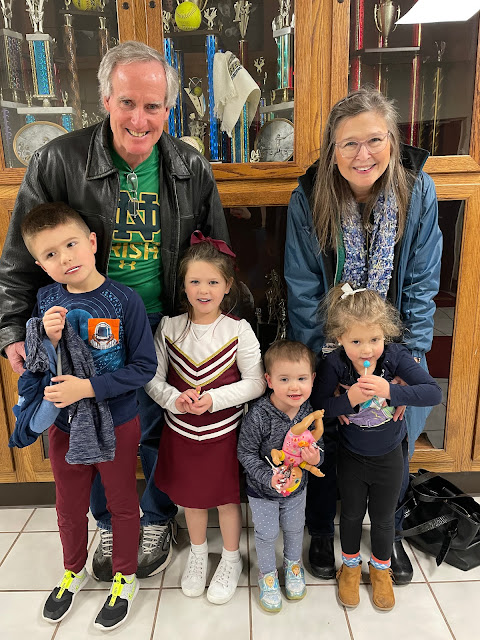 One morning, we babysat for the cheerleader’s two younger sisters while her mom had a 28-week sonogram to check on her baby brother.

We had son #4's four little ones over for two daytime playdates.

All that in just one week.  How extraordinarily fortunate am I?

I know that I can't even begin to imagine what true suffering, the kind described in that heart-breaking note on the box, is like.  Nevertheless, I reserve the right to feel sad about what we've lost.  Lucky for me, though, there are still plenty of adorable little folks nearby who can help Grammy to remember how very blessed she is!