A Birthday Celebration, and Celebrating a Birth

Last Sunday, we had a family get-together to celebrate the late January/early February birthdays in the Pearl family.  Son #5 turned 29 in January, and then exactly a week later, son #4 turned 34.  Our granddaughter Princesa (the second oldest of son #3's four kids) is about to turn 6 in February, followed a few days later by her uncle (our son #2), who will be turning 37.

Gulp!  It's hitting me that when our "baby" celebrates his next birthday, he will be turning 30.  Which means that in January of 2023, all five of our boys will be in their 30's...for a little while anyway, until our firstborn turns 40 later in the year.  40!!

It's fine.  I'm fine.  No biggie, really.  Except...WHERE IN THE WORLD DID THE YEARS GO?  I MEAN REALLY, Y'ALL, WHERE?  (Did you notice that "y'all" I threw in there?  I thought that after almost five years of being a Virginian, I should start talking like one.)

With our oldest son and his family now settled in their new house out in Iowa, this recent family party was a tad smaller that the ones we've been hosting since we moved here in 2017.  We had 20 gathered together in all, eight adults and 12 children (between the ages of one and seven).  Our youngest son, although one of the birthday boys, couldn't be here either, because he and his wife live in Nashville; but we FaceTimed with him during the festivities. And in honor of him, I made a pin-the-tail game for the kids to play that featured one of his and his wife's beloved (or at least tolerated?) kitty-cats. 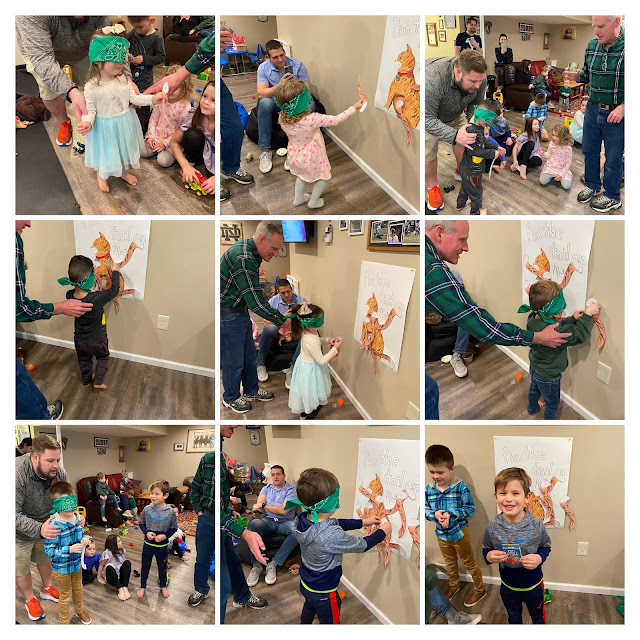 Instead of spending hours slaving over a hot stove, my husband and I opted to order and pick up Chipotle catering for 20, and I can't recommend this enough. Everyone loves it, there are always leftovers, and they even give you the disposable dishes, serving utensils, plasticware, and napkins.  It's not cheap, but it's well worth it for a special occasion.  All I had to make was a Bailey's Irish cream cake (a crowd-pleasing recipe from Emily Stimspson Chapman's cookbook) and two dozen cupcakes.  Easy peasy. 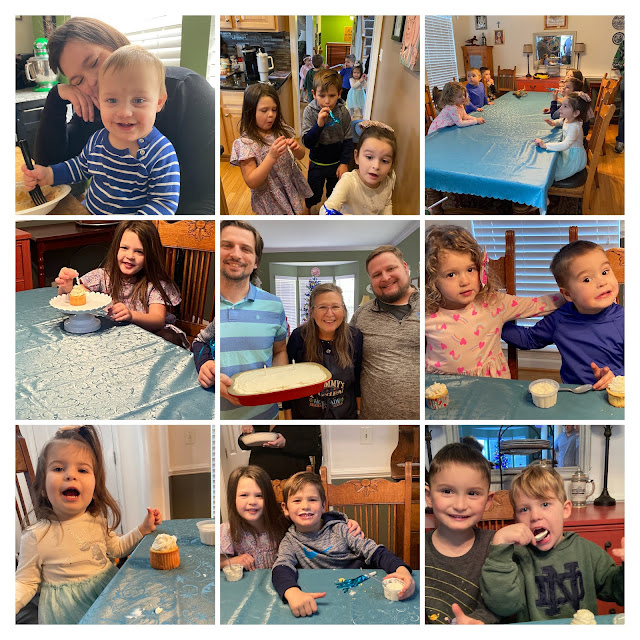 I am always happiest when all of our peeps--or as many as possible--are with us, under Papa and Grammy's humble roof, making memories together.  Even though my husband and I have a favorite post-party joke that instead of putting the house back together again after everyone has gone home, perhaps we should just torch the place and start over (ha ha!), we truly wouldn't have it any other way.  It gets very messy, but it's always SO worth it.  And I don't know what we'd do without that spacious basement that we finished off with our own two hands. (Actually, my favorite guy's two hands did a lot more of the work than mine did, but I helped where I could.)
Three days after our little birthday shindig, we got the happy news that our firstborn son's wife had given birth to their new baby girl, who is their 6th child this side of Heaven.  She wasn't due until February 10, but arrived about two weeks early.  She was born at home with the help of a midwife, and mom and baby are doing well!
So we have 18 grandchildren now, and yet another January birthday to add to the family calendar.  God is so good!
I love my gang so much.  I feel like the luckiest woman on earth.  I like to quote Jim Harbaugh, whose family motto growing up was, "Who's got it better than we do?  Nobody!"
Posted by Laura Pearl at 2:24 PM