Our oldest son's wife asked me this summer if I'd be interested in having a weekly sewing class this school year for her four homeschooled daughters (aged 10, 10, 8, and 6).  While the girls have done a bit of hand-embroidery and hand-sewing, she hoped that I could give them a basic course in how to use a sewing machine.

As I was largely self-taught (and learned through years of trial and error--I tell you, the seam ripper and I got to know each other very well!), I went online and typed in "teaching kids how to sew," and I got lots of great pointers on how to proceed: YouTube videos and blog posts, some of which offered printable pages--not just patterns, but also sheets of dotted lines on which to practice machine sewing.  There were sheets of straight lines, and curved ones, and geometric patterns that will help them practice how to change direction.  (I never would have thought of having them practice machine stitches on paper; I would undoubtedly have given them material scraps instead.  But for true beginners, this appears to be a great way to get them comfortable with the way the machine works before they graduate on to sewing on fabric.) 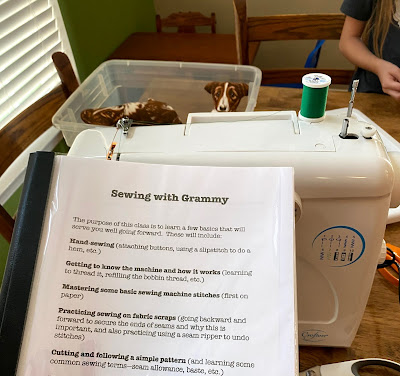 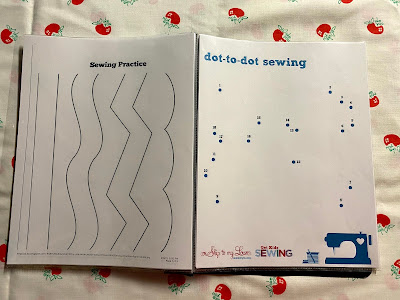 Aside from how-to advice, I was tickled to find some free printable beginner's patterns.  The first one I will have them use, after they become adept enough at working the machine, is for a very simple sleeveless dress that will fit their beloved American Girls.  (I made one up and it's being modeled by one of my 18" porcelain dolls, and I will keep it on display during our classes as an incentive for them to keep learning.)

We had our first class on Monday, and we started with a couple of introductory projects for all four girls. They hand-sewed some buttons onto fabric scraps, on which I'd made pictures using fabric paint, and then they slip-stitched the opening of a small stuffed puppy dog closed.  In future weeks, the 10-year-old twins will be working with the sewing machine while the younger girls do more hand-sewing projects.  I did let the twins try doing a few lines of straight stitches on the machine, but otherwise decided to keep the first day fairly easygoing. 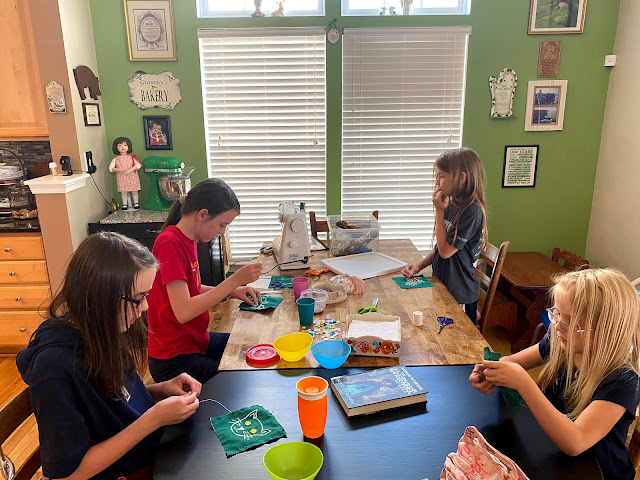 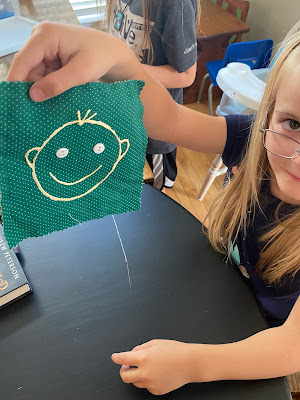 We had an impromptu tea party after the lesson, with peach tea and shortbread cookies.  And then they all got to go home with little stuffed puppies (pets for their American Girl dolls?) and fabric painted pictures they'd finished off by sewing on the buttons.

The only thing I forgot to think of was making a little fabric square picture for their 3-year-old brother, who played in the basement while the girls were having their sewing lesson.  We did have a stuffed dog for him, though, and promised that there would be a car with button wheels in his future. 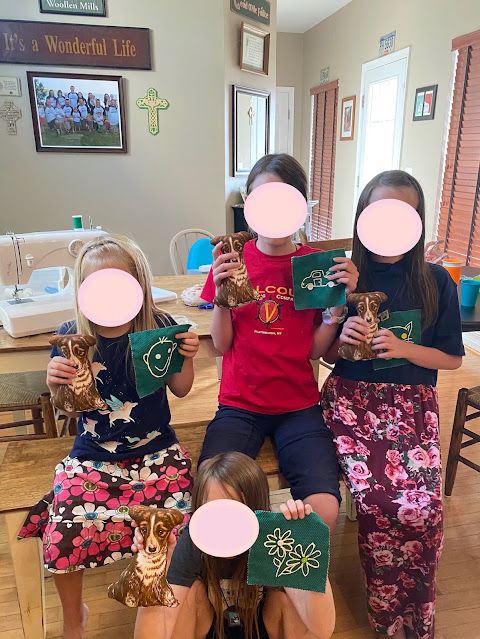 I think day one would have to be considered a success! And I am so excited to see these girls grow in confidence as they learn new skills each week.
This opportunity to do a weekly sewing class with my granddaughters is something that never would have happened if we hadn't left our longtime home in NH and made the move to VA in 2017. I can hardly count the blessings that have flowed from that decision!
Look for updates on my little seamstresses' progress in the coming months.
Posted by Laura Pearl at 10:28 AM