If you are one of the few people who does come here often, you might be wondering if this has morphed into a sewing blog now or something.

No, it hasn't; but I am a Grammy blogger (not to be confused with a mommy blogger, which was a popular thing to be back in blogging's heyday).  And sewing with four of my granddaughters--the offspring of our firstborn son--is currently one of my favorite Grammy activities.  So there you go.  (I will blog about something else one of these days; but this is not that day!)

For the past three Monday afternoons, I have been holding a little Sewing 101 course at my kitchen table for four young budding seamstresses.

Each week, I've tried to plan projects that are fun for them, but as an added bonus also give them something to bring home at the end of the lesson (doll-related items are always a good choice!). 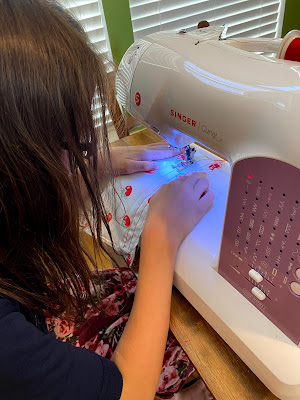 They pretty much aced that task, so then I had them sew up some simple 5x7" American Girl-sized bed pillows I'd cut out for them ahead of time.  They sewed the seams leaving an opening for stuffing, clipped the corners, and turned them inside out. 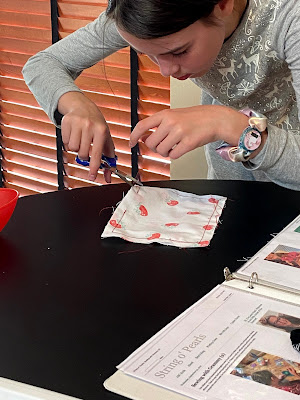 When they had accomplished this, I called their two younger sisters (8 and 6) up from the basement playroom to stuff the pillows and hand-sew the openings closed. 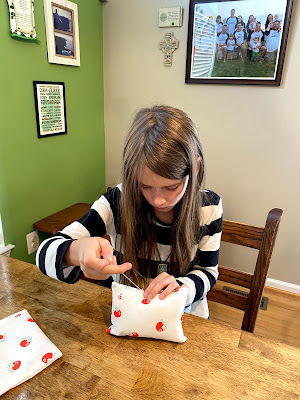 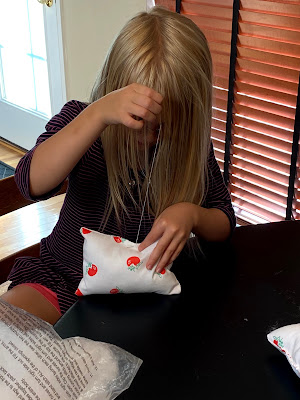 When I went online a month or so ago to figure out the best way to go about teaching young kids to sew, one of the bloggers whose site I visited stressed the need to be okay with their efforts being imperfect, in order to let them learn without too much interference.  I knew that with my tendency toward perfectionism I might hamper their learning by itching to take over too much.  So I've been trying really hard to let them do their own work and make their own mistakes.  (Sewing with Grammy will be a good learning experience for me as well!)

These sweet granddaughters are so generous with each other and don't appear to have that need to be in complete control of the outcome that their Grammy struggles with.  The older girls were perfectly happy to have the younger girls do the finish work on the pillows, and they did a bang-up job.  So it was truly a wonderful team effort.  I am so proud of this little sewing circle of mine!

Yes, someday, I shall write about something other than sewing lessons...but here's the problem these days, you see: 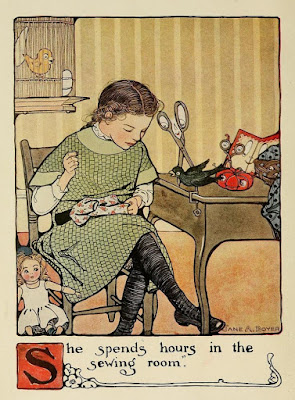