Last Saturday the four sons who live in VA came over to our house to celebrate an early Mother's Day with me. (I like to call it a "Mother-Boy" party, but unless you watched a series called Arrested Development you won't get that reference.)  This is an annual event that was the brainchild of son #2's wife, who I think is projecting ahead to the day when her own four boys are grown men.  I never would have thought to ask for this sort of thing, because I love my daughters-in-law very much, and my grandchildren--don't even get me started.  Having the opportunity to spend time with our boys' growing families is the very reason we moved down here in the first place.

But it is true that when your babies are all grown up, you sometimes feel a deep nostalgia for the days when they all lived under your roof and life revolved around your own little nuclear family.  When we get everyone together at our house, it's so much fun--but extremely chaotic!  It's hard to have an uninterrupted adult conversation. So this one day a year when our boys (at least the four who do live close-by) come over all by themselves gives us some very sweet and precious mother-son time together.  Not to mention the "brother time" it gives them, too.

One of my husband's younger sisters married a man who is the youngest of five boys.  And from time to time, she will encourage him to take trips to visit his mother out west on his own, without her or their kids. He will balk, but then she'll explain that when she's with him, he doesn't give his mom the undivided attention he would if he was by himself.  She is so thoughtful!

Women like my daughter-in-law and my sister-in-law are extremely wise and generous, and I encourage you young moms out there to put this idea of having your chicks fly home to your nest unaccompanied sometimes in the back of your minds, and try to make it happen now and again when they're all grown up and raising families of their own.

We chose to stay in rather than go out for dinner (actually, that’s what we always do!). My husband cooked steaks on the grill.  We sat on the patio beforehand and then around the dining room table, and we talked and laughed.  It was a simply perfect Mother's Day for me. 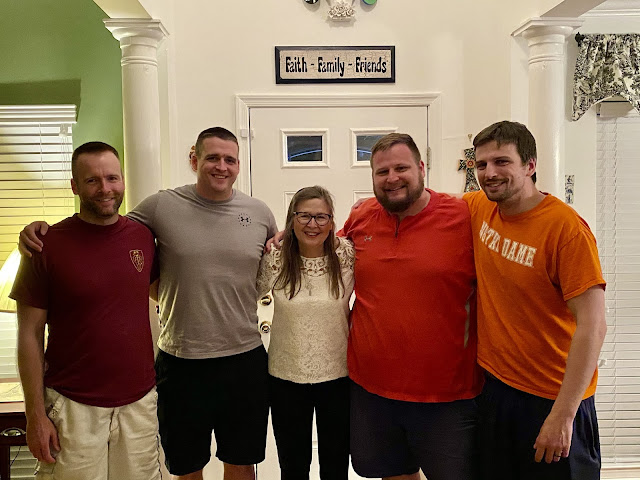 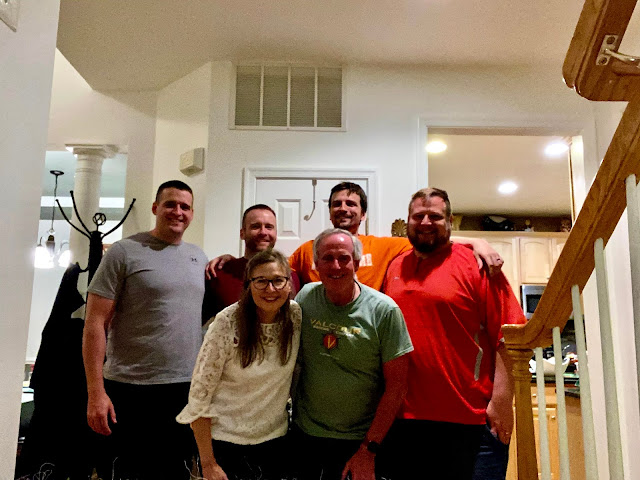 Today, we’re celebrating with my mom, who came down from Upstate NY to stay with us for a few weeks while the sister she lives with is on a well-deserved vacation. She arrived on Tuesday and went almost straight to the hospital, where she spent the next three days—but that’s a long story and the rest of this post was prewritten before she ever got here. So for now I’ll just tell you that she’s home and doing great and has even already visited with five of her great-grandchildren, after a rather drama-filled beginning to her time in VA.  (As she joked, always the drama queen!)
Happy Mother's Day, dear readers!  I hope you are being treated like the queens you are!
Posted by Laura Pearl at 6:46 AM