An Ode to Snail Mail (and Blogging!)

As a graduate of the College of the Holy Cross in Worcester MA (where I earned my BA in English in 1980), I have a subscription to Holy Cross Magazine that comes quarterly in the mail.  The latest edition, for Winter 2021, included an article that brought back so many poignant memories for me.  It was called “Ode on a P.O. Box,” and I found it as I flipped through the glossy pages and came upon an image that stopped me in my tracks: a picture of the vintage bronze-gilded Holy Cross P.O. boxes—the very same ones that lined a hallway in the Hogan campus center at HC back in my day. 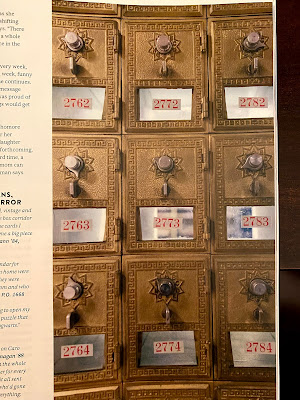 Sadly, there has been a relatively recent change at the Mount St. James Station Post Office at Holy Cross, and those old-time beauties have been retired after about a century of service.  These days students receive less traditional mail and more packages that don't fit in the slender P.O. boxes that were "once essential," as the article points out, but in these modern days of texts, emails, and Amazon deliveries had "become anachronistic."

Anachronistic!  As in "pertaining to or containing an anachronism [which is something or someone that is not in its correct historical or chronological time, especially a thing or person that belongs to an earlier time]."  Oh my, no wonder I feel so sad hearing that those P.O. boxes known to so many generations of HC alumni are gone now.  (They are gone, the article says, but "remain beloved.")  I, too, have become a bit anachronistic, I fear! The times, they are a-changin', so swiftly that it makes my head spin. And I find myself feeling deeply nostalgic for an earlier time to which I belonged, a simpler time.  A time when people routinely kept in touch via hand-written letters.

I don't remember my P.O. box combination, but I'll never forget my number: 981.  That was my postal address for all four years that I lived on that bucolic college campus in New England, atop what was always called simply "The Hill." I can remember being filled with anticipatory excitement every time I went down that hallway lined with old-fashioned-looking, ornate little bronze boxes, hoping against hope that when I opened mine I would find a letter from my boyfriend (my high school sweetheart who was far, far away during those years, out at Notre Dame in South Bend, IN—now my husband of 40 years).

Nothing beat getting a letter from that guy.  Nothing.  I would be walking on air as I closed and locked P.O. Box 981 and found a quiet place to read it.  Who could blame me, though, when his letters were so sweet?  He was already kicking around the M-word in a joking, roundabout way when we were just freshmen in college, in a letter dated March 15, 1977: "Right now I couldn't think of a better life than one with you.  I wouldn't care if the prettiest, most desired movie star or the most famous girl in the world was dying to marry me, I'd say 'no' before she even finished talking if you wanted to marry me, too."  And here is perhaps my favorite passage from any of the letters he wrote when we were apart at school: on March 22, 1977, after visiting me at Holy Cross on his spring break, he wrote "...you looked over and smiled at me and that look drove me wild.  It was the prettiest and nicest look I've ever seen anywhere.  All I could do is just stare at you.  I'll never forget that look."  (Sigh...I loved what he said so much that I wrote "the look" into Tom and Grace's story in my novel Finding Grace.)
We did talk on the phone, of course (probably more than we should have!); but remember, that was ages before anyone had a cell phone.  We did have land-line telephones in our rooms, with long, coiled cords attached that limited our freedom of movement when using them; but if we wanted to talk for any length of time, we had to wait until the rates went down at night.  There were a lot of late-night phone calls, let me tell you.  But even with the lowered rates, it could get expensive; therefore, we had to rely predominantly on letters to stay connected.  In one of his letters, dated Oct. 6, 1976, my husband tells me that he's sending me some money.  I'd called him the night before, and he says, "I kept the time on my clock and it was exactly 85 minutes.  I figured it out on a calculator and it came to $11.96.  It was worth it though."  My hero!  He was on a Navy ROTC scholarship and had a $100 monthly stipend, and he would often send me checks to help defray the cost of my phone bill.  In a letter from Feb. 22, 1977, he told me that we were going to have to take it easy for a bit, because his most recent phone bill was a whopping $53.67 (more than half of his stipend money for that month!).
I don't have all the letters that my husband wrote to me during our four years apart at college (some were lost when my parents cleaned out their attic and moved from my childhood home), but I do have many of them.  I keep them in a treasure box and can’t imagine tossing them out (yet, anyway), even though I have actually re-read them no more than a couple of times over the decades I’ve been married to that extremely handsome young letter-writer—who could be pretty romantic when he wanted to be! 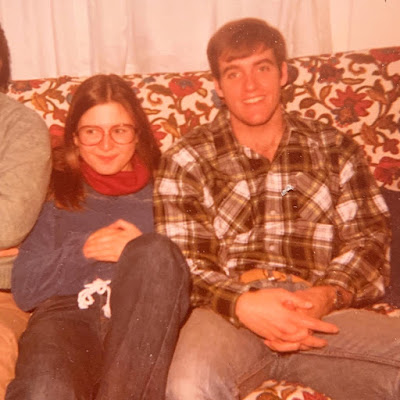 Hand-written cards and letters are nicknamed "snail mail" these days, and people act like you're some kind of dinosaur if you still correspond that way.  But I feel sorry for kids in this modern age...they'll never know the kind of exquisite joy I felt when I opened my P.O. box and pulled out a letter addressed to me in my boyfriend's inimitable bold penmanship and postmarked "South Bend, IN." 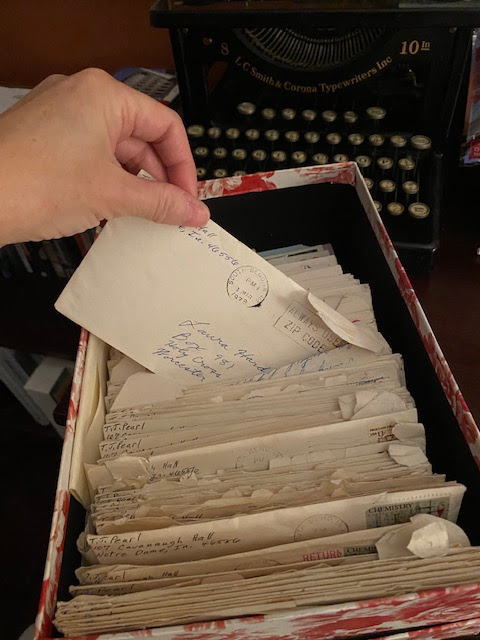 When our oldest son began his freshman year at Notre Dame in the fall of 2002, I was determined to print out each and every email he sent home; but before long, I gradually stopped doing so.  It just wasn’t the same as saving letters. By our firstborn's sophomore year in college, the dorms didn't even have land-lines anymore, and most of our contact with our five boys when they were away at college happened via texts, emails, and Sunday calls from their cell phones.  I was absolutely fine with that, because I just wanted as much contact with them as I could get, any way I could get it...but it is a truth universally acknowledged (as Jane Austen might say) that texts and emails are just not the same as letters.
I’ve gotten off social media recently, and I’m determined to use my newfound free time—the time I used to spend scrolling Instagram and Twitter—to get back to my first love, writing here (at what was always called "String of Pearls" until just recently, when I tweaked its name a tiny bit to give it a bit o' Irish flair).  And it just occurred to me that snail mail (which I miss) is to texts and emails what full-length blog posts (which I also miss) are to Instagram mini-blog posts, kind of; so I guess this post can be considered an ode to blogging, too.
Posted by Laura Pearl at 11:39 AM

Email ThisBlogThis!Share to TwitterShare to FacebookShare to Pinterest
Labels: blogging, misc., my guy