My husband always hoped to retire early from his job as a commercial airline pilot.  His original plan was to stop working at 57, in 2015, when the youngest of our five sons graduated from college.  God (and the airline he worked for) had other plans, however: when his company had to file for bankruptcy in 2005, it meant a painful pay cut for him and loss of his pension, and he realized that in all likelihood, he was now looking at working until mandatory retirement at age 65.

We have been among the luckiest, though, and we know it; his airline bounced back and he was steadily employed there for 32 years.  He was never furloughed (although there were a few times during his flying career where that possibility looked imminent and we were ready to sell our house and downsize if we had to--thankfully, we never did). But as I said, we were among the lucky ones.  It was not always a perfect job, but it was a very good one.  It afforded us the opportunity to give all of our sons a K-12 Catholic education, and for me to be a full-time SAHM and tend to the home fires while he traveled around the world, sacrificing much-cherished time at home with his beloved family in order to support us.

His early retirement in September of 2020 came about as a direct result of the Covid-19 pandemic.  That black cloud--with all the storms it stirred up in its wake--had an unexpected silver lining for us.
My favorite pilot and all-around favorite human, who had been flying almost exclusively to Tel Aviv in recent years, bid Rome trips for February of 2020 and was thrilled when he got them.  In his decades of international travel, Rome was far and away his favorite city in Europe.  We had taken a week-long vacation-of-a-lifetime to bella Roma in March of 2019; now, he hoped that I would be able to accompany him on at least one or two of his five working trips that month--maybe more, if I could tear myself away from the grandkids.  I ended up going on two of them.  They were four-day trips, meaning one day to fly over, two days of layover, and another day to fly back.  Four-day trips are much better than the more common three-day trips for bringing along your spouse, because on those you have to cram your sightseeing into one layover day.
Both of those bonus Rome trips were positively magical and provided me with memories that I will cherish for the rest of my life. 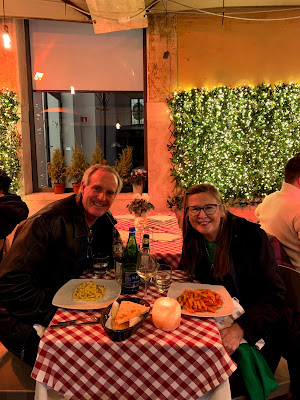 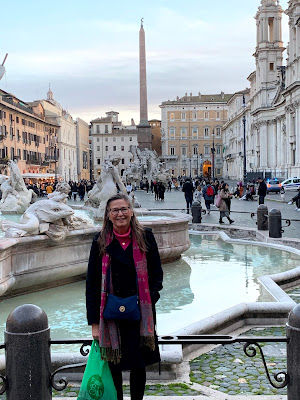 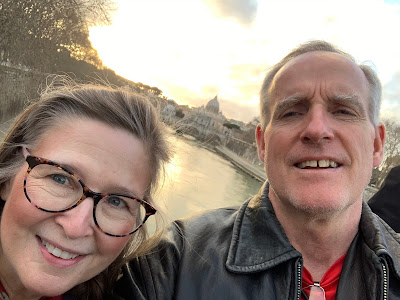 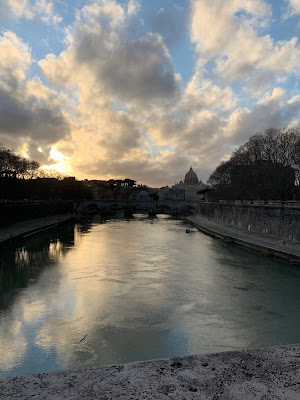 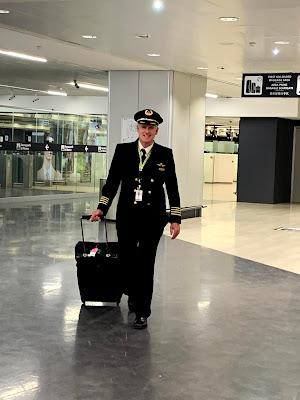 I almost didn't go on that second Rome trip.  It seemed almost decadent to me, jetting off to Italy every other week. My guy had to be in that cockpit, it was his job; I didn't have to be in a business class seat, drinking champagne, eating four-course meals, and watching movies--that just made me spoiled rotten!  And I've always been a bit of a white-knuckle flyer, there's that, too: I had mostly gotten over my fear, from years of frequent airplane trips to see my kids and grandkids; but now that we've settled in VA and so many of them live nearby, I rarely fly anywhere anymore.  I overcame my hesitation, however, and now I am so grateful that I did.  If I could have looked ahead and seen what was about to happen, I might have even tried to tag along with him on one or two more of those Rome trips.
That last month of getting to travel to his favorite city--and even to take me with him a couple of times--was a generous parting gift after a long and satisfying career...because after that, my husband's flying days ended without any fanfare whatsoever.  You all know what happened in March of 2020: lockdowns started, and all overseas flights were cancelled.  And then in April, flights were cancelled again. In May, same thing... My husband was still an employed pilot, but all of his trips were cancelled month after month, and he was at home with me.  We used his time off to do a big DIY project and finished off our basement.  Then in September of 2020, my husband took an early retirement package offered by his airline.  Fewer flights meant that they needed fewer pilots, and he decided to leave so that some less senior pilot might be able to keep his job.  He was ready.  He didn't quite make his original plan of retiring at 57; but he got to retire earlier than he had expected, at 62.
So we are officially in an entirely new phase of life.   And we're loving it.  He is one happy retiree, and though he enjoyed what he did for a living, he doesn't look back and he doesn't miss working.  There are some gray areas in our lives, but retirement is not one of them.
The gray is mostly on our heads, and I'm really starting to catch up with my silver fox. 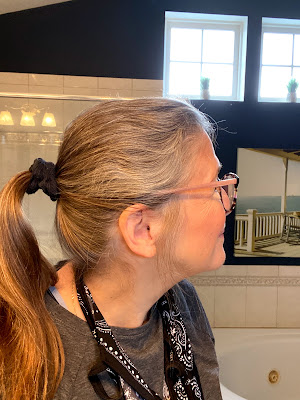 My advice to anyone out there who is currently in the childrearing phase is this: of course you and your spouse should center your life around making a happy and secure home for the children God gives you; but remember to put your marriage first, not your children. It seems selfish, but it is just the opposite.  If you do, your kids will benefit from it. A strong marriage is the healthiest thing you can give them. They will see what a sacramental union looks like and will strive to recreate it as adults, and then their children will benefit as well. And when your children are all grown and gone and have families of their own, you will not look at your spouse and say, "What do we do now?"  If you haven't put your relationship on the back burner for the decades you were raising your offspring, you will be as happy and fulfilled as ever in your empty nest, enjoying the fruits of your hard work over the years with the only other person on earth who really knows what you've been through to get where you are now--and the only other person on earth who can possibly love your children as much as you do.
Anyway, we're both loving the retirement life.  We're loving the Papa-and-Grammy life.  The only hard thing about the season we're in now is the realization that, um...we aren't exactly spring chickens anymore!
HOWEVER--
Last week I celebrated my 63rd birthday.  And my kids surprised me with the greatest gift ever: a 20-minute YouTube video that they'd put together.  It started with little videotaped messages from all the grandkids and then all of our boys and their wives, and it moved on to hundreds of photos from my extraordinarily, undeservedly full and blessed life--from when I was a little girl right up until our recent family get-together at the lake.  It made me laugh out loud at times and cry at others.  It made me feel like the luckiest wife/mother/grandmother--the luckiest person!--on earth.  And it made me feel very loved indeed.
So retirement, and growing older...hey, it's not so bad. In fact, it's really quite good.
Posted by Laura Pearl at 4:27 PM