I can't believe that more than a month has passed since the wedding of our youngest son on Sept. 7.  Back in the early days here at String of Pearls, I would have had a post up about it within a day or two--heck, maybe within an hour or two!--of returning home from the wedding weekend.  But my blogging muscles have atrophied a bit since 2011; and I'm not as young as I once was, either, you know; and I can probably come up with a bunch of other great excuses for neglecting the upkeep of my little corner of the Internet...but the best (and truest) reason for it is simply that I seem to be so busy just living life these days that I have trouble making the time to stop and write about it.

But writers gotta write (and I'm a writer, sort of).  So I'm going to write about the wedding.  Finally! 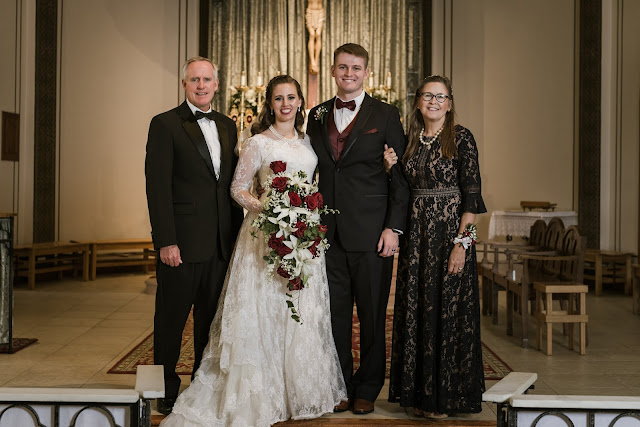 There is just nothing in the world like a Catholic wedding involving two extremely Faith-filled young people who promise to love, honor, and cherish each other all the days of their life, let me just begin by saying that.  It is a powerful and very moving thing to witness, that's all there is to it.  (Having a purse with tissues in it handy, close by in the pew, is a must for mothers of the groom, I've learned--at least for this mother of the groom.)  This nuptial Mass, during which our youngest son and the sweet girl he met on Catholic Match in 2016 (while he was stationed over in Germany) exchanged their vows in front of several hundred family members and friends, was exceptionally holy and beautiful.  Sacramental grace abounded.


For the wedding Mass, the bride wore a gorgeous lace gown that had been worn by both her mother and grandmother before her, and then she changed out of that fragile family heirloom into a more modern strapless gown for the reception afterward.  I love it when family wedding dresses are part of the tradition.  (All four of my Pearls sisters-in-law wore their mother's dress for their weddings.)  Our new daughter-in-law Babisiu could not have looked more regal and lovely. 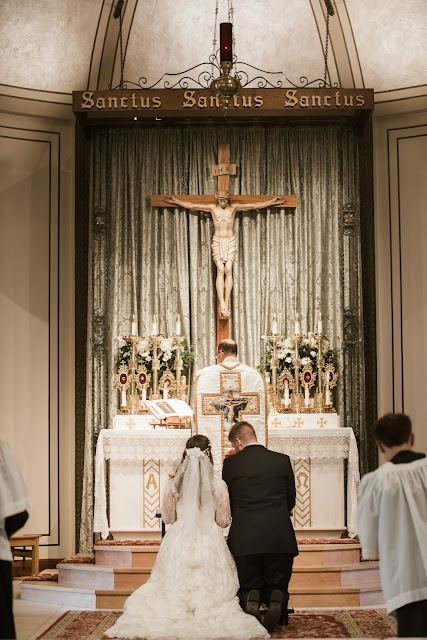 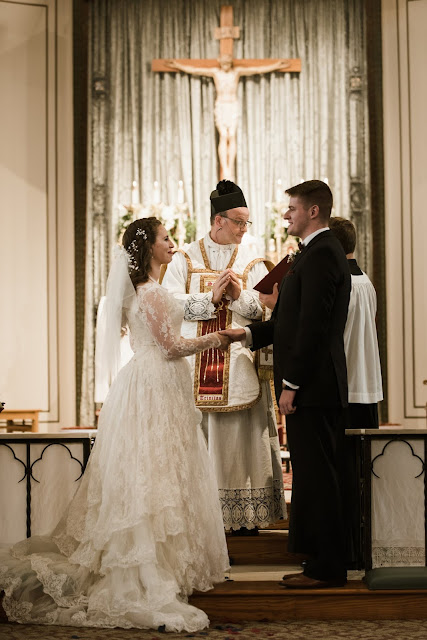 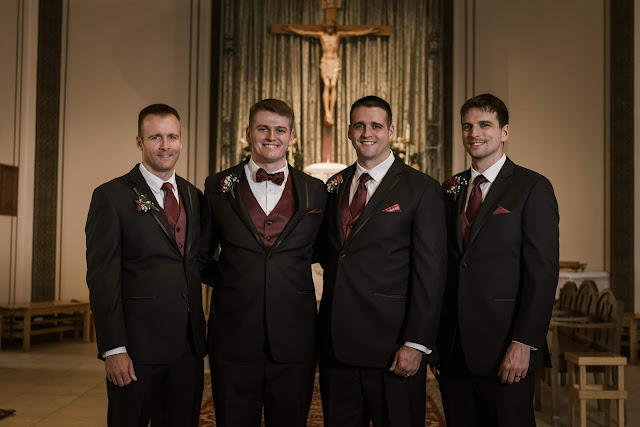 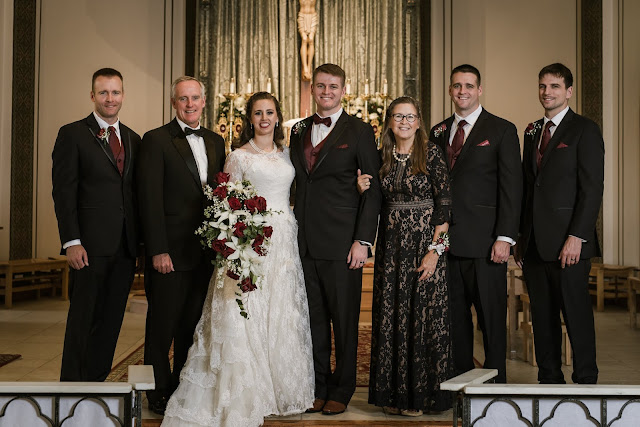 The bride's sister was the maid of honor and our oldest son was the best man--which was especially poignant, because he was also his baby brother's godfather over 26 years ago, even though he was not even 10 years old yet at the time. 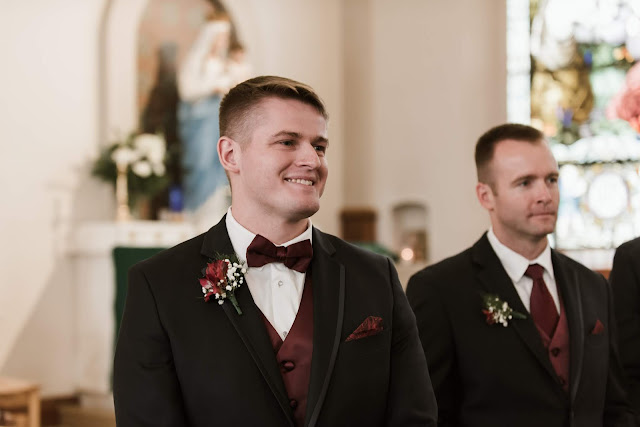 Our five oldest granddaughters were flower girls, along with one of the bride's young cousins (wearing lace-trimmed dresses I'd made); and G-Man, our oldest grandson, was the ring bearer.  I loved the inclusion of so many little people in the wedding party; I told my new daughter-in-law that it reminded me of a royal wedding! 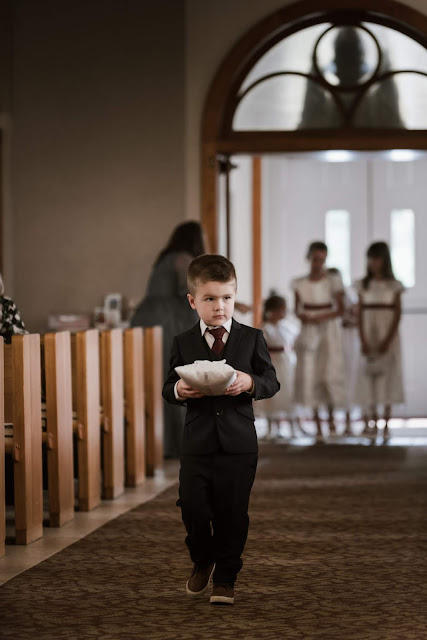 You know what?  I think now I'm just going to share a blog post written by someone else, one that appeared on the website of the wedding photographer.  Not only does it tell the charming story of how my son and his bride met online, but it includes many of the wonderful pictures taken on their wedding day by some exceptionally talented people at Meridian Photography. Most of the pictures are breathtakingly beautiful; and some, on the other hand, are downright hilarious.  (The couple's nod to the iconic painting by Grant Wood called "American Gothic" is especially fun.)   Just click here to see the post.

I can hardly believe that all five of our sons are now married (where did the years go?!), and all to young women who share their Faith and are determined to raise their children in the Catholic Church.  This was the one thing we wanted for them more than anything else, if they were called to the vocation of marriage; indeed, we spent many years praying for our sons' future wives.  And boy oh boy, were our prayers answered.  We have been inordinately blessed.   God is so good! 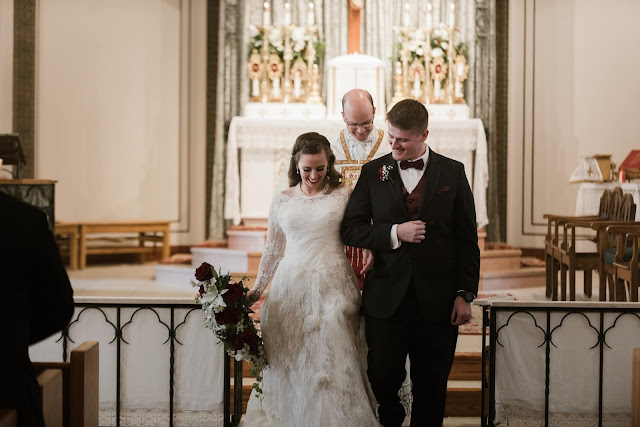 As if the day wasn't glorious enough already, next up was a fabulous party under a tent that was set up at the bride's family's ancestral farm, where her great-grandmother had celebrated her wedding decades earlier.  This bucolic rural location was filled with so much sentimental history for Babisiu and her family, and it also made an absolutely stunning backdrop for the festivities.

So there's more to come.  Stay tuned!
Posted by Laura Pearl at 3:35 PM