You guys...what is wrong with me?  I have so much to write about these days, as our family is expanding at breakneck speed and going through the most incredible transitions; but the last thing I can get myself to do lately is to sit down and write about it.  I've been almost afraid to go near our office here in VA, as roomy and cozy and efficient a space as it is, for fear that I will go on a writing bender and come out days later bug-eyed, bedraggled, and unshowered.

It could happen.  (I'm in my nightgown as I write this.  When I finish today, I'll let you know what time it is and whether or not I've managed to get bathed and dressed yet!)

About our office, though (which I intend to put on the new house tour, if I ever get THAT particular set of posts up and running again!): it is the greatest place imaginable to work!  I've always wanted such an office and my husband was adamant that our new house would have one--and not only that, but it would be outfitted with matching rolling chairs so we could work side-by-side at our desks.  (He says he wants me to be the happiest woman on earth.  And because of him, I am.) 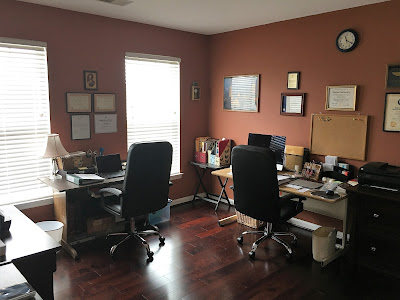 When I was a newbie blogger, I couldn't wait to open up my laptop every morning and get to it, before my first cup of coffee had even had a chance to grow cold.  (And that's back when I didn't even have a fancy office to work in and had to park myself at the dining room table, because the only office space we had was in a gloomy corner of the basement.)  I had dreamed of being a writer my whole life, since I was knee-high to a grasshopper, but had put that seemingly farfetched dream on the back burner during the years that I was raising my boys.  Some people can do both--take care of a home and a husband and kids and also be writers--but I knew instinctively that, at least for me, trying to do it all would be too hard.  Or at least that if I tried, I would end up feeling like I wasn't giving enough of myself to one job or the other.  So I waited until my youngest son was about to begin high school in 2007 and I had hours to myself during the school days to start writing my first novel; and then I waited until he was about to graduate from high school to start this blog.  (Good things happen to those who wait and all that, right?)

I've gone through arid patches with this blog in the past few years, where I've felt tapped-out and tired, thinking that I haven't got all that much to say anymore.  I've considered giving it up, even, at times; but I always come back to it.  I miss it too much when I'm away.  Blogging has been the most satisfying outlet for me.  The writing in and of itself brings me a lot of joy; but then add to that the many blessings I've received over the years--especially the online friends I've had the privilege to meet--and well...I can only say good things about my years in the blogging world.

Okay then, the last time I was here (just under a month ago!  Wow, has it been that long?), my fourth son and his wife had welcomed triplets into the world.  So many of you kind readers have probably been hoping for updates.  But like I said before, I am not one to do many things at the same time and do them well.  And while I've been busy trying to be the best Mom and Grammy I can be to so many people whom I love, I just haven't felt capable of being much of a writer.  (When this blog goes through dry spells, though, you can catch up with my family's news on Instagram, if you so desire.  I've been posting there rather than blogging--and I can see why so many formerly prolific bloggers whom I used to follow have taken to doing the same.)

Time for a writing break, as I just learned that my husband has scheduled a 10:00 appointment with someone who is trying to sell us mortgage insurance for our new house.  (And I thought he wanted to make me the happiest woman on earth!  I'll have to tell him that interrupting my writing to make me listen to someone talk about mortgage insurance is not the way to go about that.)  I may not have time to shower, but I have to at least get out of my nightgown and into some clothes.  And hopefully, I'll be back later to finish this up!

In the meantime, here's a recent picture of the triplets with their mom and dad.  All three babies will be home as of tomorrow!  They have been thriving and gaining weight like a trio of NICU champions.  The little girl (for whom I must come up with a blog handle) went home after a mere 23 days; the boys (who will also get blog names eventually) will join her one day shy of a month since their birth.  God has been so good to this sweet little family. 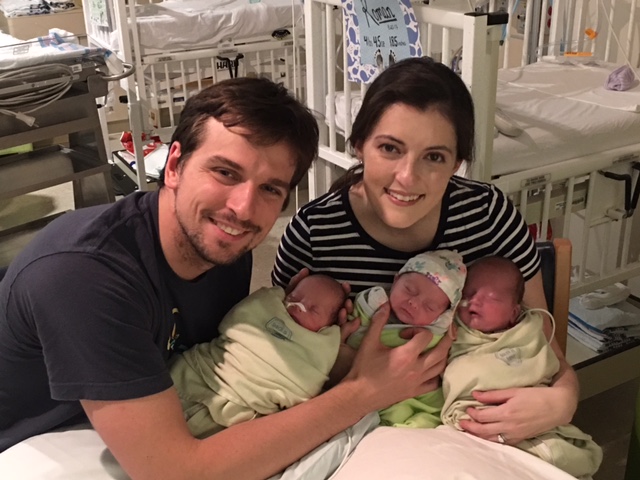 P.S. One last thing: please pray for my baby sister, who has been flat on her back in excruciating pain for weeks, and is having surgery on a herniated disc this morning--that the procedure is a success and she finally gets some relief!
Posted by Laura Pearl at 10:07 AM