The Triplets Are Here!

I have  big news!  About little people!

Last night, son #4 and his wife welcomed their triplets into the world!  Mom and babies are doing well so far!  As of yesterday, Braveheart had made it to exactly the 32-week mark, which was the goal her OB/GYN had for her at the outset.  And yesterday the contractions started, right on schedule.  (Already, those grandchildren of mine are proving to be very obedient, very much rule followers.  And smart, too; they must have realized that even the day before would have been too soon, so they waited until all was just right!)

My husband and I were not there in VA when all this was happening--we're in NY right now.  But last night, one of my other VA daughters-in-law, Preciosa, took a photo of one of the triplets being transferred from the delivery room to the NICU.  She got off the elevator and saw this medical team, and she excitedly asked them, "Is that a Pearl baby?!"  And it was! 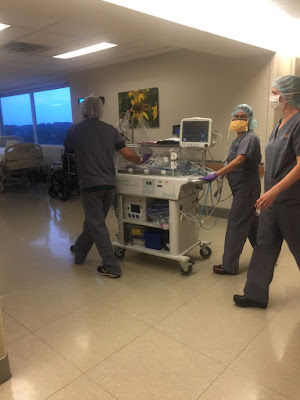 The babies were delivered by C-section.  The first one out was the larger of the two boys, Baby A, who weighed in at 4.277 lbs. (18.25 inches).  He was born at 7:30 p.m. The second and third babies were both born a minute later: first, the only girl, Baby B, who weighed in at 4.211 lbs. (17.5 inches); and then the smallest of the bunch, Baby C, a boy who weighed in at 3.02 lbs. (16.2 inches).  That third-born triplet was the one the doctors were initially worried about making it at all, because at the beginning he wasn't growing; early on, they had prepared our son and his wife for losing him in the womb (in what they call "vanishing twin" syndrome, I believe).  But the little guy proved what a fighter he is by surprising everyone and growing like a weed.  So many people were praying for those babies, and indeed prayers have been answered tenfold.

My daughter-in-law is something else, I'll tell you.  She has looked glowing and happy throughout this pregnancy, suffering absolutely no morning sickness at all; and this is how the new mother looked not long after the C-section: 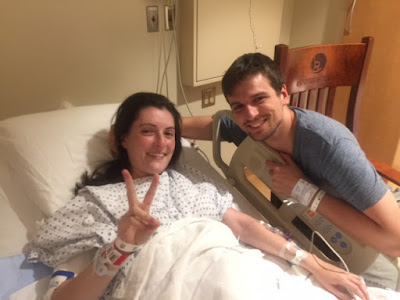 Don't these two wonderful kids look happy?!?!?  I love them so much.  And I know I'm going to love those tiny babies.

I have pictures of the triplets, but until I find out how their mommy and daddy feel about having them on social media, I'm not going to share them.  Suffice it to say that they are three of the eleven (so far) cutest babies you've ever seen in your life.  (And in November, that number will jump to twelve.)

And now it's time to pack, because guess where I'm headed?

I am a lifelong Catholic, happily married to my high school sweetheart, with whom I raised five now grown-up sons. I am thrilled to be a wife, a mother, a "Grammy" (to 14 and counting!), and an author of two Catholic novels. My blessings outnumber the shamrocks in Ireland, 'tis true. And I'm just so glad you stopped by. (Click on the picture and it'll take you to my other blog.)