Here's my husband with our boys in 1993, playing the role he lived for, sacrificed for, and loved: being a dad.

When our boys were growing up, he used to say that if a parent tries to be his kids' friend during their formative years (those all-important years when along with the love, they need healthy doses of guidance and discipline), then more often than not, it's difficult to be friends after they've grown up.  Parenthood is not supposed to be a popularity contest, he would say (a notion learned from his own excellent father).  And he was totally on board with that. His goal was not to be popular with his sons (not all the time, anyway, because he had to be tough on them when the situation warranted it); his goal was to raise fine upstanding men: men of character; men with their Faith and morals intact. His goal was to raise future saints. 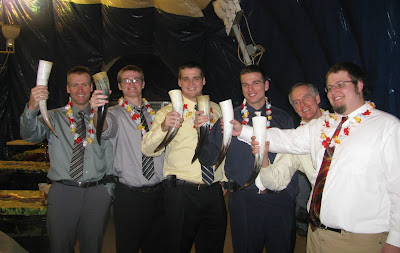 Here's my husband with our boys in December of 2009, at the rehearsal dinner the night before our firstborn's wedding.  These boys men will always be my husband's sons first; but as you can see from this picture, they are now also his friends.

And I'll drink to that!
I'm not only drinking up here (figuratively speaking, anyway), but I'm linking up as well--joining Cari at Clan Donaldson for a round of toasts to dads!
Posted by Laura Pearl at 8:30 AM