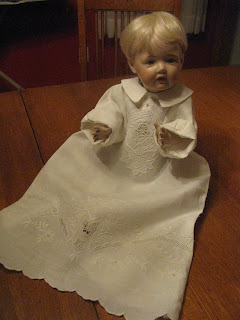 On March 8, I blogged about trying to make christening dresses for the twin babies my son and his wife are expecting. I had discovered a box of white linen pillow shams, with cutwork and embroidery on them, that had belonged to my late mother-in-law, and my plan was to take them apart and (hopefully) figure out how to turn them into dresses.

I ended up making two of them in one style and then I thought it might be too long and voluminous if the babies were preemie-sized; so I made two more in another simpler, shorter style. 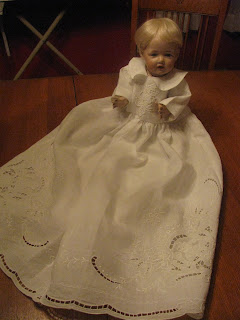 resses. I think she looks sweet in them.

Making christening dresses out of pillow shams is exactly the sort of project my mother-in-law would enjoy and appreciate. I miss her and wish I could show them to her!
Posted by Laura Pearl at 10:38 PM