Most of the fun blogs I read have an "About" page, so you can get to know the women behind them.  I thought it was about time I had one of those, too, to introduce you to my family and me--especially if you're new to String of Pearls.

I started this blog in March of 2011, when the youngest of my five sons was about to graduate from high school.  I knew little to nothing about blogging at the time, but was encouraged to take the plunge by my oldest son's wife (more about her, and the other daughters-in-law who have been added to the family in the intervening years, in a bit).  I was thrilled to see that I could go on the Blogger website, pick out a template, and just start writing and publishing.

I have only updated the look of my blog once, as far as the background design; but I've changed the banner across the top numerous times, using different pictures of my sons.  I tried to make a recent photo of our growing clan work as a banner, during my latest attempt to jazz things up; but I couldn't get it to fit the way I wanted it to.  And I just don't think I'm ready to spend money on a professionally designed blog page.  But here's that image of my precious "String of Pearls" that I would have used, if I could have made it stretch all the way across the top without cutting anyone off. 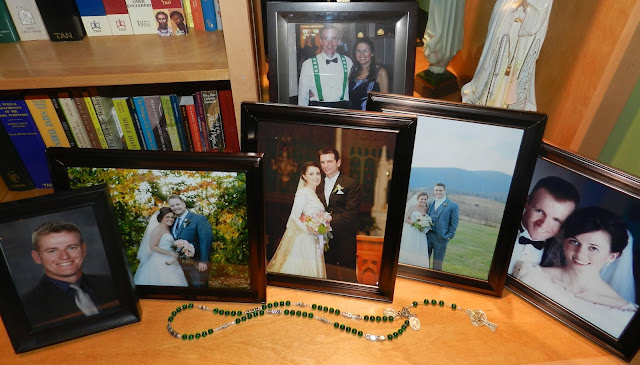 Anyhoo, I've decided to go the simple route and just have the title up there.  (I'm open to your suggestions, if you think my site looks too plain!)

My husband and I attended the same Catholic high school in Plattsburgh, NY, and we started dating the summer after our freshman year, when we were both 15.  This photo of us was taken at the junior prom in 1975. 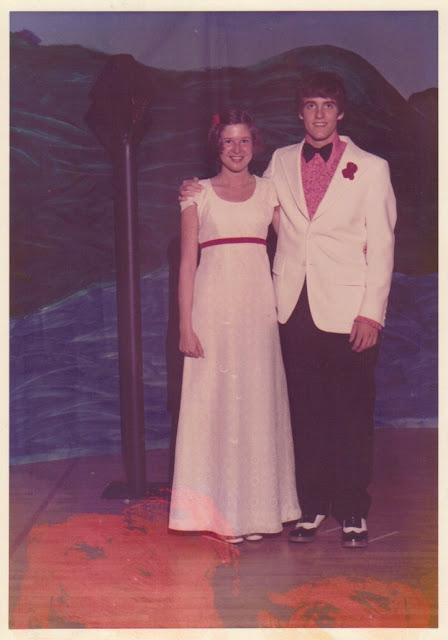 Yes, we are very young here, and very fashion-challenged.  If you've stopped laughing, we can move on now.

We went off to college (the University of Notre Dame in South Bend, IN for him, the College of the Holy Cross in Worcester, MA for me), with the idea that we wouldn't "hold each other back" if we were meant to find someone else; but we made the long-distance relationship work and just grew closer over the years we spent apart.

We graduated in May of 1980 and got married that December. 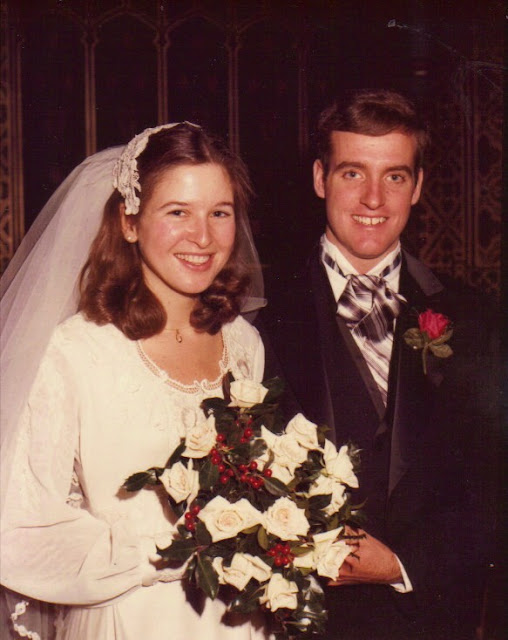 When we started out our married life, my husband was an officer in the US Navy and a flight school student, and he went on to fly A-7's and F-18's.  Off aircraft carriers.  Yes, he was that cool. 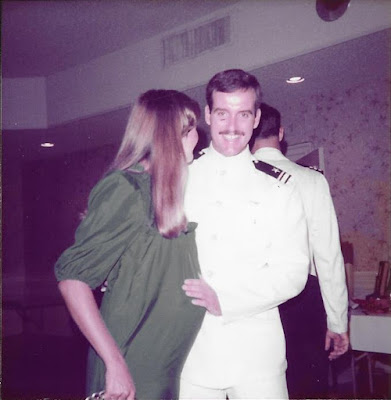 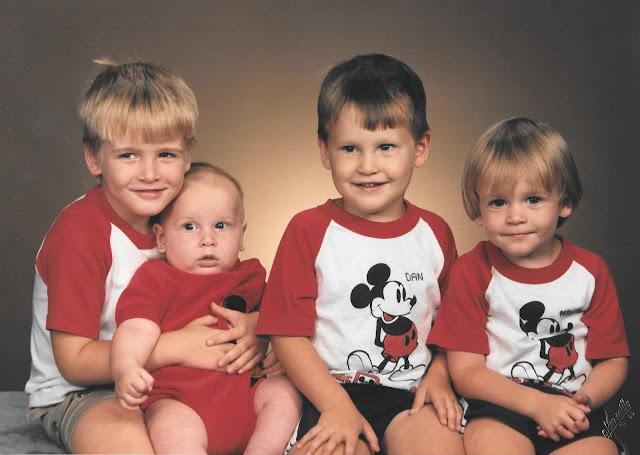 And just when we thought our family might be complete, we were blessed with son #5 in 1993. 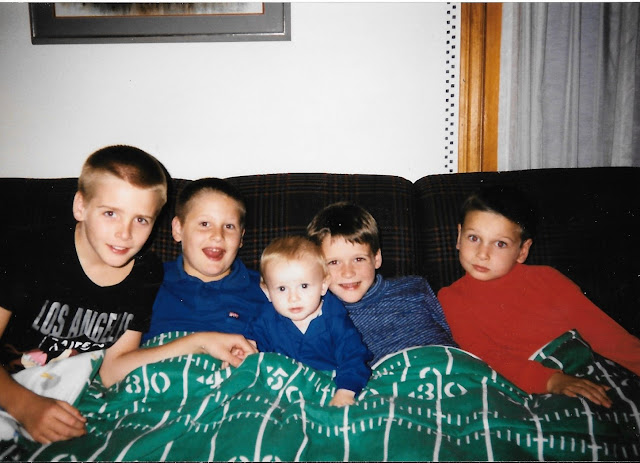 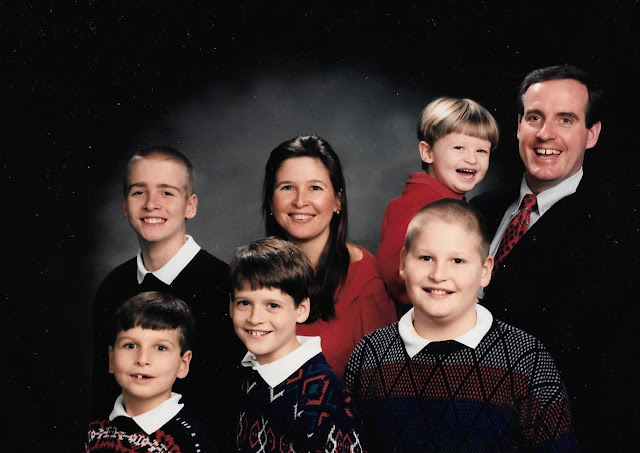 We moved to Dover, NH when our oldest son was half-way through kindergarten, and this is where we raised our brood.  They all attended the same Catholic grade school (except for #5, who left there after 3rd grade and was homeschooled from 4th grade through 8th grade), and they graduated from the same Catholic high school--where they all excelled at academics, football and lacrosse, and being the sweetest sons a mom could ever ask for.
These are my boys! 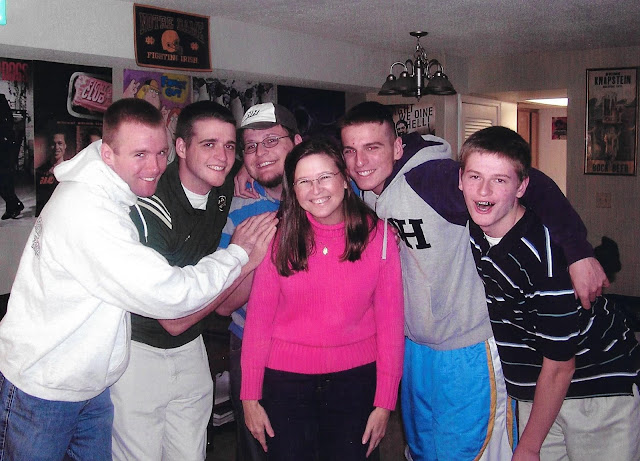 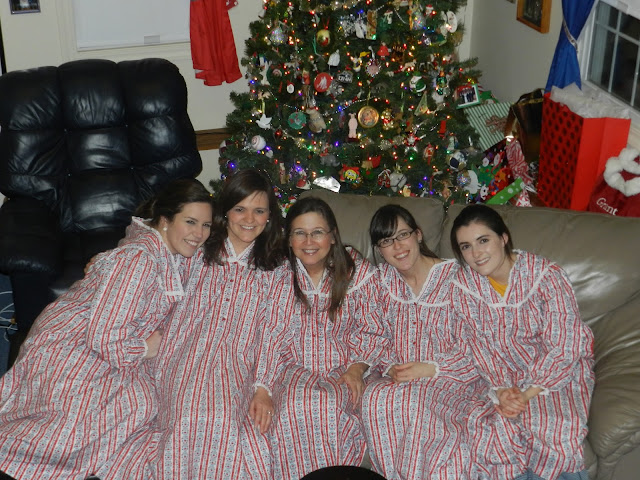 ﻿
I have given our precious grandchildren (five of them now--and counting!) aliases at String of Pearls as well, to protect their privacy.  (And at the request of our firstborn and his wife, I don't publish pictures of their daughters unless they are from the side or back, to further respect their wish to keep their lives out of the public view.)
After decades as a happy SAHM, I decided to fulfill a childhood dream.  When son #5 started high school in 2007, I began writing a novel that I never thought I'd actually see in print.  Finding Grace was published in 2012.  Then pinch me, I must be dreaming--a second novel, Erin's Ring, was published in 2014.
I am truly an empty-nester these days, with the graduation of our baby from the University of Notre Dame just a few weeks ago.  I enjoy traveling with my husband to visit our kids and grandkids, which is made easier by the fact that his airline job affords us non-revenue stand-by tickets to anywhere we need to go.
I love my Catholic Faith, Notre Dame and the Fighting Irish, drinking coffee, eating chocolate, reading good novels, writing (this blog, and Catholic fiction aimed at young adults and adults), sewing (especially dresses for my granddaughters), drawing and painting, spending time with my beloved sons and their families, being a "Grammy," and being the wife of the greatest guy on earth. 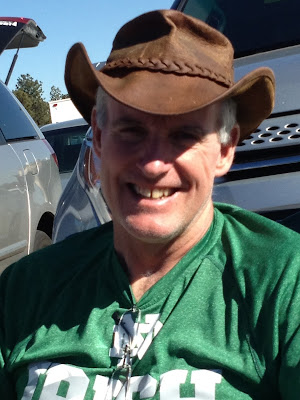 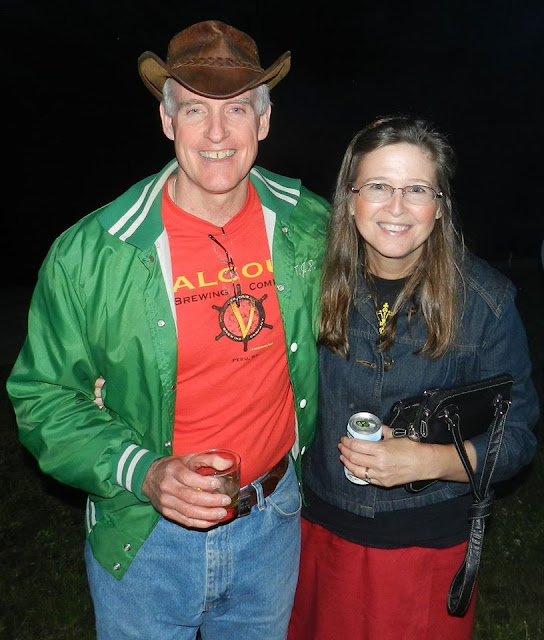 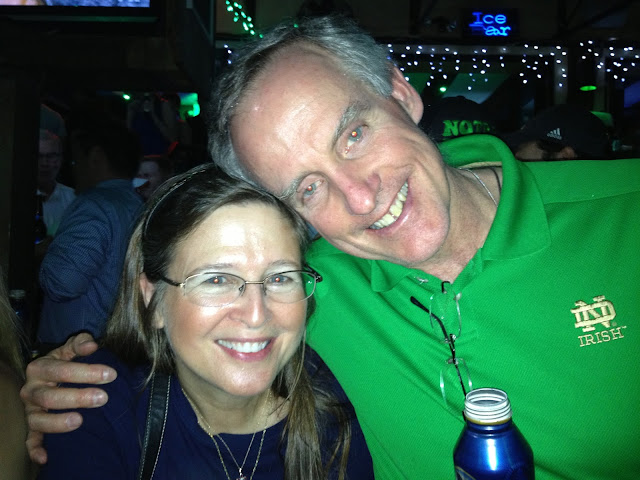 I am inordinately blessed, and don't I know it!  And I guess that's about all there is to tell you...so, as they say, "that's all she wrote"!
Posted by Laura Pearl at 11:47 AM

Email ThisBlogThis!Share to TwitterShare to FacebookShare to Pinterest
Labels: About