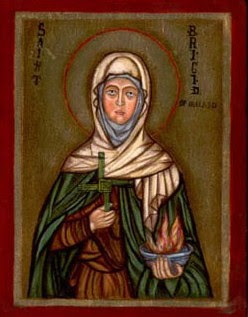 Today is February 29, "Leap Day," which is an extra day added during a Leap Year. Every four years is a Leap Year in our modern Gregorian calendar, and so in 2012 there are 366 days instead of the usual 365.

Now I'm going to play Bill Nye the Science Guy and explain that the earth actually turns roughly 365 and a quarter times on its axis, not just 365 times, by the time it has completed a full year's orbit around the sun. So that means that periodically, the calendar has to catch up. Thus, the invention of Leap Years.

There is an interesting 5th century Irish legend regarding Leap Day. The story goes that St. Brigid (or Bridget) complained to St. Patrick about how unfair it was for women to have to wait so long for a man to propose. So St. Patrick struck a deal with her and said that on this one day in February during Leap Year, females could be the ones to propose. I suppose the point was to balance the traditional roles of men and women, just as Leap Day balances the calendar; but I'd call putting that gutsy role-reversal into practice taking a giant leap of faith. Men who refused such a proposal (I'd call that saying "you can go take a flying leap") on Leap Day, also known as "Bachelor's Day," had to pay a penalty.

There are records of the practice in 13th century Scotland as well. Women were allowed to propose marriage to the man of their choice on Leap Day, and it was actually made law that any man who declined such a proposal must pay a fine--it could be simply a kiss, or payment for a pair of gloves or a silk gown. (Do you suppose that some gals might have proposed to guys they knew would turn them down just to get themselves fancy new frocks?)

I'm surprised that St. Brigid pushed for such a thing, actually, because I think even in our modern world, women--even those who call themselves feminists--like the idea of the man being the one who's down on one knee, with a diamond ring in his hand. I admit that I'm an old-fashioned girl and I like the traditional way. What do you think? Should marriage proposals come from ring-bearing men on bended knees, or should women be allowed (that's the wrong word to use in this day and age, but you know what I mean) to do the asking?

It just occurred to me that if only I'd been born on a Leap Day, I'd be going on 14 right now instead of going on 54. But I guess it doesn't really work that way, does it? Ah, well. We won't have another day like this until 2016--so until then, Happy Leap Day!
Posted by Laura Pearl at 7:29 AM