They're Just Takin' Care of Business 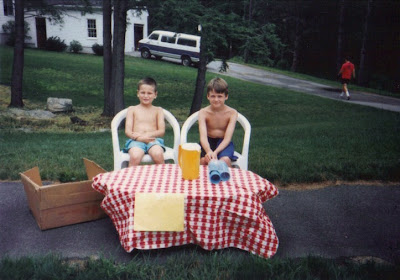 If I wanted to be topical with this blog, I'd talk about Hurricane Irene today, the effects of which we should be feeling here in New England by this afternoon (it's already raining cats and dogs out there); but I just don't feel like talking about the weather. I know, I know: I promised yesterday that I wouldn't obsess about my children and use this blogsite solely for the purpose of posting nostalgia-inducing pictures from their early childhood days. Remember, though: I promised that with fingers crossed...and I just became a true empty-nester, so I think I deserve a little latitude here. It's a tough adjustment to make for someone whose whole identity has been tied up with being a mom for the past 28 years! I think when you look at this little gem of a snapshot, though, you'll forgive me. It's just too cute for words, in my opinion. And I know that just about every apple pie-eating, flag-waving, all-American child has set up a lemonade stand in front of his house at least once in is lifetime. But this lemonade stand is special, you see; it's special because it's my two adorable little businessmen who are running it.

That's my #4 son (now 23) on the left and my #3 son (now 25) on the right. This lemonade stand was son #3's brainchild, of course, because he was the one who was always so interested in money. He liked to earn it, to count it, to spend it; he always insisted on being the banker for epic family games of "Life" and "Monopoly." He became a math whiz before he ever started kindergarten because he became so adept at making change during those board games! My fourth son wasn't the one who came up with the "get rich quick" schemes (and don't laugh--those dimes really added up!); but he was always game for being a partner in his older brother's business endeavors. It should come as no surprise that my third son majored in finance in college--my husband and I predicted he would go into business when he was about four years old!

The funny thing is, these two childhood business partners haven't strayed all that far from the old lemonade stand, figuratively speaking. They remain extremely close to this day. They are actually both working now in the civilian contracting business down in VA (which is just a tad more lucrative than the lemonade selling business). They not only work in similar jobs that utilize their Army Military Intelligence training; they even work in the same building, though on different floors. They drill as Reservists at the same Army base. And just as they shared a bedroom growing up, they share a condo now, along with their cousin's boyfriend. Some things, thankfully, never really change!
Posted by Laura Pearl at 5:59 AM