Now This is Inspiring 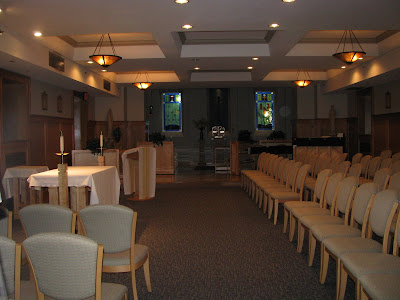 In yesterday's post, I talked about my son's new home, his all-male dorm on the most amazing Catholic college campus in the world (is that hyperbole? I think not). I mentioned that each and every dorm has its own chapel, but I forgot to add that each men's dorm also has its own live-in rector, a priest who says Mass in that chapel every Sunday night. (The women's dorms have chapels as well, but rather than priests living in their halls they have female rectresses, and priests come in on Sundays to say Mass for their residents.)

I'm going to quote Rudy's dad here (from that scene in the movie "Rudy" when he enters the Notre Dame football stadium for the first time in his life); because when I opened the door to this chapel, which is on the first floor of my son's dorm and just around the corner from his room, here's what I thought: this is the most beautiful sight these eyes have ever seen!! Okay, that might count as hyperbole, because I've said that a lot in my life--most recently upon meeting my first grandchildren, beautiful identical twin baby girls, for the first time; but I do think this little chapel is quite an inspiring sight to see. It warms my heart to picture my son and other fine young men from his dorm gathered here for the Holy Sacrifice of the Mass. And I know from experience that going to Mass together in their dorm chapels is one of the many ways that the kids who go to this school become a tight-knit group within their dorms--they become almost like a family.
Posted by Laura Pearl at 9:22 AM