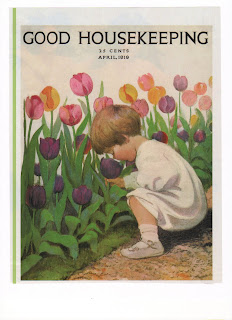 Well, I've decided to stop blogging. It's much too addictive, and it's taking me away from other things I ought to be doing. I'll miss it, but I think it's best if I just quit cold turkey.

I'm just joking, because I don't think I can stop blogging! It's too much fun. If I'm still at it this time next year, I should give it up as my Lenten sacrifice, because that would be even tougher than giving up Diet Pepsi!

On another note, it may be April, but there are no tulips blooming here today. In fact, we are being hammered by a major snowstorm (and that is not an April Fool's joke!). The tree branches are so weighed down already that they're drooping, and the forecast calls for snow to continue falling all day long. Later, it's supposed to get windy, so we may lose power. There's no school today, as you might have guessed; and my son's season-opening lacrosse jamboree, scheduled for tomorrow, will most likely be cancelled, too.

As I've said before, you gotta love springtime in New England!