Yesterday after Mass, my husband and I went to Sam's Club to stock up on some of the items we usually buy in bulk--K-cups for one, as I did NOT give up coffee for Lent (because I am a weak human and I cannot imagine going 4 days without it, much less 40).

The ashes our pastor anointed us with had been mixed with a generous amount of oil, I believe; they went on wet and dried crusty, and they did not fade or wear off one bit during the day.  We both had to scrub them off with soap and water before going to bed last night.  So our ashen crosses were very clearly visible when we went on that shopping trip.

Anyway, there we were, proudly wearing our Catholicism on our faces as we went up and down the aisles (for once not sidetracked by all the tempting sweet and salty snacks and treats we usually find in our cart at checkout time, because LENT).  I actually love Ash Wednesday for that reason: everywhere you go that day, people know at least one thing about you for sure when they see that mark on your forehead: they know you are a Catholic.  They know you are a Catholic and you're not afraid to show it.

I thought we were the only people so marked with ashes in the whole warehouse, but for the most part I didn't feel like we were on the receiving end of too many questioning stares.  Then suddenly we met up with a man coming our way down the aisle, wearing that familiar black cross on his forehead, and he absolutely beamed at us.  He wanted to chat, to know which church we'd gone to for Mass. He was so obviously thrilled to bump into a fellow believer.

This random interaction with a stranger yesterday made me realize how blessed we are to be part of this world-wide Body of Christ: to be trying with all our might to follow in His footsteps, in a world that tells us our beliefs no longer apply to the modern age; and knowing that we are not alone, even when it can often feel like it.  We may not make as much noise as the radical, sometimes violent, revolutionaries at home and abroad who are trying to eradicate all traces of God and His followers, but we are everywhere.  Running into a fellow Catholic in Sam's was a reminder that there are millions and millions of us, all over the world.

I hope that Catholics in America will always be able to wear their Faith visibly, to wander the aisles of Sam's with Ash Wednesday crosses on their foreheads, without being attacked either verbally or physically.  In some countries, our Christian brothers and sisters are being persecuted and even killed for their beliefs.  Thank God and all His angels that so far, we can practice our Faith openly and in peace in the United States.  We must pray that the religious freedom promised to us in our Constitution will survive what might be coming--and I'm not going to get political here, because I don't want to use this blog that way...but there are scary ideas afoot, and they are taking hold.  I just have to keep reminding myself that Our Lady warned us at Fatima that Russia would rise up and spread her errors throughout the world, and that various nations would be annihilated; but She also promised us that in the end, Her Immaculate Heart would triumph. (However, it will take lots and lots of ROSARIES!)  So we must do what we can, but not give in to despair. 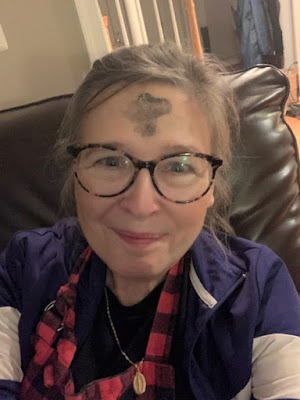