I Just Pray That God is Pleased with My Books; If So, Then So Am I

I received an email recently that I've been expecting, but it kind of broke my heart a little bit nonetheless.  The publisher of my two novels, Cheryl Dickow at Bezalel Books, informed me that Erin's Ring had only sold 9 copies this past year (and it has hardly been a bestseller at any time since its publication in 2014), and therefore she could no longer afford to make it available for distribution.  I know it broke her heart a little, too, because she'd had such high hopes for this book.  She pictured it being used in Catholic school classrooms and homeschool programs, as a part of the history, reading, or religion curriculum.  But despite the fact that it received two Book Awards from the Catholic Press Association in 2015, my sweet little historical novel filled with endearing Irish immigrant characters just couldn't find its audience.  What this means for Erin's Ring is that once they run out of the stock they have on hand, Amazon and other booksellers will no longer have new copies of the paperback available on their sites--although they offer used copies for sale from other sellers, in varying conditions at varying prices. 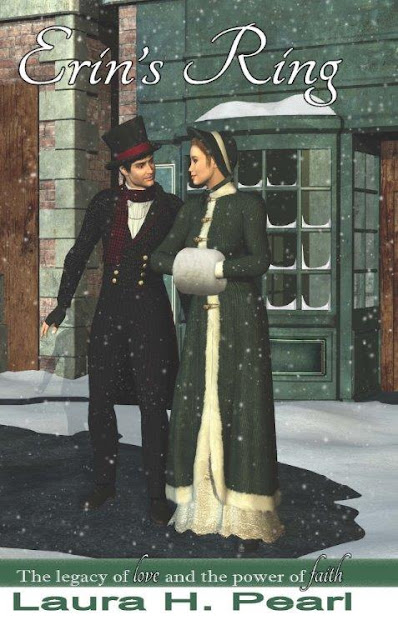 A year or two ago, Cheryl had to drop my first novel, Finding Grace (published in 2012), from distribution for the same reason.  The good thing about this book, however, is that unlike Erin's Ring it is also available in the Kindle format.  But otherwise, henceforth only used paperback copies will be found on the Amazon site. 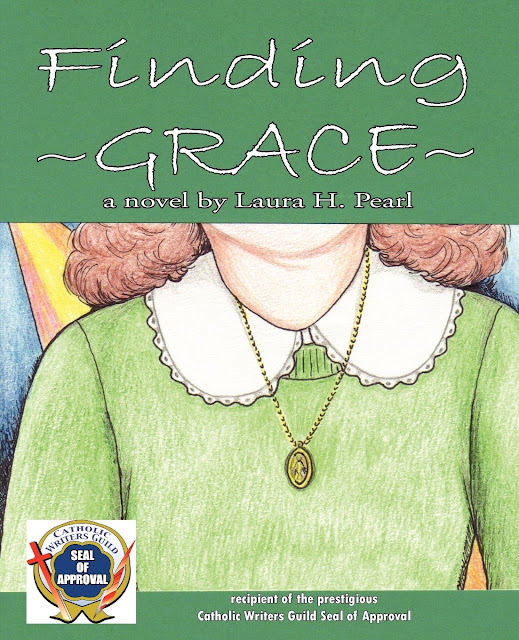 Okay, that is just extremely dramatic!  And seriously, how can I be sad about the way things turned out when I had the opportunity to do what I love--to write fictional stories that showcase the beauty and truth of the Catholic Faith, of married love, of strong family bonds, and of openness to life--and not only that, to fulfill a girlhood dream of being a published author?  I always thought that was an unreachable goal for me, and it happened.  How blessed am I?  My husband used to joke--years before I ever got around to starting work on Finding Grace, after decades of being a SAHM--that I would one day write a blockbuster book that made me a millionaire, and he could retire early and be supported by my earnings in old age.  Ha!  He's 61 and 1/2 now, and mandatory retirement in his line of work is 65.  So with this latest email from my publisher, I would say that his dream will not be coming true!

God has a plan for all of us; and even though I question Him sometimes, I know this to be true and I trust that He knows what I need to get to Heaven a lot better than I do.  If my books were meant to sell like hotcakes, they would have.  (I've told this story before here at the blog, and if you are a longtime follower, forgive me for the repetition: my husband, who makes me laugh every day, would always say, "But they're selling like lukewarm cakes.")

Early on, I was somewhat involved in the world of Catholic authorship.  My husband and I attended a Catholic Writers Guild/Catholic Marketing Network conference in NJ in August of 2013, and Finding Grace was a finalist for a Catholic Arts and Letters Award that year. 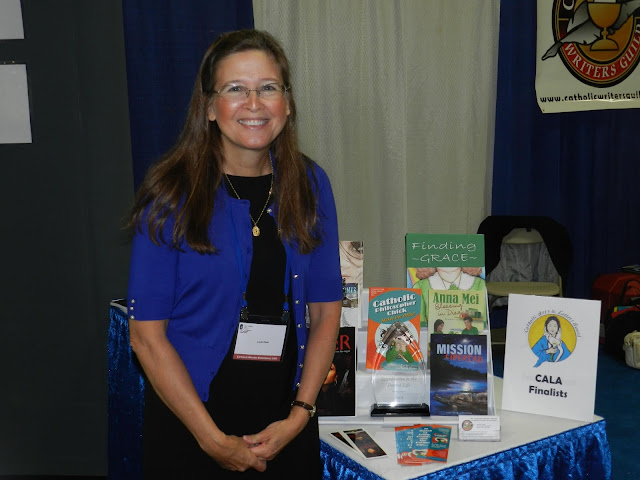 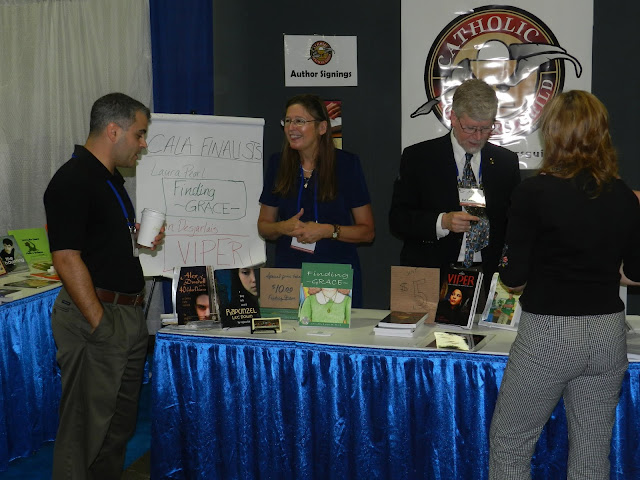 I even stepped way (way,WAY) outside of my comfort zone at that conference and did a short interview with EWTN when they stopped by the CWG booth! 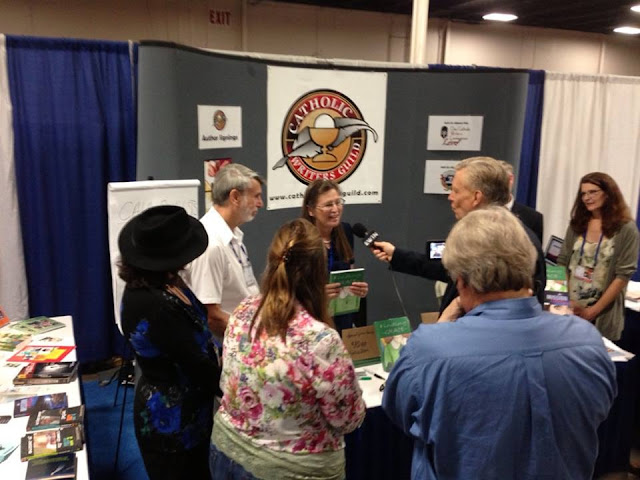 Wow, looking at these photos for the first time in years, it seems like a whole lifetime ago.  And truly, it was.  Not too long after this conference, we had a whirlwind 11-month stretch during which three of our sons got married.  And in the summer of 2013, I only had three young grandchildren; but before long, our sons' families would start to multiply at breakneck speed, and this Grammy's life would become more and more about traveling afar to see them and less and less about traveling afar to do author-type things.

But I would not trade the full and busy family life I have now, with all five sons happily married and at last count, 16 grandchildren--all of whom live within an hour of their Papa and me!--for all the tea in China (or all the 5-star reviews and massive book sales in the world).

So I am not a bestselling author.  But I am an author.  And what's most important of all to me is that I believe God is pleased that I used whatever talents He gave me to give glory to Him--or at least I hope and pray He is pleased.  The fact that these two books didn't succeed in the eyes of the world is not the measure of their worth.  Even as I sit here, feeling a bit down about the fact that my books will not be as easily available to the young souls who might be inspired and edified by their messages (which are in direct opposition to the messages with which they are being bombarded by our increasingly secular-humanistic world), I realize that they were published for a reason, and if just one reader was meant to find them, he or she will (or has).

Luckily, I will still be able to order author copies of my books for myself, to give as gifts or to sell here at the blog.  These author copies are considerably more expensive than they used to be, so I can't offer the same lower prices that Amazon could, or that I used to.  But if you're interested in either book, there are yellow "Buy Now" buttons on the sidebar at the right on my home page under the images of the book covers.  If you click on one of those buttons, you will get to a PayPal page and can make your purchase there.

I am offering signed copies of my books here at String of Pearls, for the following prices (which include shipping and handling):

I'm thinking that maybe with the holidays approaching, I'll run a little blog book giveaway.  What do you think?  I could offer one of the novels...or I could offer a copy of My Little ABC Book (a labor of love for my family which was never expected to be a commercially successful project!). 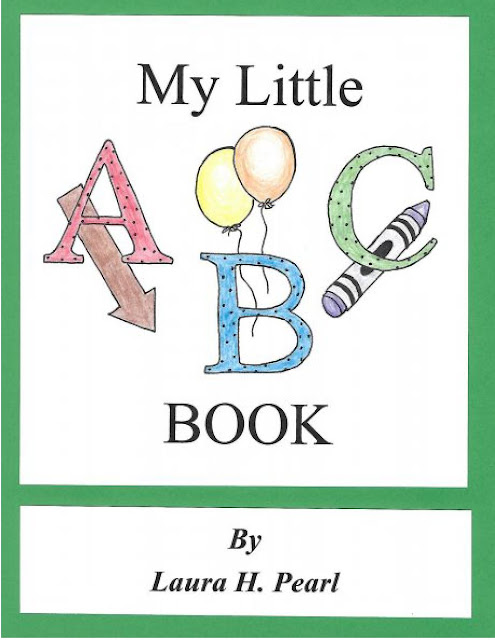 Which of these three books should be the giveaway item?  If you have any preferences, let me know in the comments.

I don't know if I'll ever write another book...but I'm glad I'll always have this little space on the Internet to come to when the writing bug hits.  God bless you for stopping by!
Posted by Laura Pearl at 11:42 AM