X and Y Page: It's Been a Process!

Warning: ABC Book update coming at you.  (That's right, the ABC Book that was going to be a Christmas gift for the grandchildren this year...but is still several pages shy of completion.  Yep, that ABC Book.)

I have been working on the X and Y page for this book (a love gift for my grandchildren) for a while now.  That's right, I said "page," not "pages."  It's just one page for the two letters, and you'd think that would mean getting it done would be a piece of cake.  Here I thought that devoting just one page to two letters (instead of two whole pages of illustrations for each letter, as I did throughout the book until I got to X, Y, and Z and decided it was time to wrap things up already!) was going to make things move along pretty quickly.

I printed up my cardstock page and began working on the drawing of the yak...and to my horror, part-way in I realized that I had forgotten to highlight the featured words in the colors that coordinate with those of their letters.  Horrors! 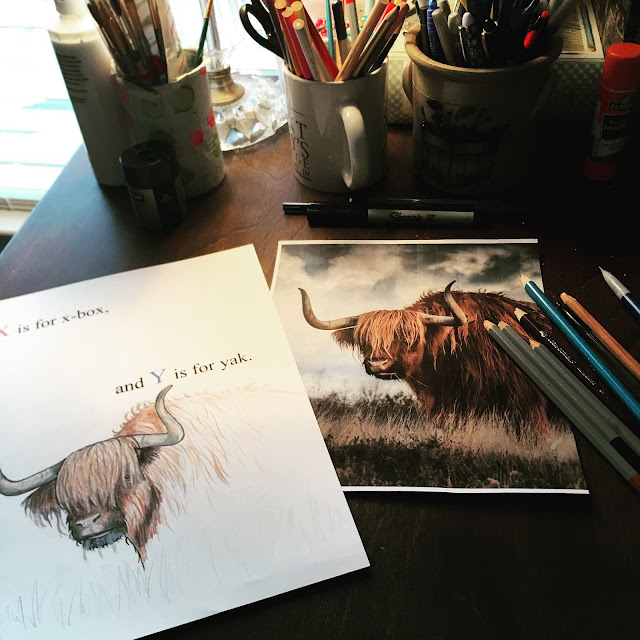 The word "yak" needed to be blue, and the word "x-box" needed to be red.  So it was back to the old drawing board for me.  Literally.

I used the fact that I was going to have to start over as an opportunity to incorporate a Y adjective into the page, and I decided that the yak was now going to be yellow.  (Yes, yellow!)  I also realized that I had misspelled the word "x-box."  Since this is a real product, I knew I had to spell it properly and changed it to "Xbox."  (That would lead to a whole new headache, but I'll get to that in a minute.)

So I was practically finished with the page, and it looked like this. And then my heart kind of dropped.  Because I realized that I can't use an image of a trademarked video game system if I plan to try to sell this ABC Book.  Not that I think I should do that, or that anyone would really buy it if I did.  But I have had several kind readers, both here and over on Instagram, comment that when I finish, they would like to buy a copy.  Whether or not that would ever really come to pass, I don't know.  But if it does, I can't have an Xbox on this page and risk a legal problem over using a well-known trademarked product in my humble little book.  (I don't know what I was thinking!)

I simply could not get myself motivated to start fresh on yet another image of the hairy horned beast!  So instead, I decided to cut away the yak portion of the now-defunct page and glue it to a new one.  And this time instead of an Xbox, I decided to use that familiar ABC book stand-by for the letter X, the x-ray. 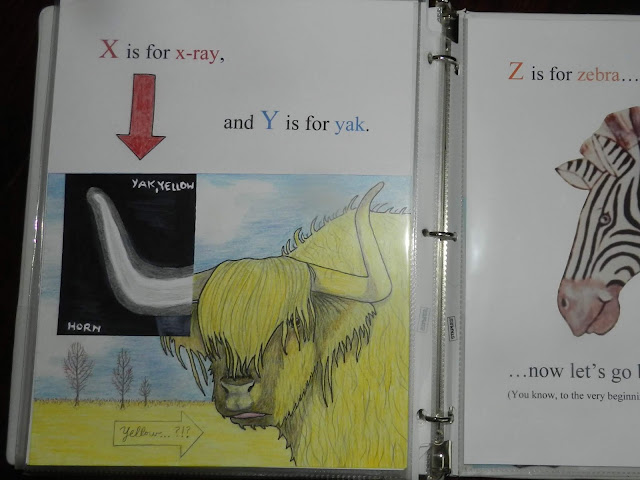 So what do you think?  Does the yellow yak (with the X-rayed horn) work?  Yea or Nay?

Even if your vote is Nay, I don't think I can possibly bring myself to do another version of this page.  Because Yikes, I'm eXhausted!

Happy New Year's Eve!  I will be sure to toast all of you fine readers when my husband and I have our typical wild New Year's Eve celebration...in jammies, at home, by the fire, with a movie on the TV...
Posted by Laura Pearl at 10:13 AM