I’d like you to meet Michael.  He’s one of my heroes. 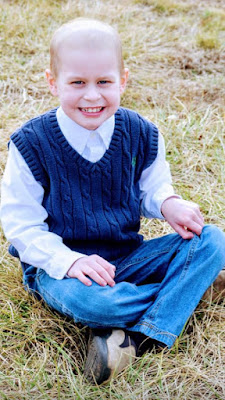 Michael is the nephew of my second-born son’s wife, the third-born of her sister's six children. He just turned nine years old and I am going on sixty; but believe me when I say that when I grow up, I want to be just like him.  When you hear his story, you will undoubtedly feel the same way.

T-shirts were made for Michael's friends and family to wear in support while he fights the toughest battle of his young life against a bitter foe, a disease that has ravaged his body but not his spirit.  The shirts have this logo on the front: #MICHAELSTRONG 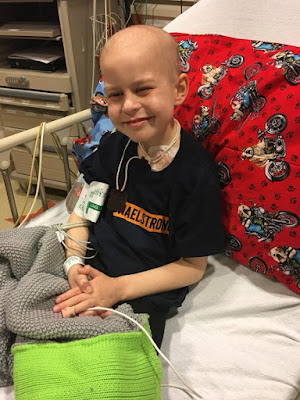 And oh, is he ever strong!  His poor body has been through the wringer ever since he was diagnosed with an aggressive form of cancer, T-cell leukemia, in March of 2017.  He's gone through a series of intense chemo treatments with their merciless and horrendous side effects, treatments that would test the spirit of a person of any age.  He's been in the hospital countless times, enduring a level of pain and suffering that is impossible to imagine or describe.  All he wants is to be a regular kid: living at home with his parents and five siblings, not in a hospital bed; going to school with his friends; playing sports and taking swimming lessons.  He just wants to engage in all the normal activities that children his age get to enjoy and take for granted, and he can't.  Every now and then, when his health allows it, he is able to visit his Catholic school and see all of his classmates there.  As his mother wrote in a December 2017 Facebook post,

"Michael was invited into his third grade classroom today to briefly make a Christmas ornament with his friends. This brought tears to this tired cancer mom's eyes and soul and a grin from ear to ear to our little Michael. The social isolation he has faced since March has been more than most adults can comprehend. His classmates cheered and were so welcoming. They even sang to him. We could not stay long due to low counts, but Michael's smile and laughter was enough to show me that there wasn't much else he would have rather done. His illness has made him appreciate the little things we used to all take for granted." 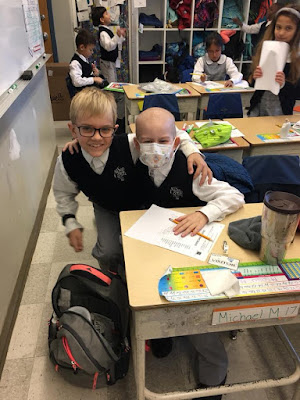 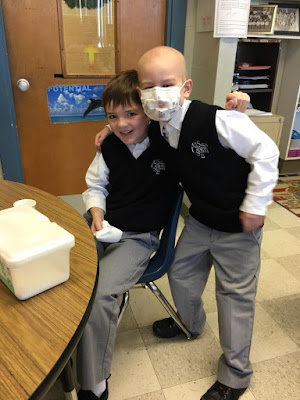 Can you see that he's smiling under his mask in those pictures?  Cancer is trying to wage a war against him, but Michael's heart and soul remain invincible.  He is so brave, and his deep faith is a wonder to behold.

Michael smiles through the agony and can't bear to see his mother looking sad. He apologizes for the inconveniences his cancer causes his family.  He continually thanks his parents and his devoted Nana (who is by his side whenever they can't be), as well as all the members of the hospital staff who care for him.  He continually prays for others as he walks his pain-filled Way of the Cross, offering up his own sufferings for people he knows who are ill or dying.  I can only imagine how the fervent prayers of this young saint-in-the-making sound to the ears of God, and how much good they do for those who need them. 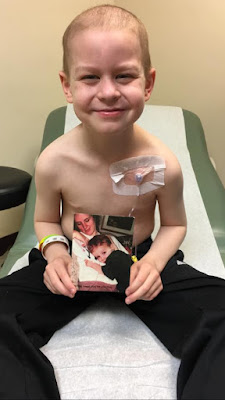 I can't believe that I haven't blogged about this amazing little boy yet.  He is in my thoughts and prayers every single day, and he's one of the people my husband and I always include when we list our special intentions before we pray our daily Rosary.  He has been fighting his epic battle against cancer for about a year now, and like the saint for whom he is named, he has been and is a mighty, courageous warrior. 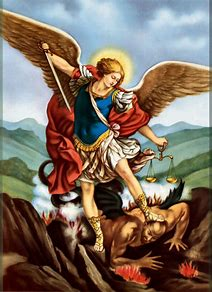 This past November, his mother shared this on Facebook:

"Michael is very weak, many times he has to crawl up the stairs or I have to carry him. He is skinnier than a skeleton and pale and bald, but he is always trying his hardest and never likes to see his mom cry. He’s my world and my reason for living. Strongest 8-year-old I know."

As much as I've wanted to share his story here (if only because it might inspire even one more person--someone who might not have heard of him otherwise, had they not stumbled upon this site--to offer much-needed prayers for him), for some reason, I have not mentioned him yet at String of Pearls.  I think it's because I am so profoundly sad about the illness that is robbing him of so much of his childhood, and at the same time so profoundly moved by the way he has faced all the pain and fear and loss of normalcy with an almost otherworldly strength.  His story is too big, too important, too hard to put into words that will do it justice.  Just as I have not been able to sit down and write the story of my father's poignantly beautiful last week on earth, I have not been able to write about this extraordinary child and the tremendous cross he has been chosen to carry, either. For how can I possibly do him justice?  If he isn't a saint living among us, I don't know who is.  How can I ever rightly convey the magnitude of his courage and grace, his acceptance of the unacceptable? 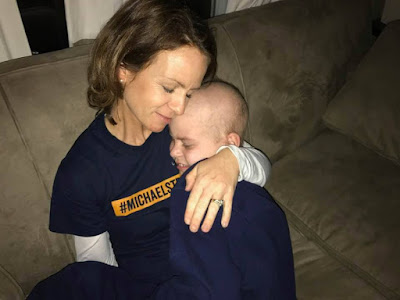 Perhaps the best thing to do is to share with you some more thoughts about Michael in the words of his dear mother, who is suffering every pain along with her beloved son.  I can't even imagine how excruciating it is for her to see her boy suffer so. Her heart has been pierced by a sword and she is in need of your prayers, too, during the next three years that Michael is receiving treatment for his leukemia.   (These quotes can be found on Michael's Caring Bridge site, if you are interested in reading more about him and following his story as updates are added.) 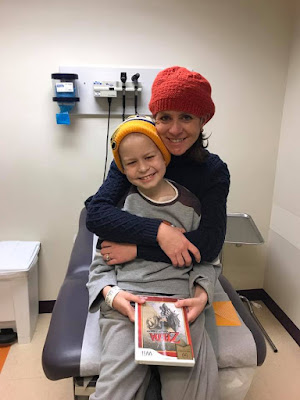 As hard as it is for this loving mother to leave her other five children in the care of nannies much of the time while she's in the hospital with Michael, when all she ever wanted to do was be a SAHM and care for her brood herself, she writes:

"...as a family, we will do whatever we need and must do to save Michael’s life. He’s one amazing fighter. Rarely complains and trust me being held hostage in this prison (hospital) is hard on an adult, I can’t imagine doing this at age 8. He continues to teach me patience, the value of suffering, and being tough and willing to fight no matter how much it seems TOO HARD. I  hate saying this, but he was 'picked' for a reason."

"Michael never ceases to amaze us with his smile that can light up any room, courage, perseverance, faith that is stronger than anyone we know, and love... Suffering, or watching such a young boy suffer, is something so indescribably painful it's hard to put into words. We love Michael more than life itself. The fear of this cancer trying to take our son is beyond terrifying. Oh how we wish we could go back to the days before cancer, when we thought life had its challenges! Our local priest, who has become like family and who Michael absolutely LOVES, has reminded us that Jesus is with us in our pain, He will not abandon us and we must stay close to Him and our Faith.

I will share one short story with you. Because we are never able to get michael to eat anything due to the chemo-induced nausea.....when he asked for a five guys hamburger the other day we were shocked! We masked him up and took him in to let him order a hamburger. However, right away, we noticed him sitting in a chair tears streaming down his eyes making his mask wet. I said, "Michael, why are you crying? We never leave the house and you are the one who wanted to do this. What is wrong?" He looked to the corner of the restaurant where a very clearly homeless man was looking down at his table, with no food on it, but a couple peanuts he had gotten out of the free peanut bucket. Michael said, "Mom, if he cannot eat, then I refuse to eat. I want him to have my food." I told Joe about the situation and Joe gave Michael enough money to keep the sweet cold homeless man comfortable for a while. Michael's eyes lit up with joe and he ran over to the homeless man and said, "Hi! My name is Michael and I have cancer. I want you to have warm food and money. I love you!"If you haven't learned a lesson from this boy.....I'm not sure what to say."

I'm not sure what to say either.  Because as I said before, when I grow up, I want to be just like him.  He is a role model for us all.  That beautiful, touching story about his love for a homeless stranger reminds me so much of things I've read about Blessed Pier Giorgio Frassati, who was always similarly concerned about helping the poor, even when he was just a young boy like Michael. 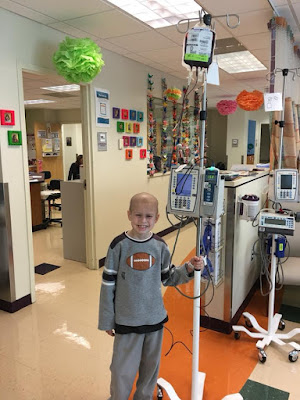 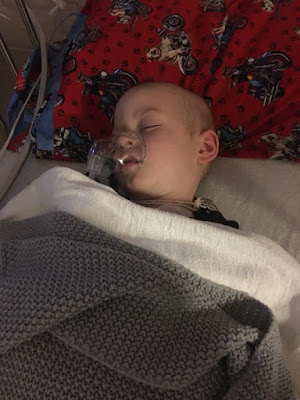 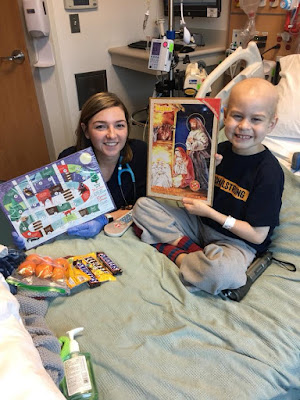 Please pray for this special boy to be completely cured of this dreaded disease.  Pray that God will continue to give him the strength to endure the years of treatments ahead of him.  And please keep his beautiful family in your prayers as well.  They're suffering right along with him. 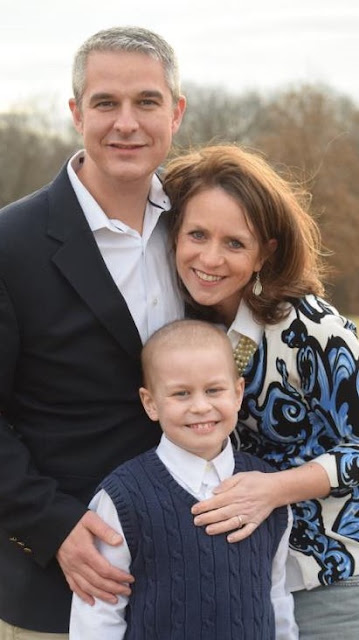 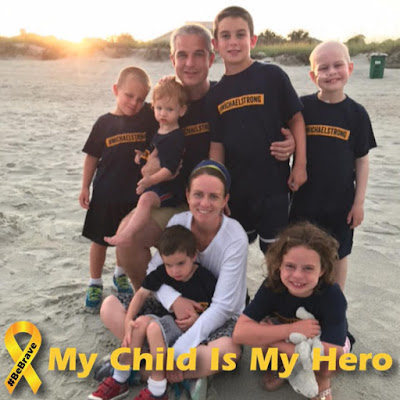 As the #MICHAELSTRONG T-shirts say on the back, "PRAY FOR MICHAEL, In It to Win It."  Pray, my prayer warriors.  Pray as if this boy's life depended on it...because it does. 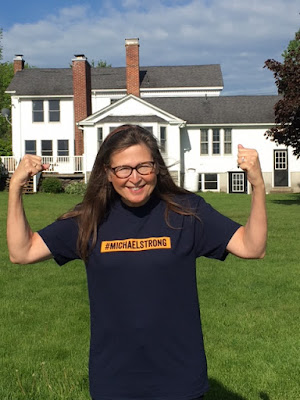 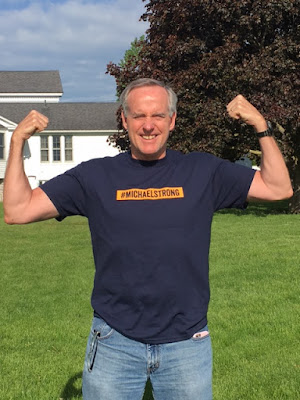